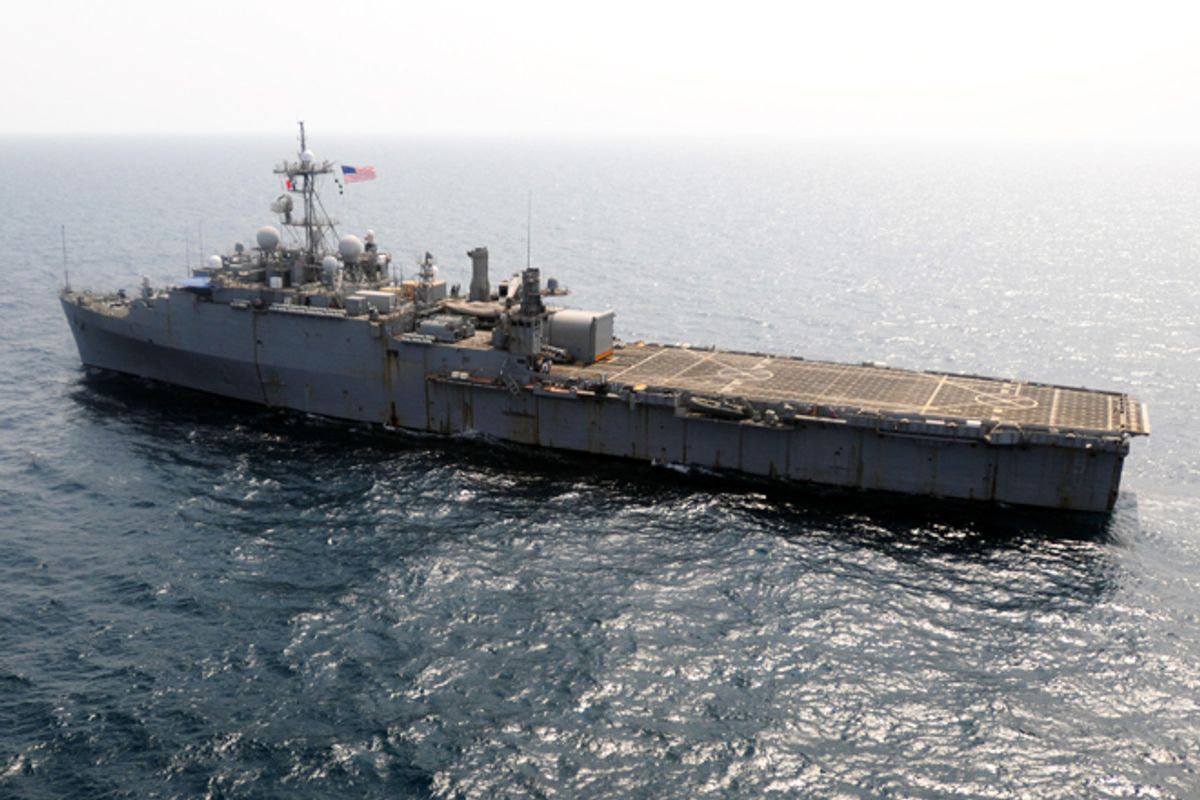 What if there were a piece of legislation in Congress today that had broad bipartisan support along with the strong backing of the military and the most powerful business interests in the country? That seems almost unheard of in today’s polarized world, so it should sail through Congress, right? Well, 34 senators, led by Tea Party hero Jim DeMint of South Carolina, effectively killed it last night. The Law of the Sea Treaty (which goes by the unfortunate acronym LOST) would codify a host of international navigational, territorial and mineral exploration rules that the country has abided by since the Reagan administration. But a faction of Tea Party senators have secured enough opposition to stop the treaty before it even makes it to the Senate floor.

On one side of the fight were some of the interest groups most friendly to Republicans -- big business, including the oil and gas industry, and the military. The U.S. Chamber of Commerce and dozens of other major business organizations made passing the treaty a top priority. “As the world’s pre-eminent maritime power with one of the longest coastlines, the U.S. has more than any other country to gain,” chamber president Tom Donohue testified before the Senate Foreign Relations Committee last month. The chamber, along with the National Association of Manufacturers and the American Petroleum Institute (the oil and gas lobby), took out a full-page ad promoting the treaty and lobbied aggressively for it.

The military was on board too, as four admirals and two generals with 24 stars among them testified in June. “This convention is absolutely essential to strengthening our position in the world,” Defense Secretary Leon Panetta said at a separate hearing, which also featured testimony from Secretary of State Hillary Clinton and the chairman of the Joint Chiefs of Staff, Army Gen. Martin Dempsey, in a rare joint appearance.

Every living Republican secretary of state -- Henry Kissinger, George Shultz, James Baker, Colin Powell, and Condoleeza Rice -- signed a joint Wall Street Journal op-ed calling on the Senate to ratify the treaty. “The continuing delay of U.S. accession to the convention compromises our nation's authority to exercise our sovereign interest, jeopardizes our national and economic security, and limits our leadership role in international ocean policy,” they wrote in late May.

On the other side was the Tea Party, who saw the treaty as a "U.N. takeover" of the sea, as the conservative Daily Caller put it today. That kind of thinking led Clinton to mock critics of the pact as believing in “black helicopters,” a reference to conspiracy theories about a secret U.N. plot for a global government. “If we give up one scintilla of sovereignty that this country has fought for, bled for, have given up our treasure and the best that America has, I can’t vote for it,” Idaho Sen. Jim Risch told Clinton during her testimony.

This led to some awkward interactions with the interest groups Republicans are generally friendly with. At one point, lobbyists from Shell and Exxon, which supported the treaty, went to meet with Oklahoma Sen. Jim Inhofe, who is one of the most conservative lawmakers in Congress. According to sources familiar with the situation, halfway through the meeting, staffers from the conservative Heritage Foundation, which opposes the treaty, appeared unexpectedly to challenge the oil lobbyists. It was a complete ambush, the sources said.

Otherwise, Republicans tried to ignore their allies. Sen. Marco Rubio, the Florida Republican with national ambitions, didn’t attend a single hearing, according to the sources, and signed DeMint’s letter opposing the treaty almost immediately. When Donohue, the chamber president, testified along with API and others, Inhofe and Risch didn’t bother showing up, either.

At the hearing with the admirals and generals, Inhofe, DeMint and Risch aggressively challenged the military leaders, accusing them of misrepresenting their opinions in order to toe the line of the Obama administration, which supports the treaty. “Your [boss] is the president of the United States. He's the commander in chief. So you're going to naturally reflect anything that comes from -- you have to. You're military, and I understand that,” Inhofe said. “What I'd like to do is -- is suggest that, maybe, after your retirement, you might change your mind.”

Military officials are supposed to heed the administration’s line -- unless asked not to. An Army handbook on testifying before Congress explains, “If asked to express your personal opinion, specify how it differs from the President’s recommendations.” When asked for their personal opinions in the hearing, all of the flag officers said they supported the treaty.

While the opposition may have started with people like DeMint and Inhofe, it quickly spread. George Sen.Johnny Isakson, a member of the Senate Foreign Relations Committee, had seemed open to ratification early on. On May 30, he was confronted outside a constituent event by a handful of people waving Gadsden flags, the Tea Party’s emblem, and armed with signs opposing the treaty. Yesterday, he joined Portman and Ayotte in effectively killing the treaty.

But most of the pressure may have come from within the Senate. DeMint controls a powerful political operation with a penchant for primarying Republicans he disagrees with. Implicit in any issue he gets passionate about is the threat that he will oppose you if you don’t support him. And senators would need to look no further than at Sen. Dick Lugar, who sits on the Foreign Affairs Committee and chided his colleagues for suggesting the military leaders were hiding their true opinion. (“This theory relies on a simplistic understanding of how military decisions are made,” he said.)

Lugar, a well-respected moderate on foreign policy, lost his Republican primary in May. “DeMint plunged $200,000 into the Club for Growth super PAC just before the group helped topple" Lugar, Politico reported at the time.