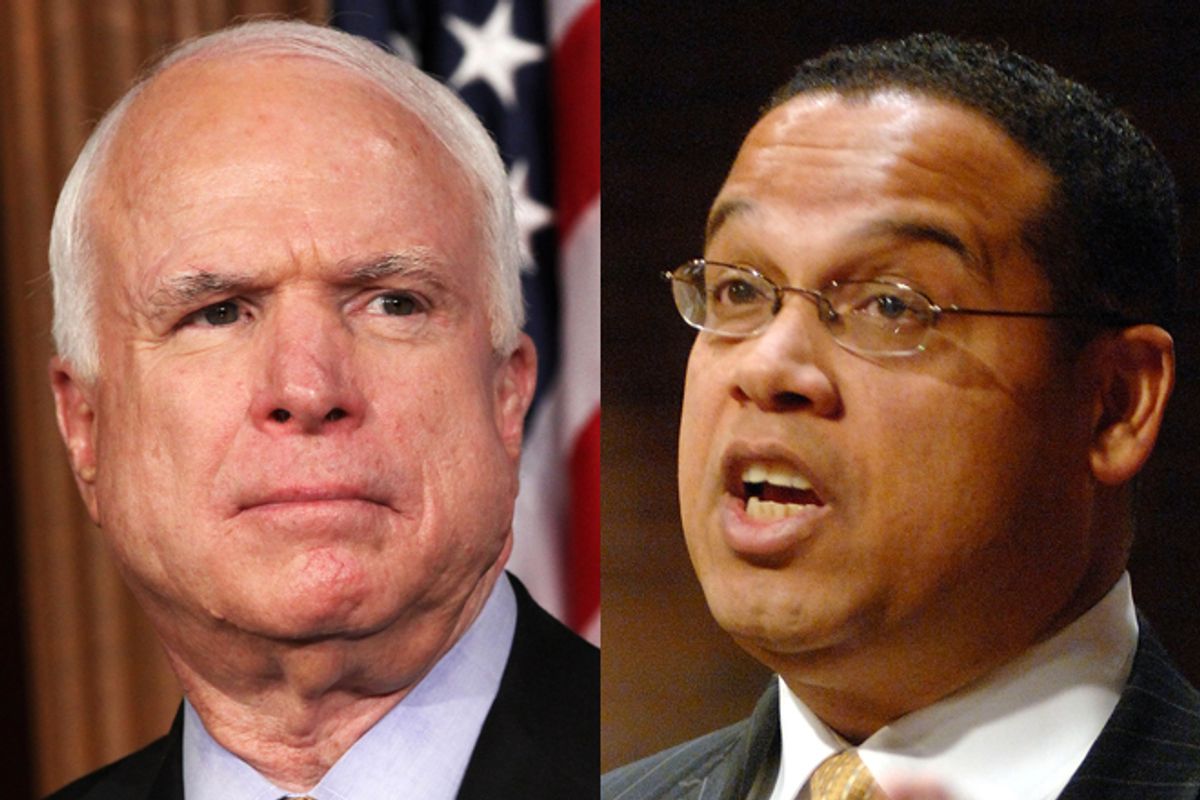 Democrat Keith Ellison fired back today at his fellow Minnesota lawmaker, Republican Michele Bachmann, with a letter excoriating her for failing to provide evidence to support her witch hunt against Muslims in the U.S. government. Meanwhile, Sen. John McCain became the first Republican to speak out against Bachmann's McCarthyite campaign, delivering a bold and moving floor speech on her "specious" charges.

Ellison had earlier requested documentation to support Bachmann’s claim that there is a “deep penetration” of Muslim Brotherhood agents into national security agencies, but he wrote today, “A careful review of your 16-page response reveals that you fail to provide any credible evidence for your claims, engage in guilt by association, and continue to rely on discredited sources.” Bachmann’s lengthy missive, sent last Friday, “simply rehashes claims that have existed for years on anti-Muslim websites,” he wrote.

Bachmann had targeted by name Huma Abedin, a top aide to Secretary of State Hillary Clinton and the wife of former Rep. Anthony Weiner. Ellison notes, “You provide absolutely no information about Ms. Abedin herself” and “fail to explain your claims regarding Ms. Abedin’s mother and brother,” whom Bachmann had also implicated without explanation. Indeed, the allegations against Abedin are wildly tangential, at best.

Ellison also goes after Bachmann’s sourcing, especially Frank Gaffney, a former defense official who has made a career out of smearing Muslims and even conservatives who are too friendly to them. "Your response does not address concerns about the primary source of your information, MuslimBrotherhoodinAmerica.com, which you reference prominently in your letters. The founder of that Website, Frank Gaffney, has a long history of making unsubstantiated anti-Muslim allegations ... Your response fails to explain how your claims are any more credible than Mr. Gaffney’s accusations against these individuals."

Finally, the Minnesota Democrat, who was the first Muslim elected to Congress, makes an oblique but clear comparison to McCarthy by quoting Edward R. Murrow, the TV newsman who helped take down the senator. "We must remember always that accusation is not proof, and that conviction depends upon evidence and due process of law."

Meanwhile, across the Capitol, McCain said from the floor, "To say that the accusations made in both documents are not substantiated by the evidence they offer is to be overly polite and diplomatic about it ... It is far better, and more accurate, to talk straight: These allegations about Huma, and the report from which they are drawn, are nothing less than an unwarranted and unfounded attack on an honorable citizen, a dedicated American and a loyal public servant."

“Ultimately,” the Arizona Republican continued, “what is at stake in this matter is larger even than the reputation of one person. This is about who we are as a nation, and who we aspire to be. What makes America exceptional among the countries of the world is that we are bound together as citizens not by blood or class, not by sect or ethnicity, but by a set of enduring, universal, and equal rights that are the foundation of our Constitution, our laws, our citizenry, and our identity. When anyone, not least a member of Congress, launches specious and degrading attacks against fellow Americans on the basis of nothing more than fear of who they are and ignorance of what they stand for, it defames the spirit of our nation, and we all grow poorer because of it.”

UPDATE: Bachmann apparently responded to McCain in a statement, though she ignored what McCain actually said and did not address him directly. Bachmann defended her letters to the inspectors general of several national security agencies calling for investigations in Muslim Brotherhood infiltration, saying, “ I will not be silent as this administration appeases our enemies instead of telling the truth about the threats our country faces.”