The real question about Mitt isn't "What is he hiding?" It's "Why didn't he clean up his act years ago?" 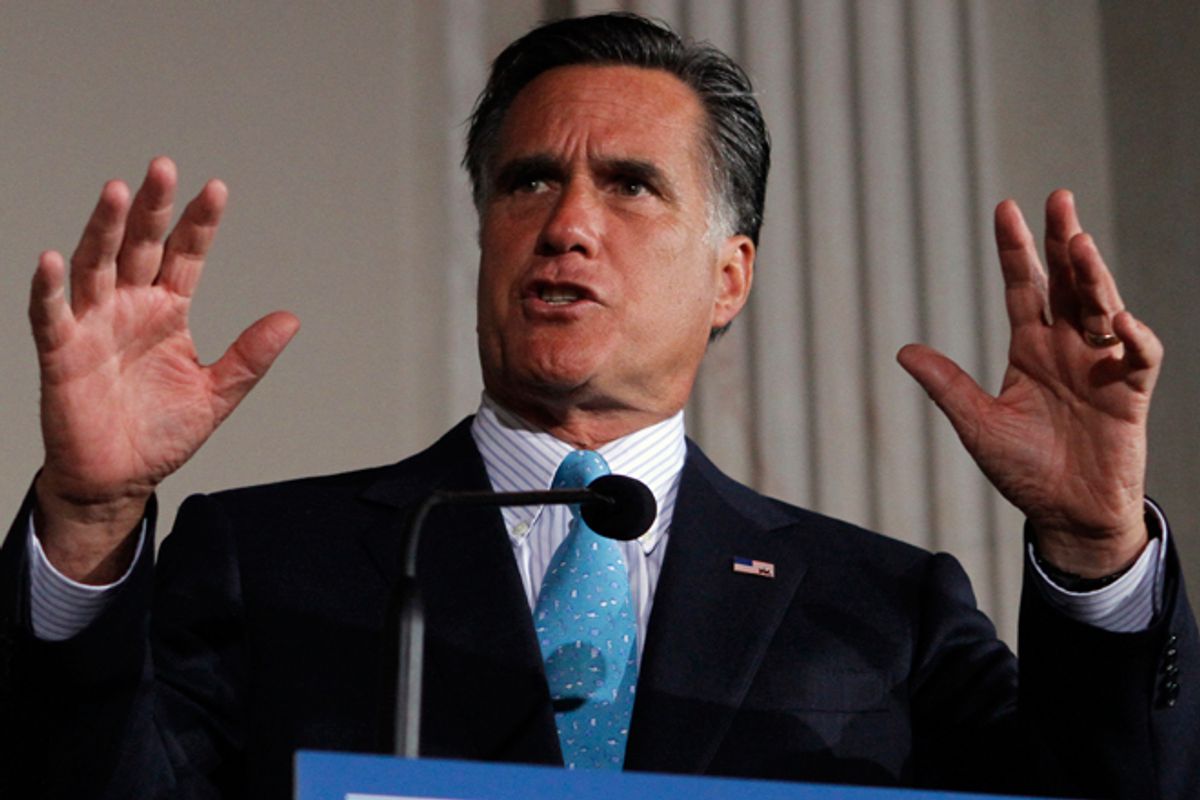 I would have to indulge in imaginary numbers to count the number of times I've agreed with George Will and National Review, but there's a first time for everything. Both Will's declaration on ABC's "This Week" that "the cost of not releasing the returns are clear ... therefore, he must have calculated that there are higher costs in releasing them," and National Review's call for Romney to stop the bleeding and release his tax returns make unarguable sense. The longer Romney delays, the more opportunities he gives the Obama campaign to hammer him and the more he makes people suspect that he's hiding something really nasty.

The speculation as to what dark political nightmares might be lurking in those filings ranges from the amusing to the outrageous. Some theories: Mitt doesn't want the Republican base to see that he and his wife made big donations to Planned Parenthood! He doesn't want to reveal that he accepted an IRS amnesty for his Swiss bank account! Worst of all, he doesn't want the American public to know that he paid no taxes in 2009!

The last charge is certainly the most politically pertinent. Romney endured a firestorm of criticism when his release of his 2010 return (which he had resisted) showed that he paid taxes at the 13.9 percent rate. One can understand why he wouldn't want to experience a far worse blow-up if he'd paid nothing at all a year earlier. The consensus of tax experts appears to be that such a scenario is unlikely but possible. 2008 and 2009 were very bad years for rich people -- the Great Recession hammered the stock market. It's conceivable that Romney "harvested" big stock losses to offset his tax liability. Combined with a very aggressive offshore tax-sheltering strategy, it's definitely technically possible that he could have gotten away with tax murder.

After all, we already know that Romney has parked money offshore in Bermuda, the Cayman Islands and Switzerland. (Anybody interested in this topic who hasn't read Vanity Fair's exposé of Romney's finances needs to start there.) For decades Romney has been pursuing strategies designed to lower the amount of taxes he pays in the United States. And not only does he see nothing wrong with that -- "I pay all the taxes that are legally required and not a dollar more" -- but he is also campaigning on an explicit agenda of further lowering taxes for people in his own tax bracket. He doesn't like taxes! We get it.

But it's still all inexplicable and confusing. This is not the expected behavior of someone who wants to hold the highest office in the land. It's bad enough that the son of a man who set the template for modern presidential candidates by releasing 12 years of his returns can't be persuaded to release more than one year (plus an estimate for 2011). But one would tend to expect that a man who has been doing nothing but run for president since 2006 would take pains not to engage in tax-avoidance strategies guaranteed to make him look bad politically.

But one would be wrong. Because quite obviously, Romney screwed up. The only thing we can say for sure about his tax strategy is that he didn't manage his affairs as a serious presidential candidate should have. So maybe the question we should be asking instead of, What is he hiding? is, Why didn't he clean up his act years ago?

And the answer to that question, I would argue, is that Romney is unable to escape who he truly is: a card-carrying member of the 1 percent who believes it is his right, nay, his duty, to minimize his taxes. Because there's certainly nothing unusual about a man in Romney's position (minus the presidential aspirations!) purchasing the best low taxes money can buy. It's standard behavior for Fortune 500 corporations -- just like the outsourcing and offshoring strategies that Bain (with or without Romney technically at the helm) invested in. In this world, an offshore Cayman account isn't the exotic scam that it seems to you and me -- it's a marker of wealth and position, like a membership in an elite country club, or horses in a stable, or a pair of Cadillacs in the garage. It's what you do! It's what's expected.

It's still amazing that someone as smart as Romney didn't understand that in an era of growing income inequality and increasing economic hardship, the combination of ostentatious wealth and aggressive tax avoidance would rub a lot of voters the wrong way. But that fact in itself explains the country's current predicament -- the wealthiest Americans have become so disconnected from the rest of us that they simply can't conceive of the political ramifications of their actions. They don't get that it looks bad. Or at least Romney didn't, until it was too late.