W: The last guy Mitt wants in the news

Bush is back! And this time he’s not hiding in an elevator! 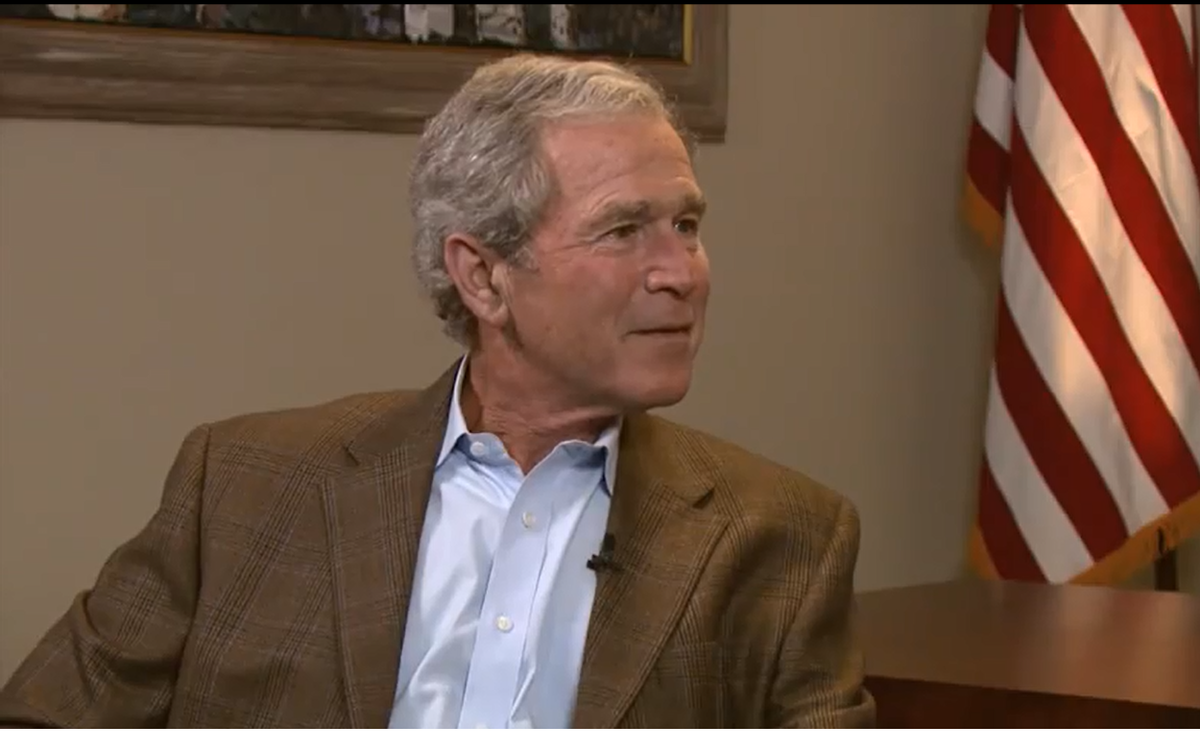 Maybe there’ll come a time somewhere in the future when a Republican presidential candidate jumps at the chance to associate himself with George W. Bush, but we’re not anywhere near that point yet.

In 2008, John McCain kept as much distance from the then-president as possible, appearing with him for a brief, perfunctory endorsement announcement at the White House and relegating him to a pre-taped video appearance at the GOP convention in St. Paul. This time around, Bush was absent when his parents offered a high-profile show of support to Mitt Romney in March, confirming his backing of the presumptive GOP nominee weeks later in a quick, off-camera comment to a reporter while boarding an elevator.

But by the minimal standards of his post-presidency, Bush is really stepping out this week. First, he unveiled a new book that purports to offer a road map to sustained 4 percent economic growth. Then he agreed to an on-camera interview with the Hoover Institution’s Peter Robinson, who wrote speeches for George H.W. Bush and Ronald Reagan in the 1980s. The presidential race came up only once during their hour-long chat, with Bush explaining that he doesn’t want to be in the political game anymore, but that “I’m interested in politics. I’m a supporter of Mitt Romney. But, you know, he can do well without me.” Still, that’s more than Bush has previously had to say on the subject, guaranteeing that it will make news.

In fairness, Bush’s low profile since 2009 isn’t entirely attributable to his pariah status. His father made a point of stepping back from politics after leaving the White House in 1993 and not publicly weighing in on his successor’s administration. In part, W is simply affirming this tradition. But in the 1996 presidential election, the elder Bush was granted a prominent prime time role at the GOP’s national convention, and Bob Dole made a point of conferring with him at the height of the general election campaign.

By contrast, Romney and his fellow Republicans have spent the last three years doing their best to pretend W’s presidency never happened, acknowledging him only when they’re forced to and changing the subject as quickly as possible. The politics are understandable: The GOP’s strategy since 2009 has been to channel the public’s intense economic anxiety into a backlash against Obama that will restore control of the legislative and executive branches to the GOP. That much of the country’s suffering can be linked to the epic economic meltdown that came on W’s watch in 2008 is not something they’d prefer anyone to dwell on.

But, polls show, most voters do remember what happened in 2008 and who was president at the time. This offers President Obama a potential opening to win reelection under economic conditions that you might think would doom an incumbent president. As I’ve noted before, there is research that suggests Obama’s approval rating and standing in head-to-head match-ups with Romney is significantly better than it should be based on the state of the economy – evidence, it would seem, that the uniquely catastrophic circumstances under which he came to power are affording him the benefit of the doubt from some voters.

In that sense, Bush’s reemergence this week is only bad news for Romney, and only good news for Obama. So it’s not surprising that the president scheduled a campaign swing through Texas this week, playing the Bush card without actually mentioning his predecessor’s name:

“We spent almost a decade doing what they prescribed,” Mr. Obama said. “And how did it turn out? We didn’t see greater job growth. We didn’t see middle-class security. We saw the opposite. And it all culminated in the worst financial crisis in our lifetimes, precisely because there were no regulations that were adequate to the kinds of recklessness that was being carried out.” He added, “I don’t know how you guys operate in your life. But my general rule is, if I do something and it doesn’t work, I don’t go back to doing it.”

It’s possible the Obama campaign’s attacks on Romney's Bain background or his own tax return stonewalling will end up costing Romney a critical point or two (and thus the election) in November. But if Obama survives this campaign, it seems far more likely it will be because voters remembered exactly what he inherited in 2009 and exactly whom he inherited it from.