English teacher: I was wrong about "Hunger Games"

I urge my students to read smart new books. But it turns out that acclaimed literary fiction isn't better than YA 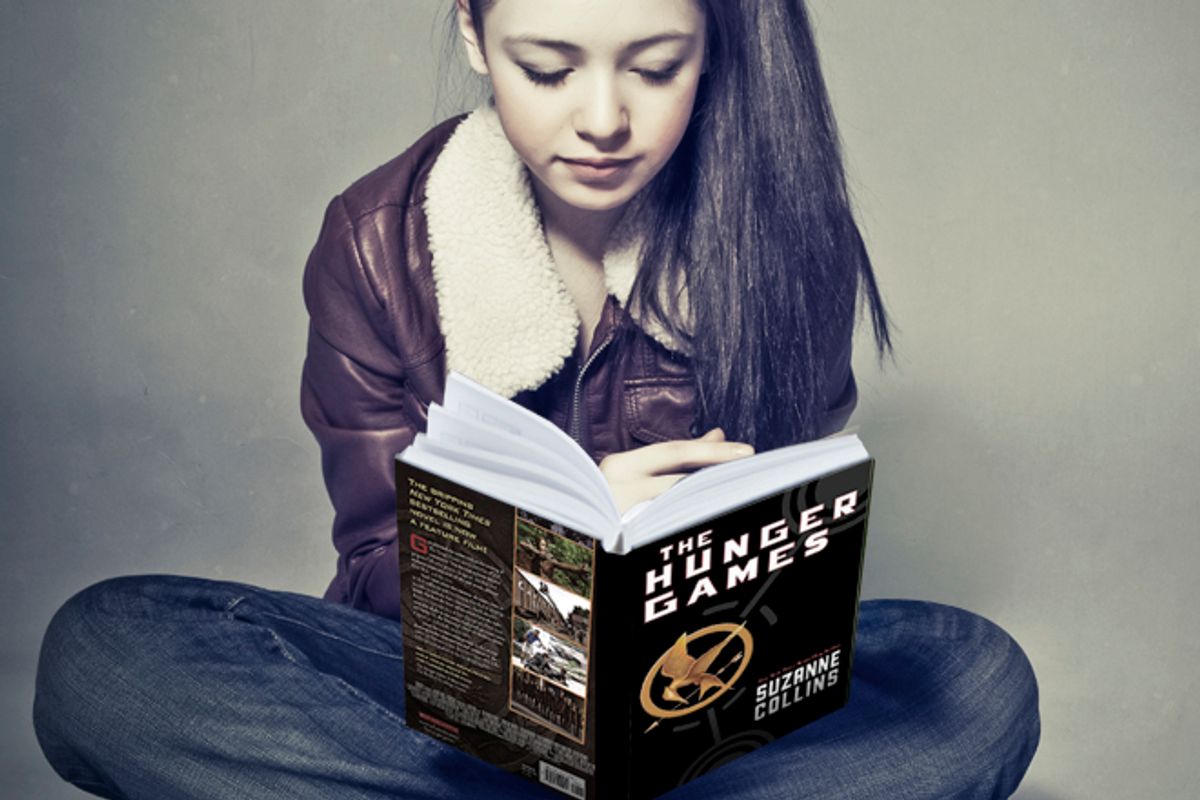 With so many adult readers of the Harry Potter, Twilight and Hunger Games series, journalists are more frequently asking the question, What, if anything, separates literary fiction from genre fiction in general and young adult fiction specifically? It’s a question that was academic for me until one of my students — let’s call him James — asked me what work of adult “literary” fiction — finger quotes, his — he should read this summer. I mentioned Chad Harbach’s "The Art of Fielding." Though I hadn’t read it yet, I’d scanned a dozen reviews extolling its virtues. James is a baseball player, and the novel is about baseball. After checking with a local librarian to make sure there was nothing too inappropriate for a rising high school freshman, I borrowed it and lent it to James. What could go wrong?

As it turned out, nothing. James loved it. He emailed me last week to report that he couldn’t stop turning the pages. But he still didn’t understand. Why was "The Art of Fielding" more “literary” than "The Hunger Games"?

Planning on citing Harbach’s linguistic gifts or the complex relationship between his characters, I read the novel carefully; then I re-read it; and I still don’t know how to answer James’ question.

"The Art of Fielding" — a novel about Henry Skrimshander’s college baseball career, his teammates, and the college president who is in love with Henry’s roommate — was one of 2011’s most critically successful. (It is newly available in paperback.) The New York Times listed it as one of the top five novels of the year; GQ, the best; and the New Yorker, one of the best. In all the reviews in these publications, Harbach’s résumé is foregrounded as if to underline his novel’s seriousness, and I am convinced that its success is a product of the literary establishment celebrating a plot-heavy book it can pretend is sophisticated. Read this baseball book, reviewers exclaim, and feel pride in your intellectual labor! There’s nothing wrong with "The Art of Fielding" if you’re merely seeking entertainment, but if you’re looking for even a little bit more, look elsewhere. If Suzanne Collins had attended Harvard, founded n+1, and written essays about environmentalism and David Foster Wallace, her book could have been considered equally worthy of critical and intellectual respect. Which is all to say: "The Art of Fielding" is a simplistic children’s book in a grown-up costume.

Its many defenders have responded by citing "The Art of Fielding’s" adult tics: namely, its references to Melville, depictions of gay and straight sex and perspective switches among complex characters. So let me take these point by point.

First off, Melville: Harbach’s references to Moby Dick and its author may be frequent, but they are superfluous to his novel’s plot or themes. My eighth-graders could invent an English-class response about how Skrimshander’s — “skrimshander” is Melville’s term for a young seaman — baseball career has something in common with Ahab’s quest for the white whale. But my students would be making stuff up. Whereas Ahab risks his own life and the lives of his crew for an unachievable goal, Henry, quite sensibly, wants to play in the major leagues. Or, if the comparison is between Henry and Ishmael, then what? Just as Ishmael wants to shake off melancholy and see the “watery part of the world,” so Henry wants to play major league baseball? Literary allusions are not enough to make a work literary. In the New Yorker, Wyatt Mason makes a form of this argument: “The Lowell reference, for example, isn't incidental: it's from ‘The Quaker Graveyard in Nantucket,’ a Melvillian poem about death and water and whales and God, and is part of a pattern of Melvillian references that run playfully and purposefully through the novel. The Westish College president has the conspicuous and partly Melvillian name Guert Affenlight. (Guert Gansevoort was Melville's first cousin.)” But allusions without resonance are merely manifestations of self-indulgence. If "The Art of Fielding’s" structure or characters recalled "Moby Dick’s," the references might have deepened Harbach’s work, but as is, they are merely cosmetic and consequently distract from the moments when Harbach writes successful plot developments.

Secondly, sex: Though it’s true that there is semi-explicit eroticism in Harbach’s novel, his depictions of sex are far less graphic than Collins’ violence. "The Art of Fielding’s" most vivid sex scene occurs between Skrimshander’s roommate and the president of the college: “He used his hands to work out the intricacies of the slacks and undershorts and brought Affenlight out into the open -- Affenlight, strange synecdoche! -- and bent and kissed him on the tip of the penis in a womanly way." Compare that with “A boy, I think from District 9, reaches the pack at the same time I do and for a brief time we grapple for it and then he coughs, splattering my face with blood.  I stagger back, repulsed by the warm, sticky spray.  Then the boy slips to the ground.  That’s when I see the knife in his back." Collins’ violence is sensory and immediate, complete with touch, sight and sound.  It invokes nausea in the character and the reader.  Conversely, Harbach’s sex is full of euphemism, jargon and sterility.  Where the Collins might provoke nightmares, Harbach, once again, adorns the story with adult-seeming ornamentation. But what adult (or teen) thinks of a blow job with the phrase “strange synecdoche”? Instead of literary writing, Harbach garnishes his work with the type of language that feels sophisticated.

Such prosaic sex is a symptom of prosaic characterization. Henry’s roommate, Owen, introduces himself, “My name’s Owen Dunne. I’ll be your gay mulatto roommate.” Even if the comment is initially meant to be self-aware or ironic, the rest of the book belies any attempt at irony by presenting Owen as an archetypical effete. Though he plays baseball, he is not invested in the game, more concerned with the literature he reads in the dugout. Owen is the gay guy just like Schwartz is the big, hardworking, moral guy, and Henry is the incomprehensible cipher. Characters occasionally change in unexplained ways, such as when the previously straight Affenlight falls for a male student, but Harbach never investigates the psychology of such changes. The reader learns in a reductive, caricatured manner what characters are like — “your gay mulatto roommate” or “the prodigal daughter” — and then the characters behave in a manner boringly consistent with that introduction.  There can be lazy characterization in all types of work, but one of the pleasures of literary fiction should be its investigation into the human condition. Adult words do not make adult experiences.

"The Art of Fielding" isn’t immoral or dangerous; it’s simply not a book that adults, or teenagers seeking more than plot, should read. If the literary establishment wants our teenagers to fall in love with literature, it must stop cynically writing and imprudently reviewing books like "The Art of Fielding" as though they were examples of adult literary fiction. There is nothing worth thinking about in it — fancy word choice, sure, but no language that delves into what it means to be human. “The aim of the poet,” Horace taught, “is to instruct or delight, or to combine together, in what he says, both pleasure and applicability to life.” "The Art of Fielding" delights at times, but it never comes close to instructing.

I stole hours from James’ summer vacation when he could have experienced the same kind of pleasure watching a sitcom or thriller.

Brian Platzer is a writer and teacher in New York City. He is currently at work on "Everybody's Wrong," a novel about teachers, terrorism, and a presidential election between George W. Bush and Barack Obama.