Small businesses are not our economic backbone

Getting it straight on job creation 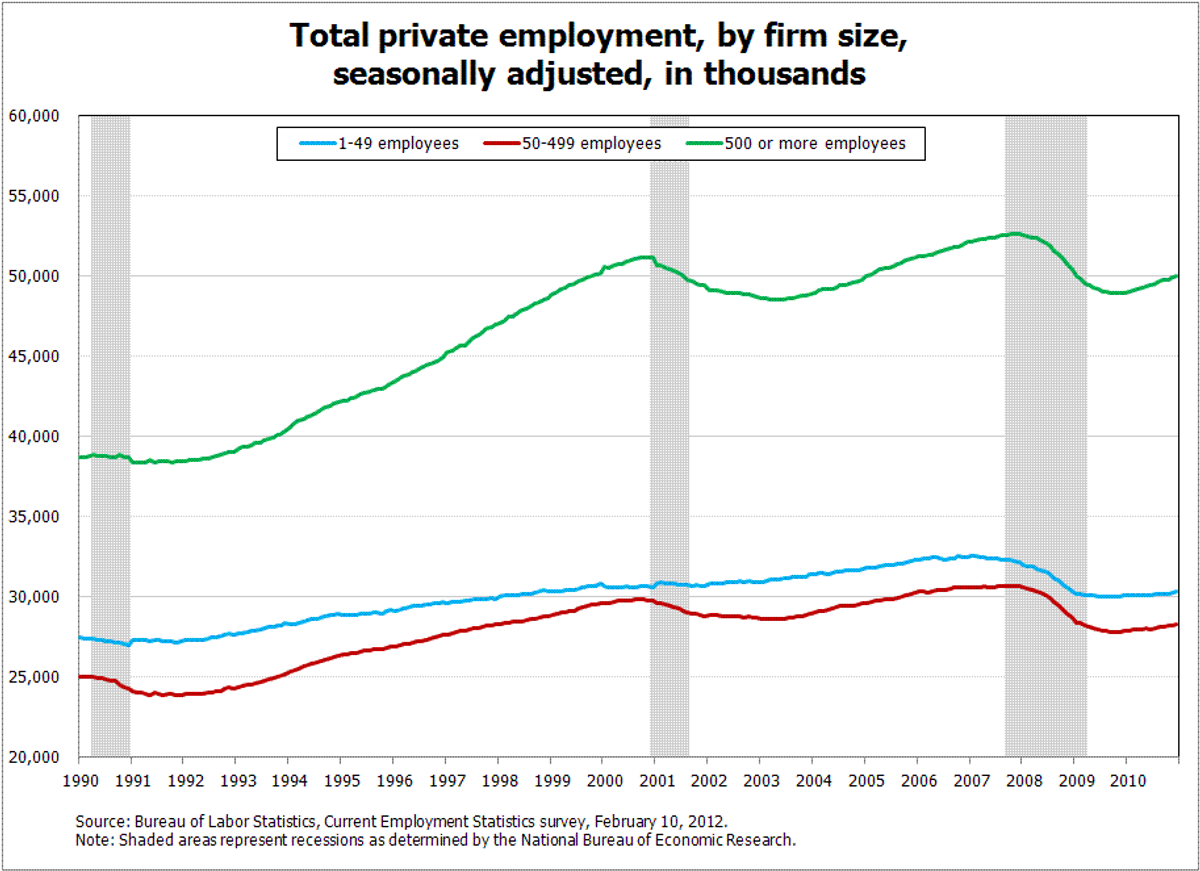 I like small businesses.  I like medium-size and large ones too.  I like 'em all, and while size matters — small firms face different, and often more challenging, hurdles than large ones — I fear we risk systemic distortions if our policies are too dependent on firm size.

But aren’t small firms the job creators? As I’ve stressed before, not especially, despite the fact that you hear this mantra hourly from policymakers of both parties. Some new data on private sector employment by firm size from the Bureau of Labor Statistics is especially revealing.

[This is from a new, experimental data series from the BLS, that is, not yet part of its normal data production — for now, the data only go through March 2011.]

The first figure, from the BLS link above, just shows the time series in jobs by firm size, with the three size classes in the new series as 1-49, 50-499 and 500+: so small, medium and large.  Over the full period the average shares for each don’t change much: 29% of jobs are at small firms, 27% at medium, and 45% at large.  There’s been a small shift — a few percentage points — from medium to large since 1990, but the small shares have been roughly constant at 28-29%. That may surprise you if you’re used to hearing the opposite, which you hear a lot. There’s a reason for the different findings: establishments versus firms.

The BLS data break employment down by firm size, while other sources, like the ADP jobs data — one of the sources of the big-job-creator claims for small biz — do so by establishment size.  That’s not wrong, per se, but when we think about small businesses, most of us are thinking firms, not establishments.

Here’s the BLS definition of the difference:

An establishment is defined as an economic unit that produces goods or services, usually at a single physical location, and engaged in one or predominantly one activity. A firm is a legal business, either corporate or otherwise, and may consist of one establishment, a few establishments, or even a very large number of establishments. [my bold]

In other words, establishments can be units of large firms, but a firm under 50 is truly a stand-alone small business. A Gap outlet with 40 employees is counted in the 1-49 size class in the ADP data — it’s a small establishment. But since Gap is a very large firm, in the BLS data, that 40-person outlet is assigned to the 500+ group.

To be clear, I’m not saying ADP and other surveys that base size of establishment as opposed to firm size are wrong. But I don’t think the Gap, or Apple, or CVS, or UPS are “small businesses” even though they all have some small establishments that get counted that way in ADP-like surveys (ADP, btw, is very forthright about this point — see note at end).

So what kind of difference does it make? Huge.

The figure below shows job growth, in thousands of jobs, by firm size (BLS data) and establishment size (ADP) over the 2000s expansion (November 2001-December 2007).  They tell a totally different story.  While the totals are about identical at around 6 million, the establishment data would lead you to believe that 80% of the job growth came from small businesses (1-49), but when you actually look at small firms — so you’re excluding the smaller outlets of the large firms — you see they punched at just below their weight: they created 26% of the jobs; they account for 28% of total employment over this period. Large establishments were actually a negative over this period, according to the ADP, but large firms accounted for the greatest share of job growth in the 2000s expansion.

If you do the same exercise for the most recent period of job growth, beginning in February 2010 through March 2011 (which is when these BLS data end for now), you get a similar result.  Small establishments created 44% of the jobs over these months; large ones only 5%. But small firms created only 17% of the jobs; large firms, 56%.

This morning I got coffee from Saint Elmo’s Coffee House, a great small firm in my 'hood. I then went next door to a UPS outlet, where one employee was at work. But that doesn’t make UPS a “small business.” More germane, when small businesses are asking for special policy treatment, let’s be clear that it’s the small firms we typically think we’re talking about here, not the small establishments. And those firms are not disproportionate job creators.

The next figure shows what I mean. For the full period of the BLS data, 1990-2011, it plots employment shares by firm size — the averages over the period — against the shares of job gains.  As you can see, small firms (1-49) created a smaller share of jobd than their employment weight and large firms (500+) were the disproportionate job creators. To reiterate, as I’ve always stressed in this discussion, small firms face barriers large firms don’t — access to debt and equity markets, limited cash reserves, export barriers, and less of a cushion in hard times. Public policy should help them overcome these barriers. In fact, given that the NFIB — the hyper-conservative lobbying group — now appears to be more about the Koch brothers’ anti-tax, anti-regulatory agenda than actually helping small firms, groups like the Main Street Alliance are ever more important.

Neither does it make sense to get all wound up about job creation by firm size. It’s far less important than the small-biz-centric discussion suggests. Small startups that survive and grow have been found to be key contributors to job growth (see second link above), but beyond that, many small firms grow, many large ones shrink (regression to the mean), and at the end of the day, we want to see a robust creation of good jobs, regardless of size class.

Note: The ADP is explicit about this firm/establishment difference — at the bottom of its spreadsheet it writes:

“All size data included in the ADP National Employment Report is based on size of payroll.  In some cases, small and medium-size payrolls belong to businesses employing more workers than indicated by the size grouping.”