She's taken the heat for her Muslim witch hunt, but what about the other congressmen who signed her letters? 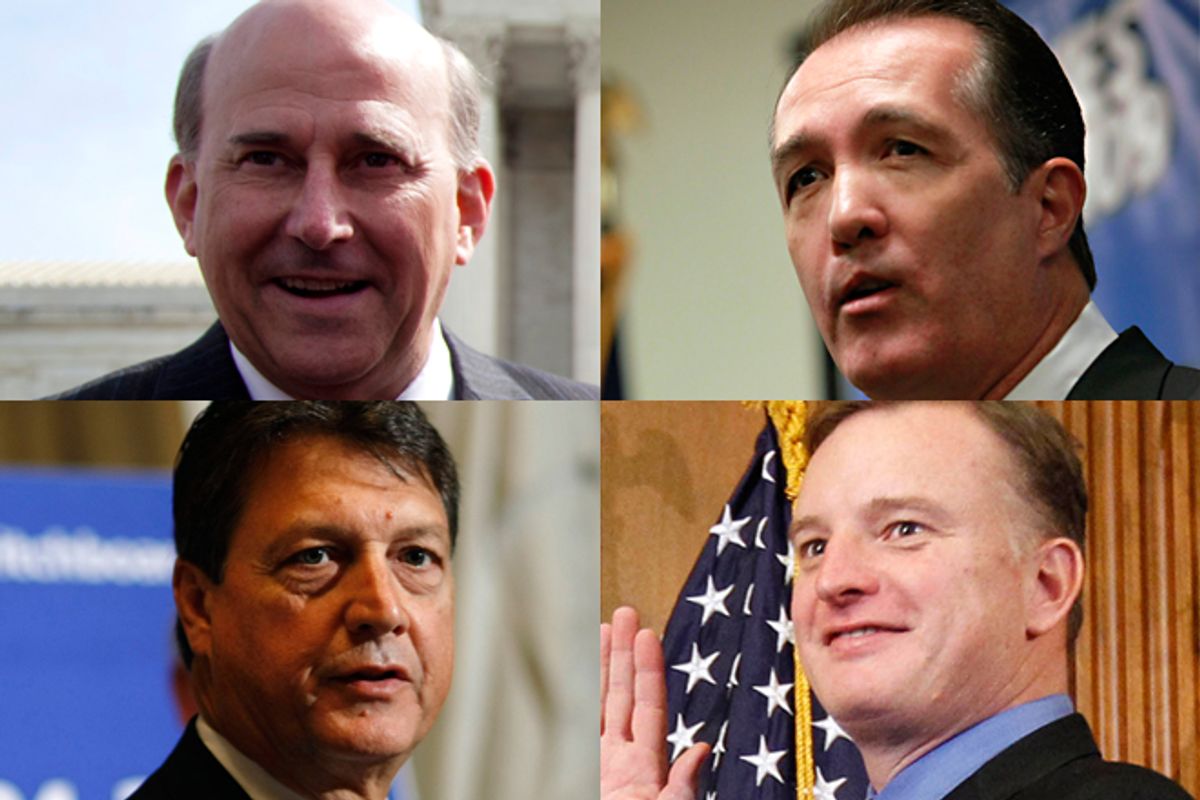 Rep. Michele Bachmann is standing by her quest to investigate unsubstantiated claims of Muslim Brotherhood infiltration in the U.S. government. Glenn Beck said on his radio program today that he spoke to the congresswoman this morning, who told him, “There are decent people up on the Hill that are trying to expose the Muslim Brotherhood, and it is spreading ... This disease is spreading so rapidly, it is breathtaking."

But it’s important to remember that while Bachmann has led this charge, four other members of Congress signed onto her initial round of letters demanding investigations from the inspectors general of five national security agencies, some of whom also have troubling records of Islamophobic conspiracy theorizing.

Rep. Trent Franks, a Republican from Arizona who signed onto Bachmann’s letter, joined three colleagues in 2009 to launch a similar witch hunt against Muslims on Capitol Hill that drew calls of McCarthyism. The four lawmakers alleged that the Council on American Islamic Relations (CAIR), a major mainstream Muslim group, was planting “spies” in lawmakers’ offices. Their evidence came from a book called "Muslim Mafia: Inside the Secret Underworld That’s Conspiring to Islamize America." Franks suspected that Muslim interns and junior staffers placed by CAIR were conspiring to kill the Patriot Act. “One of the target policies that they might be concerned about is the Patriot Act itself -- those things that give us the greatest tools to be able to surveil those conversations outside of this country … and I think organizations like CAIR would like to diminish that,” he said.

As with Bachmann’s witch hunt, the lawmakers went public with their accusations before going to the authorities. “We have not received any request at this time,” a spokesman for the House sergeant-at-arms, who is responsible for keeping members safe, said at the time.

Rep. Louis Gohmert, meanwhile, was making up his own Muslim conspiracy theories before he signed on to Bachmann’s. The colorful Texas Republican, who is closely aligned with the Tea Party movement, took to the House floor and Fox Business in 2010 to warn the world about a flood of terrorist babies invading our shores from Muslim nations. "It appeared they would have young women who became pregnant [and] would get them into the United States to have a baby. They wouldn't even have to pay anything for the baby," Gohmert said on the floor in June of that year. "And then they would return back where they could be raised and coddled as future terrorists. And then one day, 20, 30 years down the road, they can be sent in to help destroy our way of life,” he explained.

Gohmert’s source on this explosive accusation was a retired FBI agent whom he met on an airplane, or at least someone who said she was a retired FBI agent. In a heated interview with Anderson Cooper, Gohmert lost control as he admitted he hadn’t contacted authorities about the terror babies. A former FBI official debunked the claim.

Georgia Rep. Lynn Westmoreland and Florida Rep. Tom Rooney also signed onto Bachmann’s letter, but this seems to be their first anti-Muslim rodeo. Westmoreland did, however, defend the investigation yesterday in an interview with a local TV news station, saying, "We just want to make sure they have understood and have looked at exactly what this group may be doing to participate, just like they have in other governments.”

UPDATE: Cracks may be beginning to emerge in the Bachmann's cohort. In a statement this afternoon, Tom Rooney mostly defended the demand for investigation, but also walked back the accusations against Abedin a bit: “As a member of the House Armed Services and Intelligence Committees, my top priority is ensuring the security of our nation. The tragic events at Fort Hood in 2009 proved that our enemies will go to great lengths, including infiltrating and recruiting members of our military, to commit acts of terror against American citizens. I regret that Mrs. Abedin has become the media focus of this story, because the intention of the letters was to bring greater attention to a legitimate national security risk.”