Sorry, Sarah Palin. The N.J. governor gets to play your attack-dog role in Tampa, savaging Obama to promote Romney 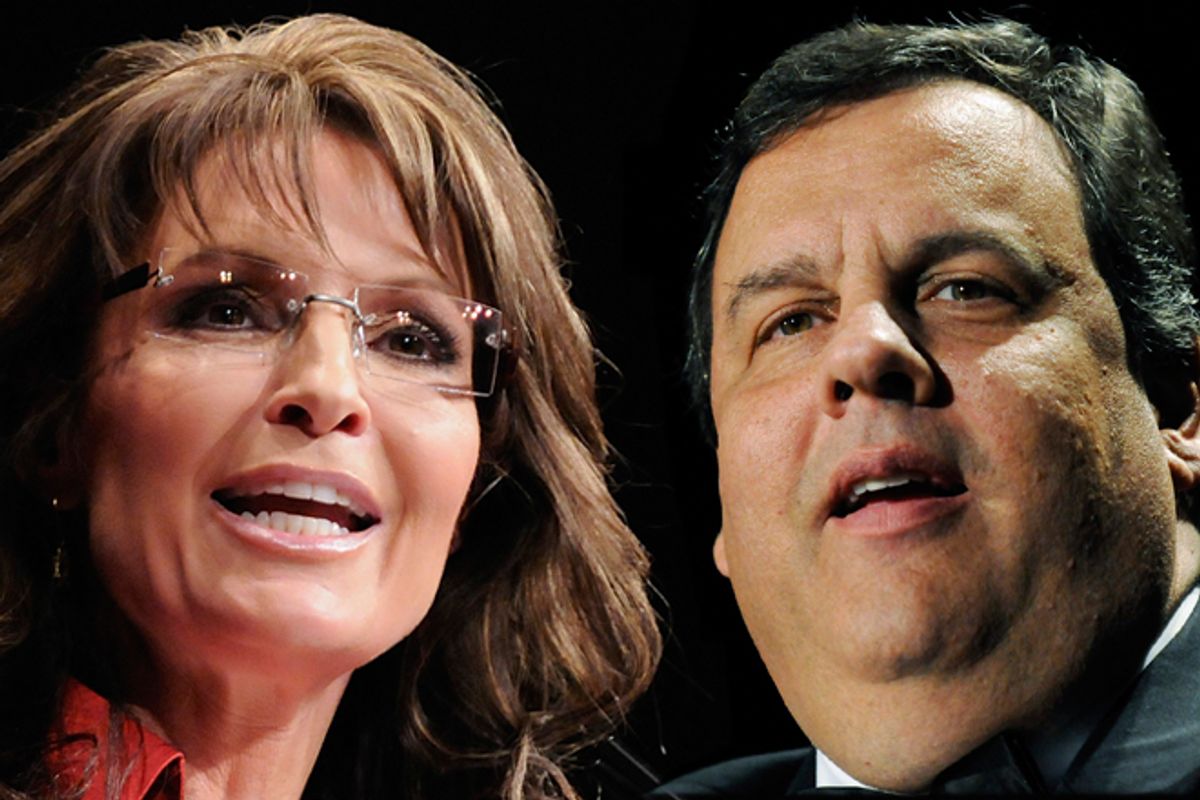 BuzzFeed revealed Wednesday that the Mitt Romney campaign is so desperate, it's outsourcing its strategy to the late Andrew Breitbart. In his last appearance at the Conservative Political Action Committee, Breitbart vowed to launch a "vet the president" crusade, insisting the mainstream media failed to properly vet Barack Obama in 2008. After Breitbart's death, his minions made good on his promise with Obama "scoops" so un-amazing I can't remember them without using Google. Now Romney's folks are promising to use Obama's admitted youthful drug use, his Chicago-politics ties and his overall "foreignness" against him, telling BuzzFeed, "It's time to vet the president … McCain didn't do it."

Oh good: Earlier this week the Romney folks pissed off 2008 vice-presidential nominee Sarah Palin by confirming she hadn't yet been invited to the RNC convention in Tampa. Now they're dissing the man at the top of the 2008 ticket, John McCain. That seems like smart politics.

With the announcement that New Jersey Gov. Chris Christie will be the keynote speaker at the Tampa convention, Romney's strategy is completely clear: He's going to run a campaign that’s long on meanness and short on substance, to capitalize on the GOP's base hatred of Obama and to distract attention from its disdain for Romney. With Christie as keynote, who needs Palin?

Sure, Palin may be the political Queen of Mean, but Christie is its undisputed king. And let me say this about the former Alaska governor (of whom I'm unambiguously not a fan): She has never been caught on camera bullying a constituent. Sure, she sneers at the "lamestream media," but she's never called a reporter an "idiot" to his face, in front of a camera. Palin loved to trash Obama, on the 2008 campaign trail and ever since, but she doesn't seem to get her jollies, publicly at least, humiliating any random person who crosses her.

Also: Again, I'm no fan of Palin, but I think it's interesting that Romney has appeased the Tea Party by flip-flopping and adopting most of its extremist positions, but he can't be bothered to figure out a way to respect and/or flatter Palin by including her, somehow, in the Tampa festivities. On the other hand, he's got a lot of other former rivals to appease in Tampa: Ron Paul, Rick Santorum, Newt Gingrich, Rick Perry and Donald Trump, to name a few. It's no accident that many of the people clamoring for Romney to release his tax returns either worked for or supported those other guys – or are among those other guys. Among those calling for more Romney tax transparency are Perry, Paul, Gingrich ally Rick Tyler, Santorum backers Bill Kristol and John Brabender, and former RNC chairs Haley Barbour and Michael Steele.

As the Huffington Post's Howard Fineman notes, the range of Republicans parting ways with Romney on taxes -- which also includes the National Review and the Wall Street Journal -- seems to point to a party having trouble recognizing Romney as its leader, or expecting him to fail in November, or both. I made that point when former Florida Gov. Jeb Bush and current Florida Sen. Marco Rubio rebuked Romney on taxes and immigration. This is a party in near-meltdown.

Former Nixon strategist Kevin Phillips famously told Garry Wills that "the whole secret of politics [is] knowing who hates who." And Christie seems able to channel hate as well as anybody, which makes sense, since he's the kind of white Catholic "ethnic" Phillips predicted Nixon could pick up from the working-class "sidewalks of New York" (which in Phillips' analysis included New Jersey.)  Christie is the guy who complained about being dissed by his music idol, Bruce Springsteen (Jersey's favorite son won't meet with the Jersey governor), while also attacking Springsteen's politics. He's got some anger issues. Way too volatile to be the VP nominee, Christie is perfect to introduce Romney in Tampa by trashing Obama.

On Tuesday we saw Romney surrogate John Sununu complain that Obama needs to "learn how to be an American," while Romney himself called the president's approach to American life "extraordinarily foreign." In case anyone wondered whether those attacks amounted to an official campaign direction, an anonymous Romney source previewed the fall campaign for BuzzFeed this way: "I mean, this is a guy who admitted to cocaine use, had a sweetheart deal with his house in Chicago, and was associated and worked with Rod Blagojevich to get Valerie Jarrett appointed to the Senate. The bottom line is there'll be counterattacks."

It may just be coincidence that the same day the unnamed Romney official insulted McCain for failing to "vet" Obama, McCain had a moment of decency standing up against crazy Michele Bachmann to defend Hillary Clinton aide Huma Abedin, who's been attacked by Bachmann for her late father's alleged ties to alleged figures friendly to the Muslim Brotherhood. Bachmann is our 21st-century Joe McCarthy, with lipstick. McCain 2008 campaign officials also chose Wednesday to tell reporters they picked Palin as VP because she was the best person for the job. It was a clever way of saying the choice wasn't about secrets in Romney's tax returns, while at the same time diminishing Romney.

In Ohio Wednesday, Romney got credit for replying, when an audience member used the word "monster" to describe Obama, "That's not a term I would use." Bully for him, although it's not the same as McCain calling Obama "a decent family man, a citizen," after a 2008 supporter said he was "an Arab" she "didn't trust." Weirdly, Romney used almost the exact same words when asked to rebuke Rush Limbaugh for calling Sandra Fluke a "slut," saying prissily, "That's not language I would use." Is that as aggressive as Romney's decency-programming gets?

Make no mistake, it's going to be ugly from here to November, as BuzzFeed's Romney sources made clear. The president will get relief, though, when Republicans turn their fire away from him and toward one another.