She won't release tax returns to "you people"

Ann Romney loses patience, while a blogger wonders if Mitt's mistake was simply loving to pay his taxes too much 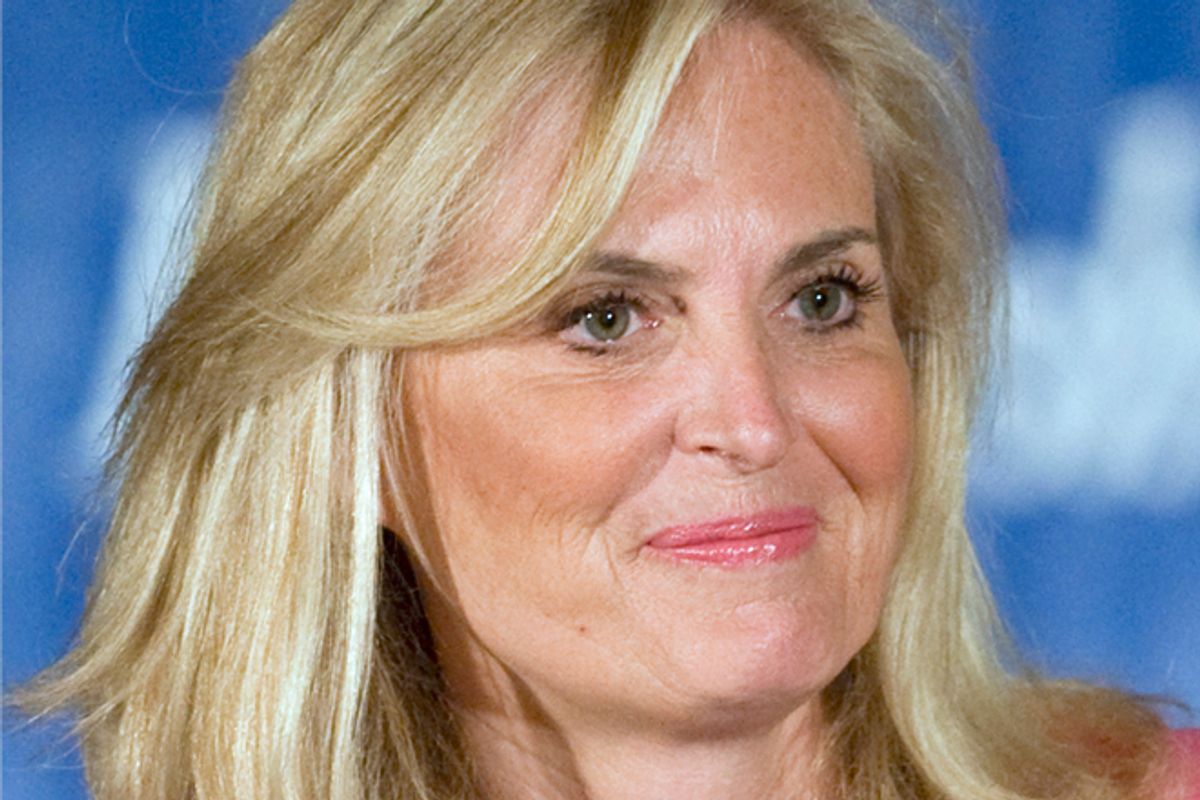 What's Mitt Romney hiding, exactly? Why won't he release his long-form birth certificate college transcripts tax returns? Well, his tax returns are probably just the words "I DON'T HAVE TIME FOR THIS PEASANT WORK I'M QUITE RICH YOU SEE" scrawled in a Montblanc on an otherwise blank 1040EZ, but we'll likely never know: He refuses to release any returns from prior to 2010 (he claims he'll get around to showing us his 2011 return), which is all sort of weird because the guy has been planning on running for president for a while, and one thing presidential candidates do is release a whole bunch of tax returns, a practice pioneered by this guy named George Romney, the kindly puppeteer/scientist who crafted/programmed young Willard.

Ann Romney, whose horse is competing in the Olympics, went on the TV to patiently explain that, no, the Romneys would not be sharing any more information on their finances. This is an actual thing she said, on ABC: "“We’ve given all you people need to know and understand about our financial situation and how we live our life."

Whoa, there, Ann. When you're being painted as a living embodiment of out-of-touch plutocratic wealth, maybe avoid the construction "you people." Even if you just mean it to refer to "the press," which it seems like you probably did.

People have some theories about what is so bad in Romney's tax returns. Some people think he might not have paid any taxes at all one year, which Romney's campaign denies. (But how do we know?) Matt Yglesias, who points out that the guy already ran for president once so you'd think he'd have cleaned his tax situation up a bit, says maybe there's something in the very recent past that Mitt doesn't want exposed (like his disclosing his secret Swiss bank account to the IRS to avoid criminal prosecution in 2009?).

There are a bunch of other reasons, too, and all of them can be summarized as "he won't release them because they will confirm what we already basically know about Romney's wealth and business practices."

But Ben Domenech and Erick Erickson have a different idea of exactly what Romney's hiding. A brilliant, counterintuitive idea. This is for real their actual theory:

Ben Domenech has been doing some pretty solid reporting in The Transom (you’ve subscribed, haven’t you?) about what might be in Mitt Romney’s taxes. He offers this morning the best and most informed theory.

Why most informed? Well, he talked to people who were familiar with the veep vetting process for McCain in 2008.

Here’s what he reports:

So what about the years before 2009? We know he turned over more than two decades of returns to the McCain campaign during the veepstakes vetting process. What was in them? "Mitt’s taxes were complex, but clean. He overpaid his taxes..."

That's so simple, I can't believe I didn't think of it before. Mitt Romney doesn't want anyone to know that he... overpaid his taxes. The guy whose effective rate was 14 percent in 2010, the one return he released to the public, definitely paid way more than that in his secret, hidden, earlier returns. He is embarrassed, I guess. He doesn't want his rich financier friends to laugh at him.