The Columbine school massacre, across town from Aurora, shows why new gun control is not likely to follow tragedy 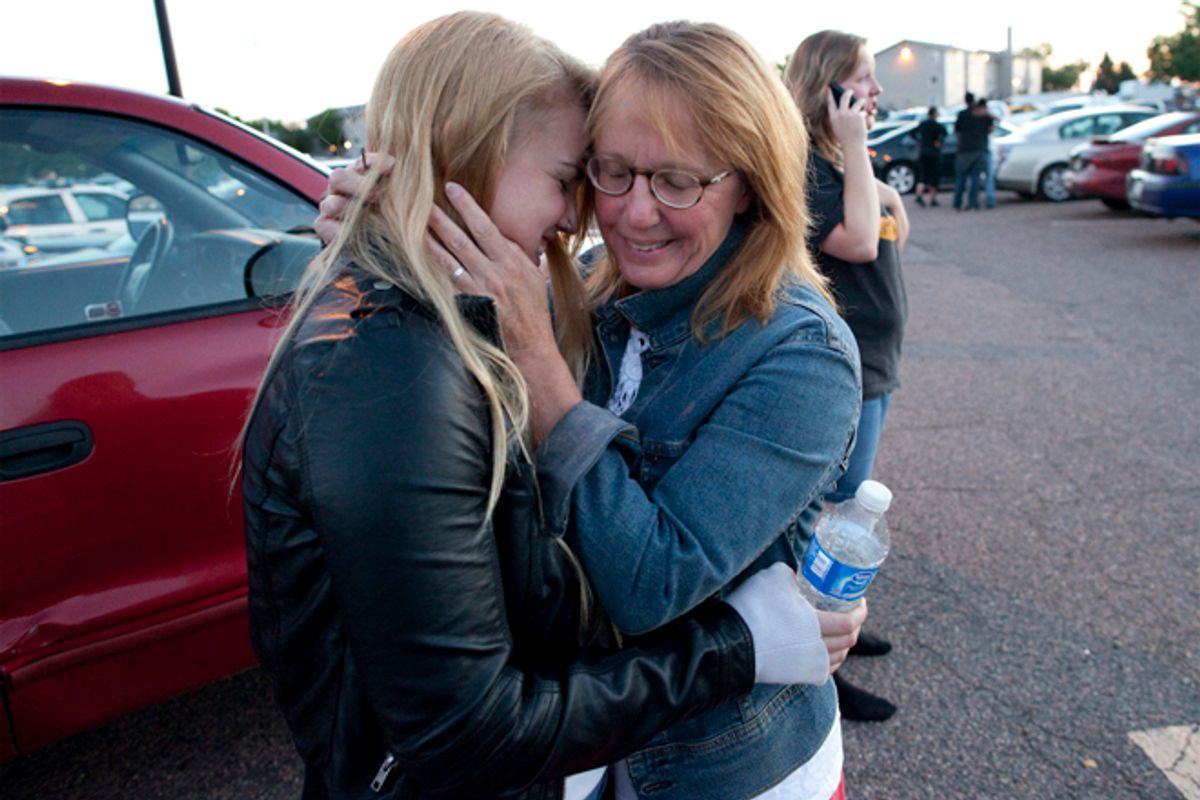 Emma Goos, 19, hugs her mother, Judy Goos, outside Gateway High School where witnesses were brought for questioning Friday, July 20, 2012, in Aurora, Colo. Emma was in the third row of the theater of the new Batman movie when the shooter entered. She helped apply pressure to a man's head who was injured. (AP Photo/Barry Gutierrez) (AP/Barry Gutierrez)
--

Before the sun had even risen in Aurora, Colo., the shooting there last night had reignited the debate over gun control, with New York City Mayor Michael Bloomberg, one of the country’s most outspoken advocates of gun regulations, demanding action. While it may seem a bit crass to turn to politics so soon, it is worth asking how this could happen less than 30 minutes away from Littleton, the Colorado town where the 1999 Columbine high school massacre left a lasting scar on the state and the country for years.

While the emotional damage from Columbine may linger, its policy effects did not. After the school shooting, the state legislature, like many across the country, pushed a flight of bills aimed at making it more difficult for kids to get hold of guns. Lawmakers sought to close the “gun show loophole,” which allows people who buy guns at conventions, instead of brick-and-mortar retailers, to avoid a background check. They also aimed for a law requiring guns to be stored with trigger locks or in safes at home, and tried to increase the age someone could buy a handgun from 18 to 21.

But a year later, almost all of these bills had been shot down thanks to effective lobbying from the NRA and other gun groups. The only laws that passed were token ones the gun lobby supported, like allowing police to arrest people who knowingly purchased guns for criminals. The NRA spent $16,950 in January of 2000 alone fighting gun laws. "[It's a] tremendous amount of money," Pete Maysmith of Colorado Common Cause, a government watchdog group, told CBS News in February of that year. "$16,000 in one month going into the Colorado Legislature -- it's a financial arms race."

More than a decade after Columbine, gun laws across the country are more lax than ever. Opponents of gun control say legislation wouldn’t have prevented the Columbine massacre or any other major shooting, which may be true to varying degrees, depending on the shooting. Early reports indicate the suspect in last night’s theater shooting had an AK-47-type weapon, some variants of which were outlawed under the Federal Assault Weapons Ban. That law was signed by President Clinton in 1994 but expired 10 years later and is not likely to be reauthorized.

The Washington Post’s Chris Cillizza, writes today, “If history is any guide, however, the Aurora shootings will do little to change public sentiment regarding gun control, which has been moving away from putting more laws on the books for some time.” Indeed, the experience after the Columbine shooting shows he may be right.