My husband, the criminal

He stole money from clients and nearly bankrupted our family. Could I stand beside the man who destroyed so much? 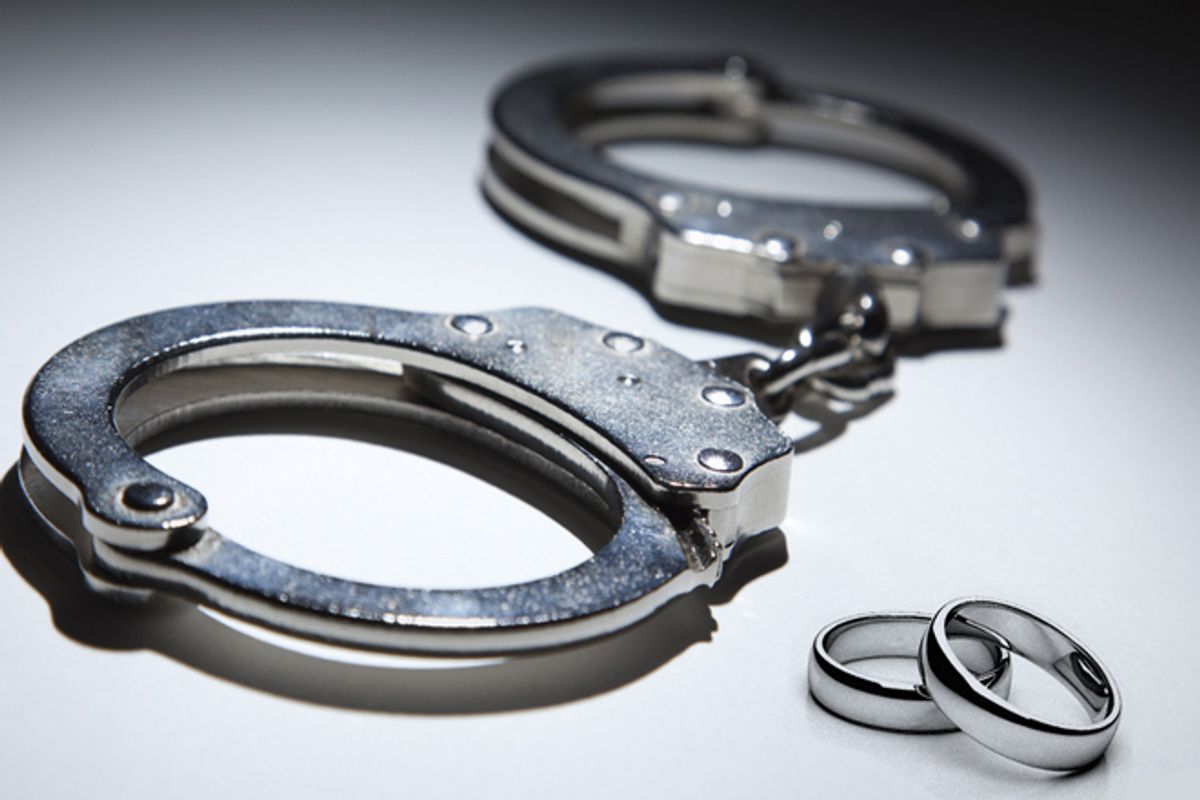 The December day my husband went to state prison, an angry wind whipped the flag at the entrance to the county courthouse. I had considered skipping his sentencing altogether, but instead I walked up the steps, willing myself not to cry.

Joel had been out on bail for a year and we’d been separated for five months, after being forced to sell our home in an affluent Long Island suburb. I showed up that day hoping for closure and some relief from the parrying between love, grief and disbelief.

My husband, soon to be a disbarred lawyer, began serving one to three years for “borrowing” funds from a client’s escrow account, a grand larceny charge I had known nothing about. My two college-age sons and I had been trying for months to find some footing on a crackling ice pond. We’d lost our home and the person we loved. I had no idea how to pay our expenses, my husband’s debt, and the hefty college tuition. The financial and emotional debt my husband had inflicted wasn’t going away with him.

As a 55-year-old editor for a nonprofit, I had no familiarity with such things as Class C felonies, sentencings and incarcerations. I’d grown up in a middle-class Italian-American household in Brooklyn, where the riskiest thing we’d done was scrape metal garbage can covers along the neighbor’s chain-link fence on New Year’s Eve to make a rowdy celebration. We were honest to a fault, embracing my civil servant father’s philosophy: “Assume the best. Give everyone the benefit of the doubt.”

I trusted folks. So believing my husband throughout our marriage of more than 25 years was easy. I never doubted his sincerity and certainly not the depth of his love for our boys and me. In fact, my husband’s goodness nurtured my trust and affection from the start.

Early in our relationship, I traveled to Phoenix; the weather had turned cold on the flight home, and I hunkered down in my thin windbreaker to wait for the shuttle bus at JFK airport. Walking through the terminal, I spied him leaning against a wall with a grin and my wool coat over his arm. I had never felt so taken care of and grateful to have this man in my life. And from there the layers of trust and love nestled upon each other to create a foundation I thought I could dance on.

Maybe I should have seen it as a sign when the cap Joel wore, emblazoned with the word “Truth” on the front, lifted off his skull and floated onto the Long Island Railroad tracks. He’d worn that cap constantly, trying to make some peace, I believe, after witnessing from his office window the collapse of the Twin Towers in 2001. That day, the implosion propelled him under his desk, knuckles clasped around his head like a boy in a 1950s air raid drill, as the tsunami of steel, body parts, papers, and jet fuel rolled over his John Street building.

The bonds of trust bowed when I discovered he’d secretly emptied accounts: his IRA and our son’s college annuity. That was the beginning of 2007 -- two years before the DA’s office began to investigate him -- when I checked in with my financial advisor wondering why we hadn’t received our year-end paper statements.

“Was there some mix-up?” I asked politely, apologizing for taking up his time.

“The accounts are empty.” His tone softened. “I wanted to call you, but I couldn’t do that. I needed you to call me.”

My back stiffened. There’s nothing like hearing “empty” when you expect to hear “full.”

“If I were you,” he instructed, “I’d get myself a good lawyer, accountant and private investigator.”

Confused and angry, I sought out a lawyer, who drew up a separation agreement while my husband followed me around the house chiding me about throwing money away on unnecessary legal representation. We had furious middle-of-the night arguments punctuated with, “I trusted you!”

My trust finally snapped when I excavated our finances and discovered a heap of distress. The homeowners’ insurance had been canceled for nonpayment; he’d been paying our real estate taxes on a credit card and had tallied up hundreds of thousands in debt.

By the time I realized the disaster of our home’s subprime mortgage refinance – which he'd promised would open a spigot of cash -- trust was long gone. The astronomic home loan was negatively amortizing daily. The home I loved, and eventually lost, was perched on the edge of a cliff.

Toward the end of the long string of sad months, my hope, too, was hijacked when my husband revealed what should have been obvious: a long-in-the-making heroin habit he’d revealed after slipping away to detox when I was out of town.

So by the time Joel told me the DA was prosecuting him, trust was a joke. Though that joke was about as funny as a Nixon Halloween mask.

By the time I headed to that courtroom, I’d been consumed by grief for months. But when the anger subsided, I felt compassion for him. And I needed to believe that the man I shared my life with was still there despite the chaos he'd created. Somewhere the loving buffoon who made me laugh by wearing a Beatles wig on his bald pate or who returned a small gift he once found in a taxicab, tracking down the owner doggedly, was still there. The owner had sent a wind chime as a thank-you, and we’d hung it on our front porch, its sound a reminder of my husband’s kindness.

When I emerged from the stairs, I saw Joel sitting at the end of a long, narrow waiting area in a cheap plastic chair cradling his smartphone. As I approached, he stood with his arms spread wide as he used to when we were first married and I’d ask him how much he loved me. Now our eyes were moist. We knew it was going to be a long time — maybe never — before I’d see him again. Even though I’d refused to see him the past few months — saying no to his request for a Thanksgiving Day visit with the boys and me — seeing his joy at my appearance stoked some deep, undeniable love. There it was, springing from a well, even in the face of all the ugliness.

Inside a sign, “In God We Trust,” hung over the judge’s head.

“I tried a case in front of this judge 11 years ago,” Joel whispered. The room was too hot in the way government offices with ancient cast iron radiators can be. The clerk wore a tie with mini Christmas trees.

When they called his number, Joel stepped up to the judge, next to his lawyer and the assistant district attorney, who had earlier turned to me with a gracious nod. Joel apologized to the court, his clients, our sons, his family and me and expressed his willingness to commit to recovery. He viewed his sentence as a new beginning, he said, a time to shed the shame and guilt he’d been carrying for years. The judge invoked the sentence and they escorted him handcuffed, despite his request to walk freely.

The struggles that began before my husband’s incarceration — attempts to wrestle with my own prison of anger, sadness, injustice, compassion and, yes, love — only grew worse for me afterward. Not the outcome I had hoped for. It was as if there were two columns, one for love and another for resentment.

I lay awake at night and tried to reconcile these accounts: In the love column would appear a memory like the time Joel bought a mini painted pumpkin at a crafts fair, handed it to me, and called me “the prettiest pumpkin.” In the resentment column, very long on the page, appeared such items as a $40,000 business line of credit I was saddled with despite my never having spent a dime of it. My own guilt was there too, though family and friends pounced if I mentioned that. But I did feel guilty — for not recognizing the signs of his desperation, for my self-righteous expectation he would take care of me, for my blind trust.

As the months went, I grieved for our life together. The most painful part was balancing loss and love — understanding that our affection, comfort and shared years meant something even if they had ended in such pain. Eventually, I found a modicum of peace.

Over the next year of incarceration, Joel shuttled between New York state and county facilities, one as far away as the border of Canada, where I and the boys visited him, learning the protocol to family visits, which sometimes demanded removing my bra because the clasps disturbed the metal detector or waiting as my younger son submitted to a body scan in a private room. We removed our shoes, jewelry and other possessions before entering the linoleum-floored visiting rooms with the Goya Foods vending machines or taking a family photo before a faux cityscape.

Friends asked why I would visit after all he had done to me. But that was just it. I came to see “it” wasn’t something he had done “to” me or our kids, especially as the façade of Joel’s arrogance melted with the help of 12-step programs. It made all of us more honest. More grateful. More willing. In a way, his incarceration was treatment, for all of us.

Designated an artist-in-residence at Ragdale this summer, Janet Lombardi is working on a memoir.