"We've made monsters of ourselves"

After Aurora, there are too many tweets, too many craven politicians, too much coverage. We need a moment of quiet 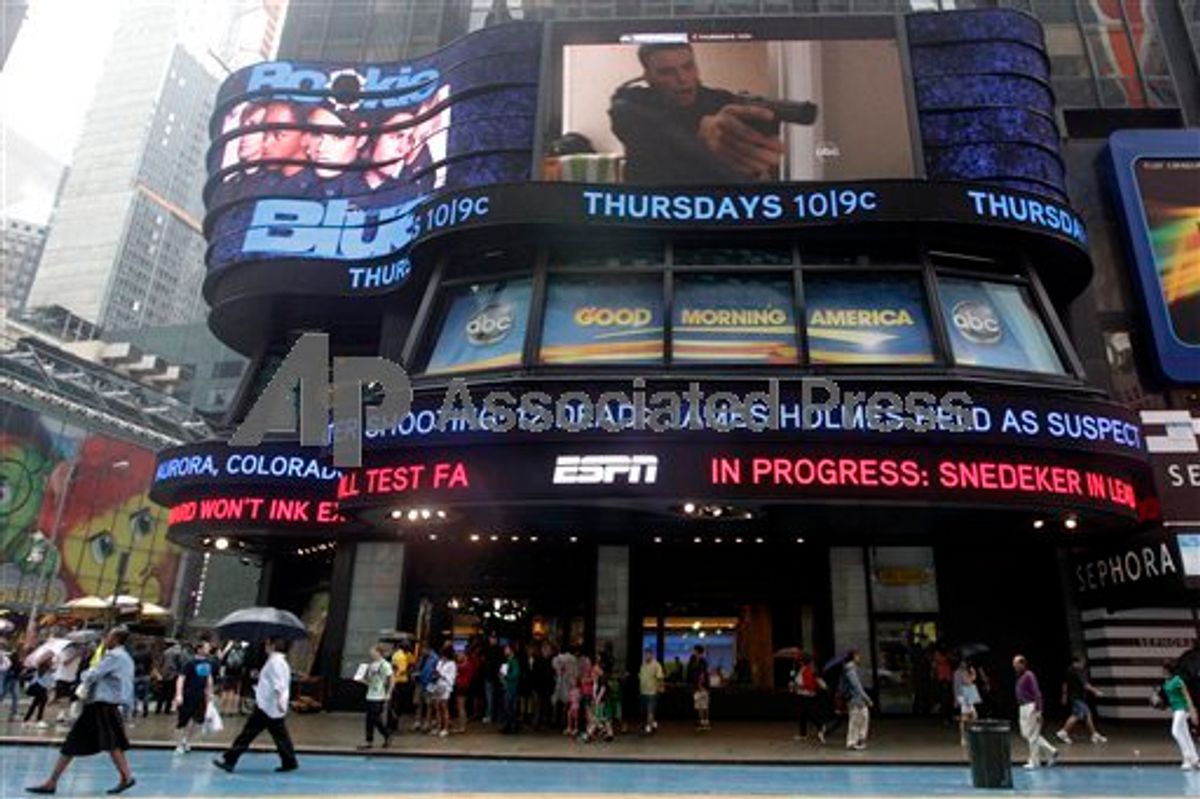 Sometimes it is too easy to know too much about terrible things, and it is even easier to share your opinions about terrible things. We have Twitter and Facebook and our blogs and comment fields at our disposal. We have every opportunity to respond to everything we read, and in times of tragedy, in particular, we turn to these places where we can respond so we can be heard, so we can be seen, so we are not alone in our mourning or our outrage.

I go to the movies all the time. I see everything. I love sitting in the theater, the air reeking of popcorn and sugar. I love the endless reel of trailers and the way the theater darkens before the movie starts. Even when a movie is bad, it is so, so good. Most of us go to the movies with some regularity, and that's why the massacre, for that is what it is, in Aurora, Colo., might resonate with us more than other tragedies. It could have been us, sitting in the darkened theater, waiting for "The Dark Knight" to rise. It could have been us thinking this was some kind of elaborate premiere stunt, when a man threw a smoke bomb into the theater. It could have been us screaming and choking on smoke and trying to breathe through the stench of blood and gunpowder as we realized that this was not a movie, not at all, and that at any moment, a bullet could tear through the tender flesh of our bodies. These kinds of massacres are an uncomfortable reminder that it could always be us, no matter where we are, no matter who we are.

We are vulnerable. We are fragile. We are mortal. These are difficult truths to accept.

All across the Internet, today and in the weeks to come, people will share their opinions about violence and gun control and tragedy. They will share these opinions with the intense froth of righteousness, using the sorrow of others to advance an agenda, however well-intentioned. People will make pithy statements and jokes because humor is one way we cope with the unimaginable. Sometimes, though, it all feels too soon, like it will always be too soon to hear what anyone thinks. Maybe this is one of those times.

James Holmes is 24. That hardly seems old enough to develop the kind of rage, and hatred, and madness to do the terrible things he did. There are 12 dead and 59 injured. The man who hurt these people lives in an apartment that has been booby-trapped to such an extent that it will take days to get into his apartment. He purchased the weapons he used, legally, at Bass Pro Shops and Gander Mountain, two stores I frequented when I dated a hunter, stores where outdoor and hunting gear are so ubiquitous you become numb to it, where people stride in with rifles slung over their shoulders when they need to get them repaired.

This is how easy it is. This is how close we all are to weapons of mass destruction.

I have deeply held opinions about gun control and violence, but do they matter right now? Will my thoughts on the sale of high-powered assault rifles change one single thing if I share them on Facebook or Twitter? Absolutely not. Sharing my opinions right now would simply be more noise in a deafening chorus of impotent noise. Our opinions matter, but they don't. Sometimes, things happen that exist beyond the realm of opinion.

I also know this: There is no stopping madness. When someone wants to do damage, he or she will. If you keep a madman from guns, he will use knives, and if you keep him from knives, he will build bombs. The only thing we can do is make it a little more difficult for the madman to release his madness on innocent people. We can hope that might be enough even though time and again, history has shown that such is not the case.

Perhaps we share our opinions because we hope that somehow, someway, it will lead to a safer world where madmen will be left with nothing but their madness.

That world does not exist.

What's more impotent yet, than sharing our opinions, what is noisier and vastly more infuriating, are the politicians who are tripping over themselves to reaffirm their positions on gun control, who are making statements and gestures, all strategies to somehow further their own ambitions. Alongside them stand the journalists reacting and expounding and rushing to Aurora to be on scene, to provide the most visceral reactions, the most earnest stories, to be there, to be righteous, to be first.

The networks have wall-to-wall coverage planned. They will create an unscalable wall of noise around this tragedy.

How do we respond? What do we say? What words could possibly rise to the occasion of such tragedy?

Unimaginable. Unspeakable. Evil. Massacre. Tragedy. None of these words feel quite right.

It's so exhausting, the way we react in this day and age. There's no room anymore for quiet and calm and thoughtful reflection. There's no room to be alone with grief and anger, even for just a little while. We have made monsters of ourselves.

I long for a moment of quiet.