Aurora: We shouldn't be surprised

It's shocking that shootings like the one in Aurora don't happen more often: They're easy to carry out 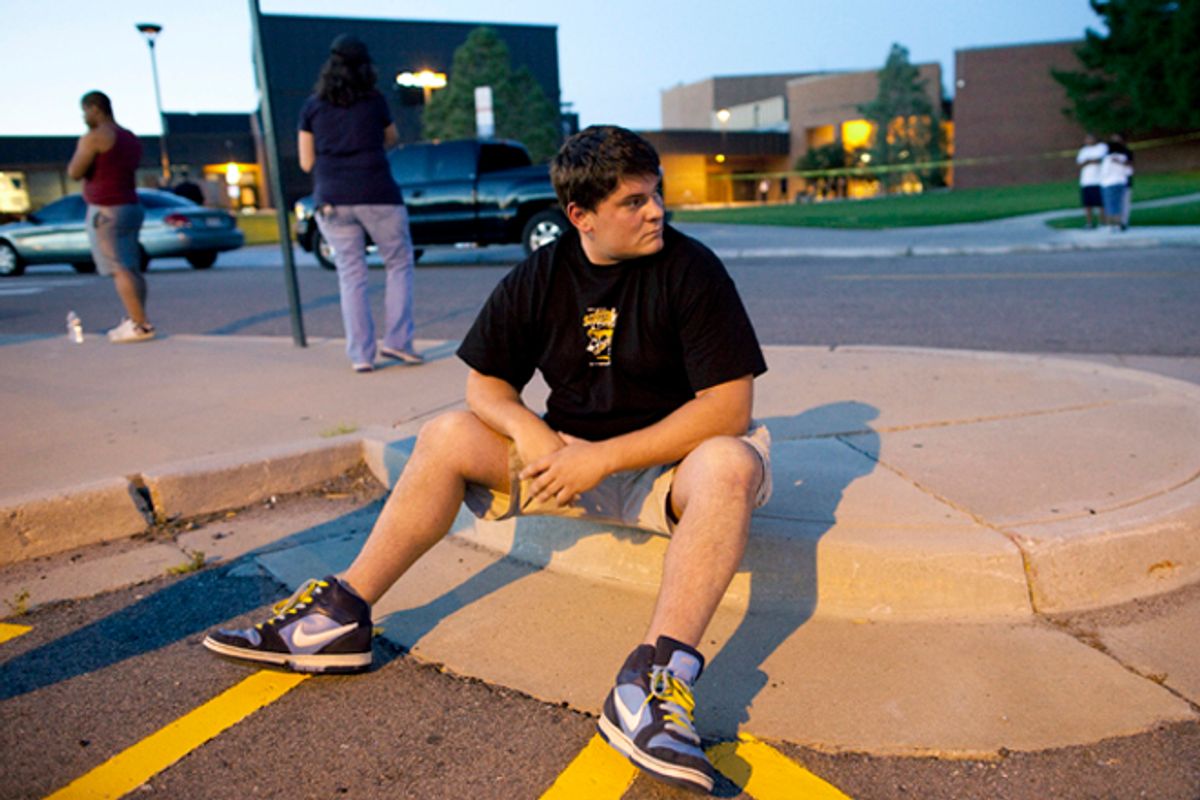 Eyewitness Chandler Brannon, 25, sits outside Gateway High School where witnesses were brought for questioning after a shooting at a movie theater showing the Batman movie "The Dark Knight Rises," Friday, July 20, 2012 in Aurora. A gunman wearing a gas mask set off an unknown gas and fired into the crowded movie theater killing 12 people and injuring at least 50 others, authorities said. (AP Photo/Barry Gutierrez) (AP/Barry Gutierrez)
--

America is a violent country – our homicide rate is four to 12 times higher than that in more civilized parts of the world – and Aurora, Colo., is more violent than the average American town. A down-market suburb of Denver, it sees an average of about 20 of its 325,000 residents murdered each year.

This fact is a matter of almost total indifference to the local – let alone the national – media, since the murders are rarely considered noteworthy by the news business, which is to say the victims are rarely either sufficiently rich or telegenic to garner more than cursory attention.

A lot of people – about 15,000 at present – get murdered in the United States every year. Most of these people get killed in places that, roughly speaking, look something like Aurora: places where the people are poorer and less white than in America in general, and who are therefore by definition not very interesting or important.

Among other things, this kind of crime highlights the absurdity of “security theater” – the almost wholly symbolic rigmarole to which Americans subject ourselves in a few symbolic places, such as airports, government buildings and the like. Anybody in this country who wants to kill a lot of people in a crowded public space can do so fairly easily. The fact this almost never happens – and that when it does happen the act almost never has a political motive – indicates how wildly overstated the threat of terrorism is in America today.

If we faced any kind of real terrorist threat, incidents like the Aurora shooting (except with a political motive) would happen all the time, since, again, there’s nothing that can be done to stop them. That they don’t illustrates the extent to which “terrorism” is a politically useful bogeyman, deployed by the national security state for reasons that have almost nothing to with actual considerations of public safety and everything to do with cultivating a sufficiently fearful and docile populace.

Indeed, leaving aside considerations of terrorism altogether, the surprising thing about the Aurora shooting is that incidents of this type don’t happen more often. We live in a (compared to the rest of the developed world) extraordinarily violent, deeply economically stratified nation, with more than 270 million guns floating around – enough to arm every adult and half the kids in the nation.

A lot of Americans are broke, or angry, or paranoid, or all three, and a lot of these people are heavily armed. It’s not exactly a shock that this combination of factors helps produce 15,000 murders per year.