A new study raises old questions about how to prevent early sexualization of girls. It's mothers, not just media 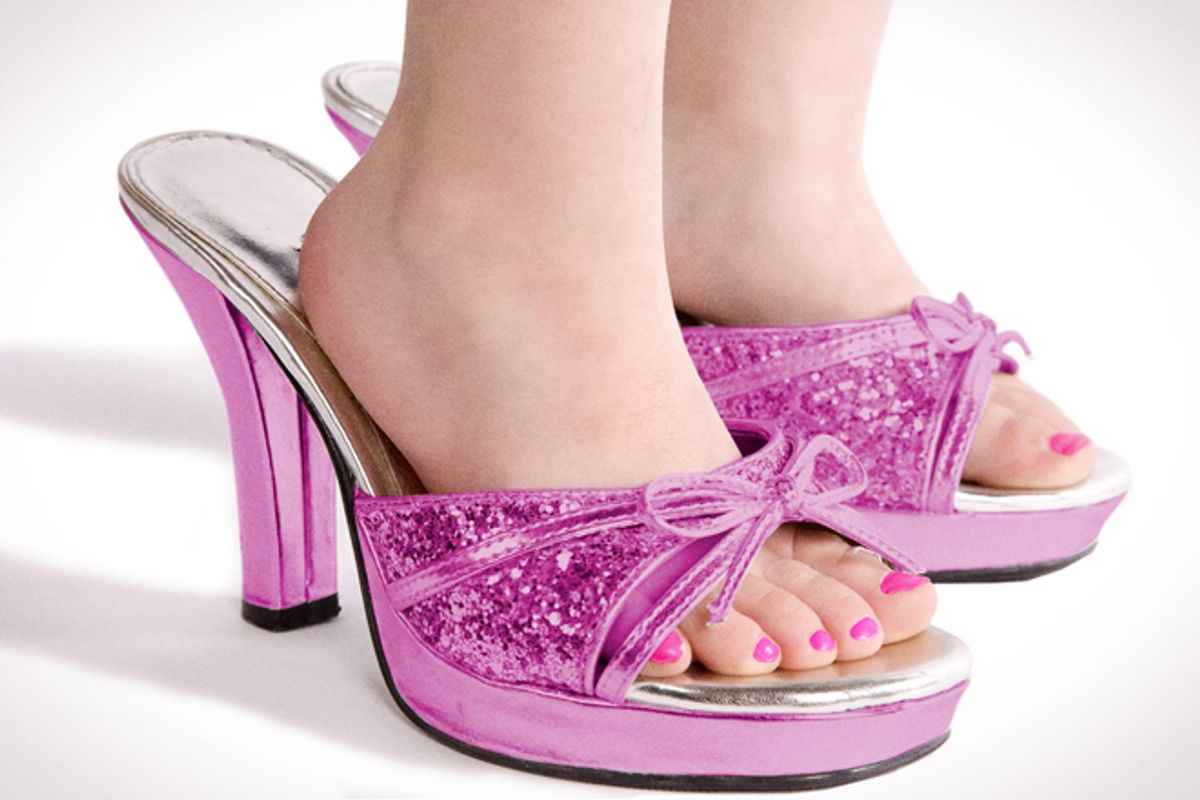 There’s the clichéd image of a little girl putting on her mother’s makeup, mimicking with studied precision the sucked-in cheeks of blush application, the open mouth of mascara-face, the puckering up post-lipstick-application. There’s the oft-repeated scenario of a kindergartner sashaying in oversize heels, placing a hand on either hip as she poses for an imaginary audience.

These are well-worn images in part because they ring so true: Girls learn what it means to be a woman by watching their moms. A new study has not only corroborated that but also found that mothers are a strong predictor -- even more than the amount of media consumption alone -- of whether a girl will regard herself as a sex object. The study sample was too minute to be definitive and has to be followed up with future research, but it raises important questions about how to best prevent young girls from regarding themselves as Bratz dolls.

Researchers had a group of 60 girls between the ages of 6 and 9 choose between two paper dolls that were identical save for their dress: One wore revealing, “sexy” clothing, while the other wore “stylish but non-sexualized clothing.” The researchers found that “girls overwhelmingly chose the sexualized doll over the non-sexualized doll” when asked which one they would like to look like and which one would be popular. Given our sex-saturated culture, this surprised no one. What was surprising was this conclusion: “We do not find media consumption to be the primary culprit for early sexualization of young girls.” The researchers went on to say that “the quantity of TV and movies watched is not, in and of itself, a risk factor for young girls’ sexualized self-views.” Instead, it’s “the interaction between media hours and maternal self-objectification that creates vulnerability for early sexualization.”

That is to say, media-immersed girls with moms who view themselves as sex objects were more likely to pick the sexy paper doll.

In her 2008 book "The Lolita Effect: The Media Sexualization of Young Girls and Five Keys to Fixing It," Gigi Durham bemoaned that “the turn of the new millennium has spawned an intriguing phenomenon: the sexy little girl ... with preternaturally voluptuous curves, and one whose scantily clad body gyrates in music videos, poses provocatively on teen magazine covers, and populates cinema and television screens around the globe.” But the aim of her book wasn’t just to criticize media that sexualizes little girls -- instead, she emphasized the importance of parental influence.

That is in part because of the pervasiveness of media -- specifically sexualized media -- in kids’ lives. “Walking through the mall you’re getting huge posters and billboards, it’s just everywhere. It’s really impossible to escape,” says Durham, a professor at the University of Iowa. “You can’t keep your kids in a bubble. The best approach is to be proactive and teach them to be critical consumers.”

In Durham’s research with middle-school girls “it was very clear that mothers were influential in their lives,” she says. “When I did meet girls who were able to take a critical perspective on the media and thinking of themselves in multidimensional terms rather than just in terms of sexuality, they almost always said it was their mom who sat down with them and had discussions about the media -- either their mothers or some other important adult in their life, but most often moms came up.”

Focusing on moms as the study does is problematic, though, says Sharon Lamb, the author of "Packaging Girlhood: Rescuing Our Daughters From Marketers' Schemes." “It sort of puts mothers as the answers and to blame,” she says. “It’s like, ‘Oh, now mothers feel guilty if you don’t sit down and watch ‘Sesame Street’ and do the dishes instead!”

Like Durham, Lamb emphasizes the influence of parents in general. “We’ve known for a very long time that with eating-disordered girls and teenagers, the more their family has talked about looks and weight and appearance, the more that contributes to [disordered eating].” Just watching and discussing TV with their parents can lead to adolescent girls’ increased self-esteem and body image.

Lamb says the message of her book is that “the parents need to get in there and provide a counter-discourse.” She explains, “You can’t turn off media; it’s all around them in every way, but it’s nice to know that your relationship makes a difference.” None of which is to negate efforts to change the media: It shouldn’t be one or the other but both, Lamb argues.

This isn’t just feel-good advice: Plenty of research has demonstrated that consuming media with your kids -- or “co-viewing,” as the research papers call it -- is crucial. “We know that it’s not just the adolescents who watch more TV who choose to self-sexualize -- it’s the adolescents who identify with the pop stars or characters in whatever media they’re watching that are more at risk,” she says. “So what parents can do with their co-viewing is to critique so that it interferes with that identifying with the characters.”

As the report from the American Psychological Association's Task Force on the Sexualization of Girls, which Lamb coauthored, points out, research has shown that adults outside the family can have a similar influence simply by providing a counter-narrative -- for example, while kids watch a TV clip showing stereotypical gender roles, an experimenter makes a remark contradicting the stereotypes and the kids are more likely to express “greater acceptance of nontraditional gender roles.”

These discussions are not only effective but “actually necessary at this point,” says Durham. “Otherwise, children are just going to be absorbing these messages without any counter-messages or countervailing information, where parents might be pointing out the profit motives of the media and the ways in which sexuality especially is constructed in order to support those profit motives.”

Of course the catch is that parents are as subject to similar cultural influences as their kids. As Dunham says, “Sexuality in American culture today is an impossible regressive standard, and it doesn’t understand sex as part of a holistic concept of personhood.” Freeing adults from that regressive standard may ultimately free kids, too.