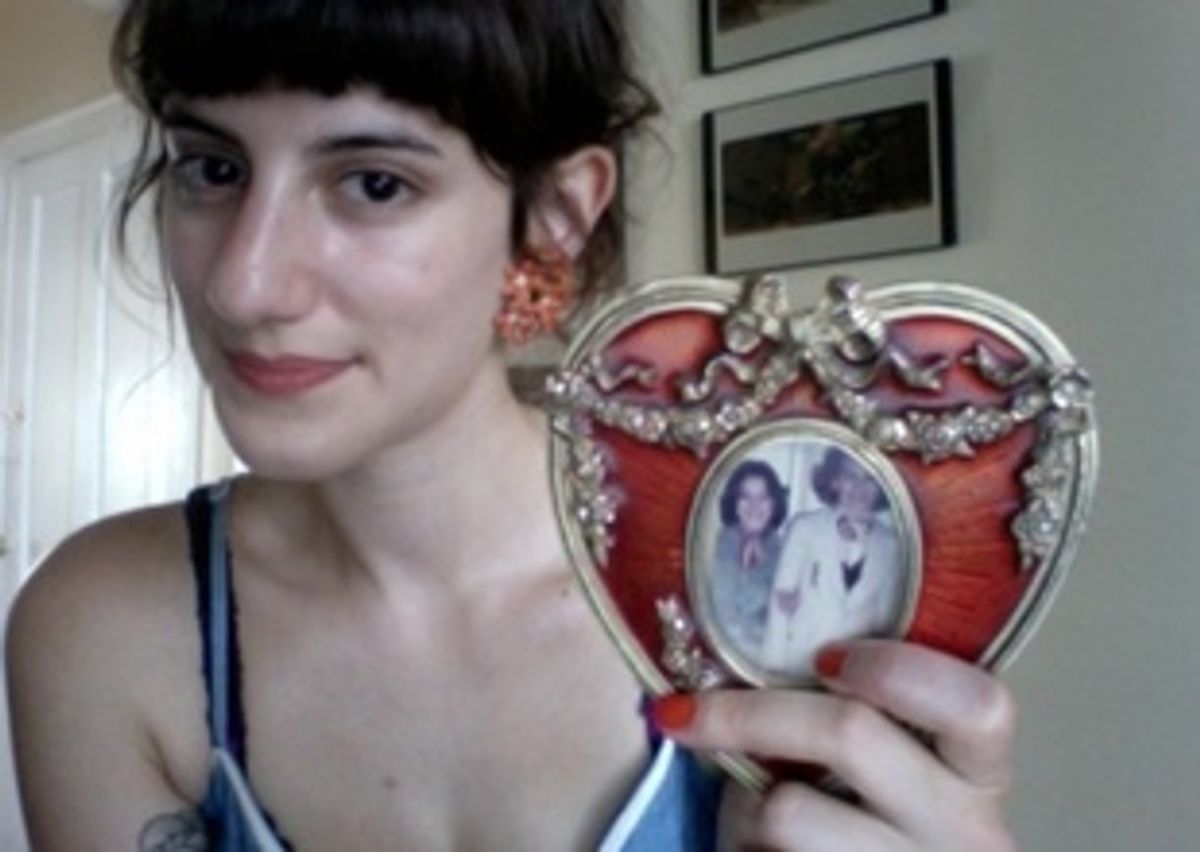 This article originally appeared on AlterNet and xoJane

My grandmother, Flossie, died from anorexia in her 70s, but it wasn’t until I got to college that I realized how many little things are ingrained in me from this experience of loving someone so much who did not love herself.  I’ve never actually had an eating disorder, but I operate in one of two extremes, either always eating healthily -- all. the. time. -- or eating whatever I want under the guise of not wanting to be like the suffering women in my family, all the while hating myself for it.

Flossie decided she would quit eating altogether early in the summer before my junior year of college. What followed was a violent process for something that occurred almost entirely in her bed and at a snail’s pace. She starved to death a few days before my 21st birthday at the end of September.

My grandpa, Hesh, was a wreck and worked furiously to undo what had been a lifetime in the making. Her sister once told my mom, Ellie, on one of their epic phone conversations that Flossie was anorexic since age 13. I highly doubt Janet used the word "anorexic," as it wasn’t plainly stated, even in my house with my psychiatrist father, until long after I’d figured it out. By then it was an irreversible fact of all of our lives.

This is not to say that no one had acknowledged Flossie’s slow death; my dad reminded her in moments of crisis in his frank way that this would kill her and that she needed help. This would result in silent periods between the two of them and not much else. Doctors over the years insisted she drink Ensure and Gatorade, but those things never stuck because she knew the consequences. Flossie had been fixing to starve herself for many, many years, like an athlete in training, and the time had come.

I suppose the ending was fitting, but that doesn’t mean I understand it, or that I can stop thinking about it, and writing about it. It defines me and contributes to the way I see myself more than any other part of my history. I am a woman from Philadelphia; I am Jewish but do not believe in God; I have a great deal of experience with other people’s eating disorders.

Flossie and Hesh helped raise me from their house two doors down. There were portion-controlled snacks and Flossie as fridge keeper. Also poker nights and mock trials, and Melba toasts, and a general celebration of most everything about me. It wasn’t all about the food and neither was Flossie.

Her entire life should dispel the notion that eating disorders only befall the very young and impressionable. She didn’t care what anybody thought of her, but eating and any scenario that glorified doing so was totally repulsive to her. I have never met someone more openly disgusted by the very fact of other people’s eating, nor have I encountered a person willing to express her disdain for fat and overweight people without abandon like Flossie did.

And despite all that, a good deal of my weekends as a kid took place in the food court at the Cherry Hill Mall watching her dissect mall sushi with a knife and fork. It would take this woman 45 minutes to eat the contents of a sushi roll and the seaweed, meticulously avoiding the rice, all the while keeping watch on how much I was eating of that Cinnabon, or Chick-fil-A chicken salad on saltines (mmmmm).

My grandmother was not a happy person. I think it is safe to say, though, that individual moments conjured in her something akin to happiness, short-lived as they were. I think she felt happy being my play partner when I was little — my dolls are still eerily displayed on glass shelves in my room there — or when she watched me speak at my high school graduation. She did smile then. But "jovial" and "lighthearted" do not describe my grandmother. Flossie usually wore all black, often referred to herself as a fat pig, frequently discussed doomsday, and actually choked on the few occasions I ever saw her laugh. Her laughter became a phlegmy cough, her body rejecting it. She was atypical, and I really wouldn’t have preferred it any other way. Her life made her tough.

She grew up poor with a father who had affairs frequently and squandered what little money they earned on other women. Her mother was paranoid and severely depressed and tried to kill herself by walking in front of a bus. She succeeded finally by ingesting a bottle of heart medication later in her life. That was Pauline. But like Flossie, she wasn’t simply the sum total of her crippling disease. She divorced her husband at a time when doing so was more than frowned upon. She became a property owner and landlord and supported her daughters by herself. They both went to college, too, although neither graduated. She was also appearance obsessed.

I very clearly recall standing next to Flossie in Woolworth’s, where she was helping me pick out a dress-up lipstick and listening to a story about strangers mistaking them for sisters. I could tell even then that it mattered, and that Pauline did not correct anyone.

Flossie suffered for Pauline in other ways, too. She was married before Hesh, to a guy she’d fallen in love with during college. By the time they met, she’d taken diction lessons to lose her Philadelphia accent and learned to ride horseback. Their families met for the first time at the wedding, and shortly thereafter, his parents demanded he divorce her because her family was uncouth white trash. Flossie paid the down payment on her first house with Hesh with the settlement from the divorce.

My mom, Ellie, remembers that at mealtimes in that duplex Flossie often “drowned” her food in water. Anything she thought she’d be tempted to eat was subject to drowning to render it un-delicious. It’s amazing to imagine that Flossie would have been tempted by any food, as by the time I came into the picture, it all seemed to sicken her. But that, I supposed, was a result of serious training.

Ellie remembers Flossie peeling the tops off sweet rolls at Stouffer’s — back when the company had a physical restaurant — only to drown the rest.

As a little girl Ellie let me eat whatever the hell I wanted, without imparting any kind of food guilt onto me. On the way to elementary school we stopped in a bakery no more than four blocks from school, and in the space of those blocks I’d manage to gut an entire challah bread, ball up the dough, pinching and squishing, and eat it like an apple. I generally left the crust carcass in the back seat and ate it on the way home.

I remember once while on vacation with my parents that my dad suggested, innocently and accurately, that I might get sick if I was to finish the entire box of cookies I was already halfway through. Ellie was displeased. I don’t think I got sick on that particular occasion, but do recall vomiting a number of times at a friend’s house after stuffing myself with enough birthday cake to kill a small horse. That wasn’t uncommon; my relationship to eating was a free-for-all. Despite her own memories of being banished from the kitchen and watching her mother shove perfectly good food under running water, she protected me.

It’s impossible, though, to hide oneself from one’s kids.

She has her own slew of food issues related not only to Flossie’s attitude about food, but also the various ways Flossie managed to pathologize Ellie’s appearance from a very young age. When she was 8, Flossie dragged her to the doctor to ascertain whether she was a little person, despite no doctor ever having mentioned such a possibility in the past.  At around the same time she forced her to get some stray eyebrow hairs painfully removed by electrolysis.

Ellie remembers herself as being fragile and strange. She can enjoy food, but in general it’s a source of sickness and not to be trusted. She hardly eats when we’re at new restaurants or when she’s in unfamiliar settings, because she is wary at all times that something might disagree with her. The collection of blacklisted items is always accruing. Attending meals with other people’s families I saw adult women bite head-on into sandwiches, rejecting neither bread nor potato chips, without requesting that anything be omitted or brought on the side. I saw women eating lunches comparable to those eaten by their male counterparts, and was shocked. And shocked to be shocked, because I had learned that at a certain point all mothers stop eating, and that they very seldom eat lunch.

What I want from my life changes every day, as I’m sure is true for most 23-year-olds. I do know that I want to watch this legacy of food pain recede into my distant past. I want my daughters, should I have any, to eat when they’re hungry and for fun without allowing it to run their lives. Basically I think the women in my family are getting better and better by small increments in each generation. I eat well and healthily and have never had trouble maintaining a healthy weight — I have never tipped the scales toward being either over- or underweight — and yet I constantly think about food whether I am craving something particular and exciting, or recounting the things I ate that day and assessing my failure or my success.

Ours is a life of all-consuming obsession, and it’s my job, being the next in line to have babies and keep things going, to perpetuate a tradition of women who talk to one another on the phone on a daily basis, and write letters, and become stronger for this community. I can’t really imagine myself without it, without having had the opportunity to know Flossie and ultimately see what self-destruction is in the most basic of senses. To refuse your body’s call for food, to refuse even when it is thrust before your immobile body day after day by the person who loves you most, and to say no every time. The slow deliberate nature was a kind of explosion by tiny increments every day because it means she had no qualms at all about death, not even momentarily. Missing Flossie is as painful as I’m sure living was for her.

Claire Glass is the literary editor at GapersBlock.com, works for Story Studio Chicago, and freelances around town. You can follow her on twitter @MsClerval.