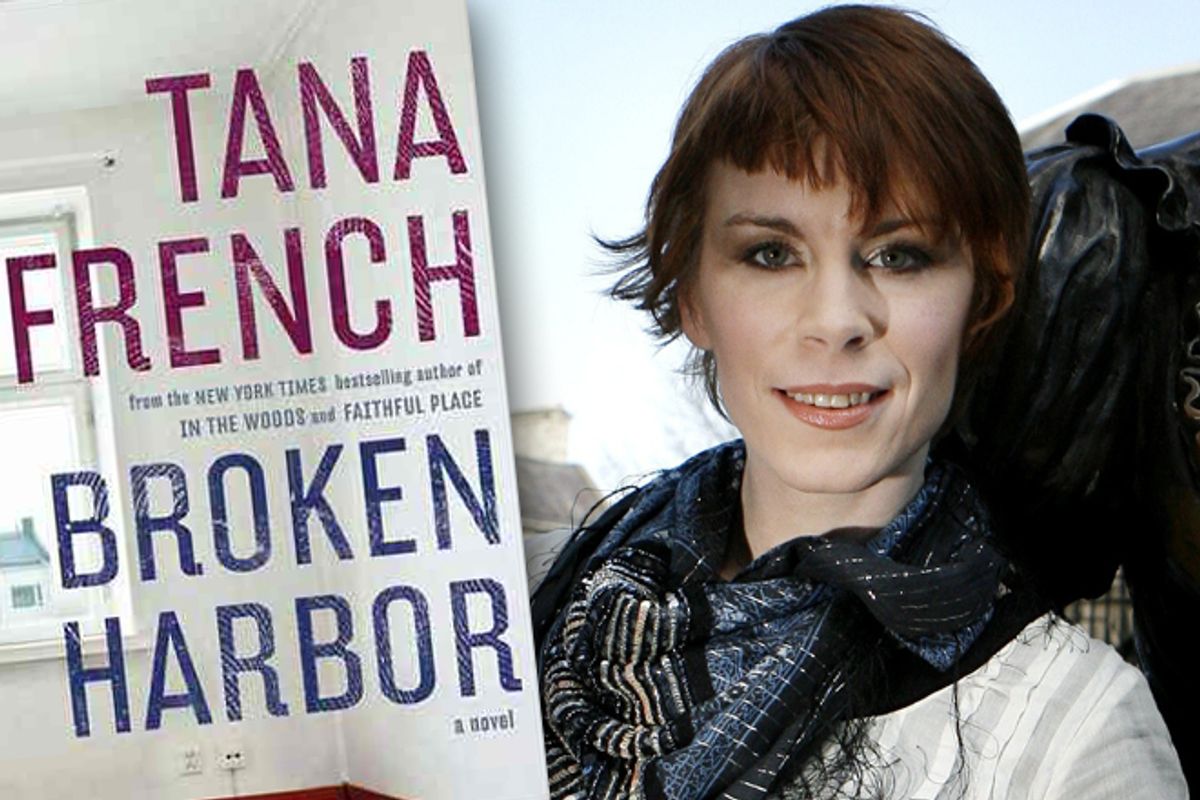 The very first detective story, Edgar Allan Poe's "The Murders in the Rue Morgue," was a locked-room mystery: Poe's sleuth was presented with a crime committed in a space seemingly impossible for the perpetrator to enter or exit. The fourth book in Tana French's brilliant, genre-busting series about the (fictitious) Dublin Murder Squad, "Broken Harbor," looks, at first glance, like a similar puzzle. A family of four has been attacked in their locked-and-alarmed suburban home. Only one member, the mother, survives, and she's unconscious, hovering near death. Everyone agrees that Jennifer and Pat Spain had a golden marriage, the union of childhood sweethearts who have never glanced twice at anyone else and who are blessed with an adorable son and daughter. So who smothered the kids in their beds and stabbed the parents? How did he get in, and out again? Be advised: In French's novels, there's no such thing as a locked door, only the illusion thereof. All boundaries are permeable.

Each book in the Dublin Murder Squad series is narrated by a different detective, and in each novel the case at hand is one that changes that detective's life forever. (This is much more satisfying than a series that focuses on a single detective who is often subject to a chain of ludicrously soapy personal crises.) A minor or supporting character in one French novel becomes the protagonist of the next. Mick "Scorcher" Kennedy, the rule-loving martinet who plagued the maverick narrator of 2010's "Faithful Place," is the guy who picks up the case in "Broken Harbor."

"If you're good at this job, and I am," Mick opines, "then every step in a murder case moves you in one direction: towards order. We get thrown shards of senseless wreckage, and we piece them together until we can lift the picture out of the darkness and hold it up to the white light of day, solid, complete, clear." That's also what detective stories do, although French's are known for refusing to tie absolutely everything up with a tidy bow. (If you're dependent on the narrative hand-holding provided by most pop culture storytellers these days, this is frustrating; if you're sick and tired of having every last freaking thing spelled out, explained and underlined for you in neon, it's thrilling.)

The obvious suspect in this crime is Pat Spain, but not everything adds up. Where is the murder weapon? Why was Pat's computer wiped clean? Why are there holes in the walls of the otherwise neat-as-a-pin house, and why have video baby monitors been pointed at them? Why is there an animal trap set up in the attic, with a leghold so big it "looks like it could take down a puma"?

This is one creepy crime scene, made even creepier by the larger setting, a seaside housing development 45 minutes outside Dublin. Begun during the economic boom, it was abandoned by its builders before it was finished. There are no shops, no pubs -- there aren't even any streetlights. Many of the weed-swamped houses are uncompleted, and most of the rest are unoccupied. Even the inhabited ones are starting to fall apart. This is one of Ireland's "ghost estates," thrown up quickly during the heyday of the Celtic Tiger. It's another kind of trap; families like the Spains thought they were getting a leg up on the "property ladder," and now they're stuck in houses that are worth less than what they paid for them.

Yet, the place isn't truly deserted; the chaos Mick fanatically girds himself against has begun to seep in, in the form of nature reclaiming the site. Mick has no fondness for nature. "Murder is nature," he says. "People maiming each other, raping each other, killing each other, doing all the stuff that animals do: that's nature in action." When he and his new partner, a rookie named Richie Curren, settle in one night with thermal goggles for a stake-out, they witness "a fox, luminous and poised in the road, head up, something small drooping from its mouth; another time ... a sinuous streak of light whipping away through the gardens, between bricks and weeds." Invoking atmosphere is one of French's particular gifts, and in this department, "Broken Harbor" (the name of the town before the developers got hold of it) is a tour de force.

Richie serves as the sometimes skeptical audience for Scorcher's disquisitions on the detective's art. "You would be amazed at how seldom murder has to break into people's lives," Mick tells the kid. "Ninety-nine times out of a hundred, it gets there because they open the door and invite it in." Soon, however, he finds cause to believe that the Spains might be that rarest and most fabulous of creatures: entirely innocent victims. Then he becomes perilously attached to that version of the story.

Mick's devotion to order, rules and procedure, to doing "what the first men did" by resolving to "draw a line across the cave door and say: Wild stays out," suggests there's a significant generator of disorder in his life, and that is indeed the case. Ever since a tragedy in their childhood, his younger sister, Dina, is as "crazy as a bag of cats." She likes to wander in and out of his life, trailing trouble behind her. This, it must be said, is the weakest element of the novel; Dina's madness seems too metaphoric. It takes the form of thinking the shower curtain is ticking like a clock and seeing a face at the bottom of a hole she dug in the sand as a child. That's a fabulously disturbing image out of some nightmarish Terry Gilliam film, but not much like an actual mental illness.

There's often a gleaming thread of the uncanny running through French's detective fiction: a mysterious incident in a primeval forest, an implausibly perfect resemblance between a detective and a murder victim. It had effectively vanished by "Faithful Place," a stringently naturalistic exploration of class and identity in Dublin. "Broken Harbor" lands somewhere between "In the Woods" and "Faithful Place," just as the suburban development the Spains bought into straddles the country and the town. But the wild is constantly working its fingers and claws into the cracks, and even the most vigilant of crusaders for order cannot keep it out for long.