What's most surprising about Republican distortions is how easily they're disproved 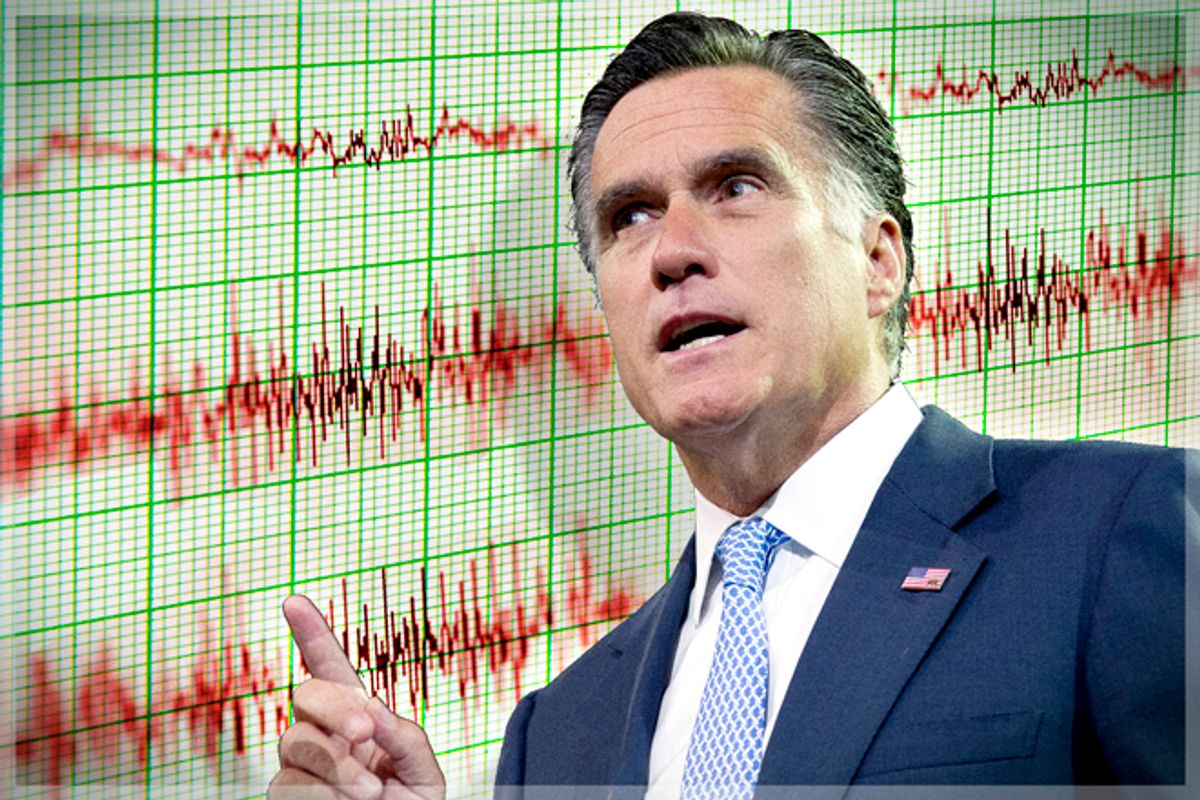 Throughout the election cycle, liberals have been shocked at just how “shameless,” as Kevin Drum put it this week, Mitt Romney’s campaign has been. It’s not just that Romney lies; it’s the quality of the lies, the indifference to any fact-checking, the insistence on continuing to use a lie long after it’s been definitively debunked.

I have a name for it, and an explanation. Call it lazy mendacity.

First, some examples are in order. Perhaps the most famous one is the Republican insistence that Barack Obama rejected the idea of “American exceptionalism” in a press conference – an interpretation that depended on yanking a quotation out of context. Bad enough to do it, but years later it’s not at all unusual to come across examples of Republicans still trotting out this one.

The out-of-context quote is a fruitful source of lazy mendacity, as can be seen in the latest campaign flap: Mitt Romney’s eagerness to use a snippet of a Barack Obama speech last week against him. No, Obama didn’t mean to say that people who build businesses didn’t actually build them (in context, as Dave Weigel makes totally clear, “didn’t build that” is about roads and bridges). But it gets worse: A few days into the story, Republicans then produced a video to support their version of the quote by selectively clipping out the context. Just think about that: They couldn’t possibly have thought that no one would notice, given that lots of people had already been pointing out the selective quote. And yet they did it anyway.

Want another? The example I came across that started me on really thinking about this was an op-ed on the Affordable Care Act by Wisconsin Gov. Scott Walker. Walker cherry-picked a handful of facts from a legitimate independent analysis of the effects of the ACA on Wisconsin – an analysis that he helpfully linked to in his op-ed, so that anyone who looked at it could easily see his obvious omissions. A typical example: Walker wrote that “for those who are covered by the small-employer group market, the average premium increase will be 15 percent.” But in fact, the study says that 53 percent in that market will have a 15 percent increase, while the other 47 percent will average a 16 percent decrease. In the report, the 16 percent decrease was literally in the next sentence; it would be hard to extract the “bad” part of it without tripping over the “good” part, and obviously anyone who wanted to see whether Walker got it right was going to see that.

Just to be clear: It’s obviously possible to make a case (convincing or not) that Barack Obama’s vision of the United States is different from a Republican vision; that Obama has done too little for business; or that the ACA will hurt Wisconsin. It’s also certainly possible, although I suppose not particularly admirable, to construct careful lies that are not easily disproved. What we’re seeing from Republicans, including the Romney campaign, is something different. Not just mendacity, but lazy mendacity.

So why are we seeing so much of it?

My guess is that it has to do with the growth of the partisan press, and especially the role of the Republican-aligned media – Fox News and conservative blogs and talk radio.

Republican-aligned media encourage lazy mendacity in two ways. First of all, there’s just a lot of space to fill: Talk show hosts need things to talk about! So there’s a major incentive for Republican politicians and pundits to come up with those things, the more the better.

And, perhaps – and this is just as speculative as the point above – consumers in the conservative marketplace aren’t nearly as picky about the truth as Democrats are. For one thing, as (my brother) David S. Bernstein has argued, it’s really a marketplace – so to a large extent we’re comparing conservative shoppers with Democratic ones. Yes, I know a lot of liberals think that conservatives are all knee-jerk idiots who salivate at whatever raw meat Rush Limbaugh throws at them, but I’m very hesitant to assert that without strong evidence. What I can credit, however, are structural differences, and this is certainly one.

So: The result of all of this is that there’s a large market for outrages on the Republican side, and one that doesn’t look very closely at whether the outrages are really all that outrageous. Give people incentives, and they’ll respond. The outcome is lazy mendacity.