Private student loan lenders cashed in by offloading risk to the next sucker down the line. Sound familiar? 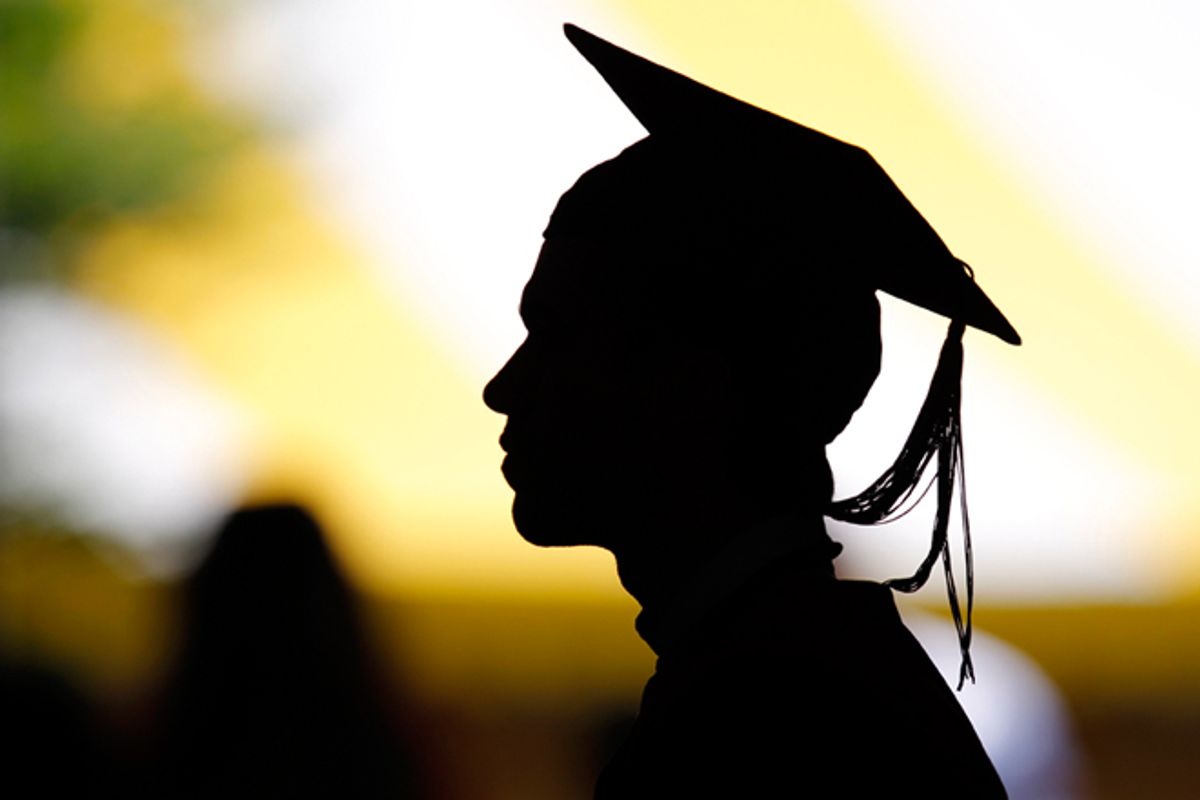 For any student struggling to pay for college, government-backed student loans are a much better deal than private student loans. Interest rates are usually lower and repayment options are much more flexible for government loans. The federal student loan program, for example, allows a six-month grace period after graduation before requiring repayment, and offers ways to soften the blow for graduates fighting their way through a tough job market by capping repayment as a percentage of income. Not so for private student loans. Borrowers have to start paying immediately after graduation and there are very few options for smoothing out payments over time according to how much a graduate ends up earning.

Which leads us to the first distressing tidbit revealed in the Consumer Financial Protection Bureau's new report on the private student loan market: Starting in the mid-2000s, students increasingly began turning to private loans before they had exhausted all the federal loans available to them.

Why would students be so imprudent? The answer to that question tells us yet again why Wall Street and the private sector can't be trusted to behave responsibly.

In broad strokes, the story of the growth of the private student loan market (from $5 billion in 2001 to $20 billion in 2008) offers an illuminating parallel to the surge in subprime mortgage loans during the same period. Banks figured out they could bundle up student loans into securities and sell them for a profit to other investors. $100 in student loans could be turned into $105 through securitization. And since the original lenders weren't holding on to the loans, they weren't at risk if students defaulted.

The incentive to ramp up loans to riskier and riskier borrowers was irresistible. In the past, universities had provided a useful filter operation, alerting students to the availability of private loans when they had exhausted all other options. But the same period in which we see such a dramatic rise in private student loaning is also marked by a sharp rise in "direct-to-consumer" lending. Quite often, these students did not realize that the private loans represented a much worse deal than the terms offered by the government. The circumstances were most outrageous at for-profit colleges, many of whom had financial relationships with private lenders. According to the CFPB report, "in 2008, 42 percent of undergraduates at for-profit colleges took out a private student loan, while only 14 percent of all undergraduates used a private student loan."

After the financial crash, the market for student-loan-backed securities collapsed, as did the overall size of the private student loan market. But the damage was done -- a generation of students hit the worst job market in generations saddled with loans that can't be discharged in bankruptcy and include little room for flexible repayment.

The key takeaway: The private sector engineered this debacle all on its own. Financial institutions boosted subprime student loans because they'd figured out a way to profit from high-risk lending, and not because of any government mandate to help low-income students pay for college.

So the next time you hear someone arguing that the rise in subprime mortgage loans was a market response to government efforts to boost homeownership in low-income communities, remember the student loan example. The key malefactors in both subprime mortgages and subprime student loans were private lenders who'd figured a way to offload risk to the next sucker down the line.

And while you are mulling that over, consider the following line from the CFPB report summarizing the prevailing sentiment in over 2,000 comments received by the bureau from borrowers of private student loans.

Respondents expressed a mix of confusion, regret, and despondence about their current circumstances.

Wall Street in action! Mitt Romney, by the way, wants to increase private sector involvement in the student loan market.