George W. Bush gutted our nation's gun laws, and Democrats are too scared to change them 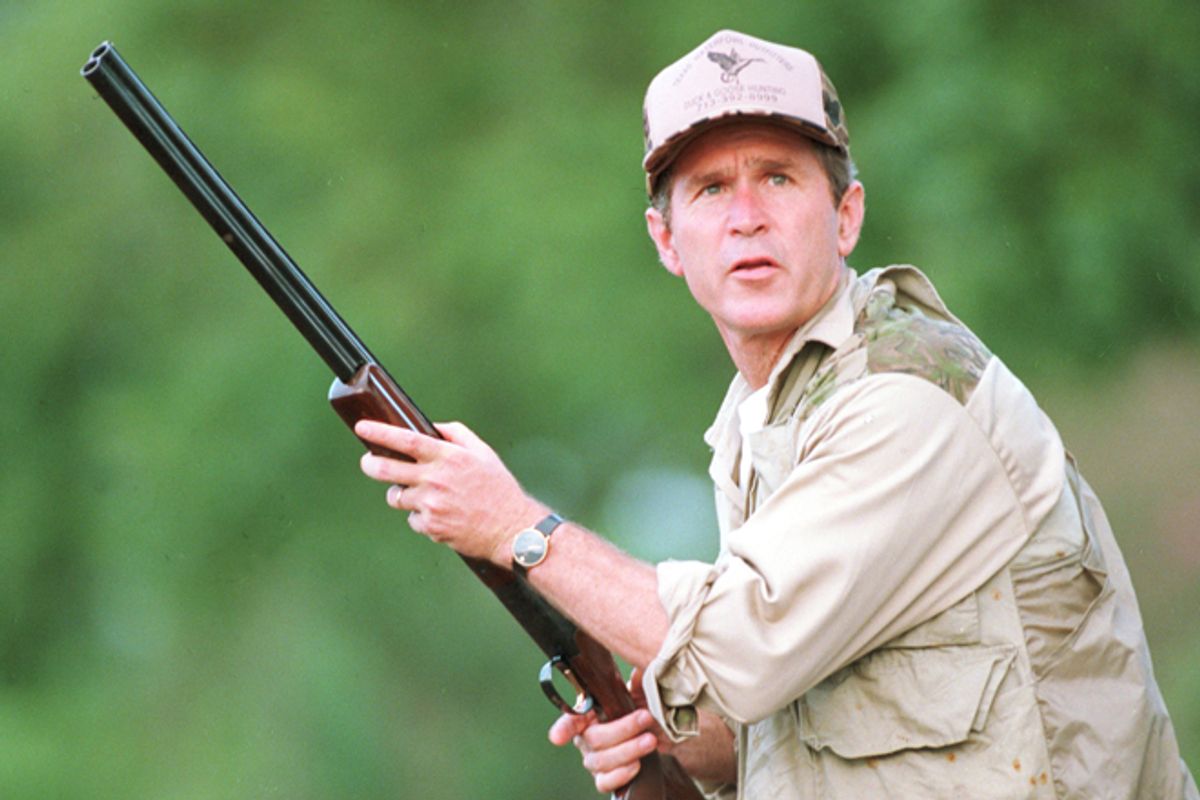 From coal mines to the space shuttle, disasters prompt predictable, if belated inquiries about safety and the law. But while that was once true in the world of gun violence, it’s not anymore. The aftermath of the latest terrible shooting at a movie theater in Aurora, Colo., brought an outpouring of sympathy, condolences and resolve. But the 12 killed and 58 wounded at the hands of a possibly deranged man with four guns will bring no national self-examination of American gun laws. This is one issue where gun violence has been all but divorced from gun policy.

1. Democrats become gun shy. In the aftermath of the 2000 elections, many Democrats believed that presidential nominee Al Gore’s narrow loss was owed in part to his support for stronger gun laws. Whether true or not, Democrats decided that sustained gun control advocacy was more trouble than it was worth, and proceeded to rebuild their party by broadening its tent to include Blue Dog Democrats, some of whom supported expanded gun rights. The strategy was key to Democratic victories in 2006, and it advanced policy goals in many areas, from the economy to healthcare. While some in both parties continued to support stronger gun laws, the Democrats backpedaled on guns, quieting the voices of control advocates in the national debate.

2. The Bush Gun Boon. The second Bush presidency was, in policy terms, the most gun friendly in American history. In the 2000s, the gun lobby pretty much ran the table. Not only did the National Rifle Association realize its highest priority – enactment of a law to provide unprecedented legal protection for the gun industry – but it saw the eclipse of the assault weapons ban, new and sweeping restrictions on gun tracking data, and the Supreme Court’s embrace of the NRA’s view of the Second Amendment (see below). Thanks to the Bush administration, people on terrorist watch lists cannot board airplanes, but they can still buy guns – as captured al-Qaida instruction manuals carefully pointed out. When governmental leaders marched away from even minimal controls, so did some of the country.

3. The Supremes’ Good Housekeeping Seal. Public opinion often follows, rather than leads, government decisions and actions. Just as the Supreme Court’s recent decision upholding the constitutionality of the Affordable Care Act will help spur greater public support for Obama’s controversial healthcare legislation, the high court’s 2008 ruling carving out a new, individual right to gun ownership also added a kind of legitimacy to “gun rights” that it did not formerly have. Even though much, if not most of what people claim as gun rights have nothing to do with what the Supreme Court actually ruled, for the first time the phrase had real meaning, and even though fewer Americans than ever own guns, many now figure that gun ownership is entitled to greater consideration. In 2006, according to Gallup poll results, 57 percent of Americans said gun laws should be more strict than they are now. By 2010, and for the first time since pollsters began asking the question, more Americans now say that gun laws should be either less strict or kept as they are.

These three factors, stirred by the gun lobby’s prodigious political machinery, the inability of pro-control organizations to match their counterparts’ efforts, and the country’s more conservative turn, has resulted in the near-divorce of gun violence from gun policy, which produces, among other things, increasingly preposterous assertions.

One commentator, quoted in the New York Times, blithely noted that accused murderer James Holmes “had basically normal guns.” Normal? Well, they certainly were from the perspective of a deranged shooter: an AR-15-type semi-automatic assault rifle with an attachable 100-round drum magazine; two 40-caliber Glock handguns (each of which can receive magazines holding more than 30 bullets), and a Remington 12-gauge pump-action shotgun. In all, Holmes purchased 6,000 rounds of ammunition. Federal law formerly barred ownership of the AR-15, and the high-capacity magazines (that law was allowed to lapse in 2004). And with good reason. Despite the frantic denials of gun advocates, the weapons used by assailants matter – a lot. Imagine if Holmes had entered the movie theater with a bolt-action hunting rifle and a six-shot revolver.

Whether this tragedy was preventable is debatable. But what is not debatable is that the degree of mayhem could have been mitigated by a serious effort to control the excesses of ever-greater firepower. There is no justification for current policies that aid and abet mass murderers.

Robert J. Spitzer is Distinguished Service Professor and Chair of the Political Science Department at SUNY Cortland. He is the author of four books on gun control, including the recently published fifth edition of "The Politics of Gun Control" (Paradigm Publishers 2012).