Meet John Eidsmoe, the man Michele Bachmann calls a "great influence" and who's been involved with racist groups 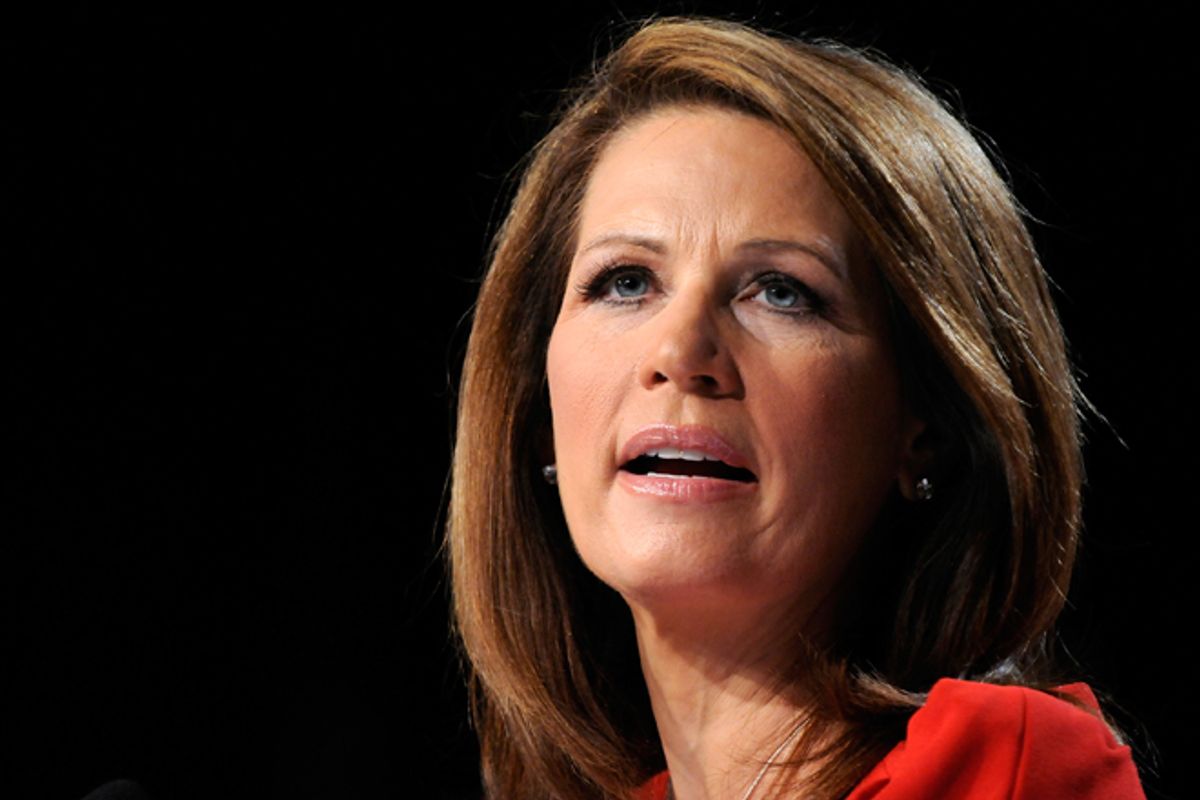 Huma Abedin, a top aide to Secretary of State Hillary Clinton, was placed under police protection this weekend in response to a threat made against her. This came in the wake of Rep. Michele Bachmann's insinuation that Abedin may be a Muslim Brotherhood spy. Bachmann targeted Abedin by name in a letter sent last month to the inspector general of the State Department, and despite widespread condemnation from Republicans and Democrats alike, Bachmann doubled down on her Muslim witch hunt last week. On Friday, she accused Democratic Rep. Keith Ellison, a fellow Minnesota lawmaker, of himself being tied to the Muslim Brotherhood. Even her boss on the intelligence committee, Chairman Mike Rogers, who had initially praised Bachmann, said her "assertion certainly doesn't comport with the Intelligence Committee."

We know one of Bachmann’s inspirations for her Muslim witch hunt is Frank Gaffney, the former Reagan defense official who has made a second career out of finding terrorists hiding in every closet. Bachmann cites him prominently and often. But another inspiration may be John Eidsmoe, a law professor who taught Bachmann at Oral Roberts University and became something of a mentor to her. As the New Yorker’s Ryan Lizza reported last year, Bachmann worked for Eidsmoe on several projects and internalized his Christian-Dominionist worldviews. If biblical law conflicts with civil law, Eidsmoe teaches that “the first thing you should try to do is work through legal means and political means to get it changed.” He told Lizza that Bachmann’s views are entirely consistent with his own.

In August of last year, Bachmann told the Rediscover God in America conference in Iowa that Eidsmoe is “absolutely brilliant.” He “had a great influence on me ... He taught me about so many aspects of our Godly heritage,” she said.

Eidsmoe isn't so popular with everyone, however. Heidi Beirich of the Southern Poverty Law Center explains Eidsmoe this way: “He was a member for a while of the League of the South, which is a neo-Confederate hate group, which has said things like slavery is God-ordained and is explicitly racialist. He also spoke to the Council of Conservative Citizens, which is a flat-out white supremacist group. They’re against interracial marriage, they’ve said things like -- direct quote from them -- ‘blacks are a retrograde species of humanity,’ so you get the idea. So, he’s hung out with hate groups, he’s been a member of hate groups, and his views are just so far outside of the mainstream that it’s amazing. I mean, really, it’s a little shocking to think that the congresswoman would be openly willing to admit that she’s influenced by him,” Beirich told Salon. (Eidsmoe did not respond to requests for comment.)

In Alabama last year, Eidsmoe declared that states have a right to secede, explaining, that Confederate president Jefferson Davis “understood the Constitution better than did Abraham Lincoln.” He was disinvited from a Tea Party rally in Wisconsin in 2010 after the AP brought his past comments to the attention of organizers.

Eidsmoe, consistent with this Christian-Dominionist worldview, has also spoken often about the dangers of Islam. On his website, he lists several seminars he offers, including “Islam & the Crusades.” In the talk, which can be heard in a 2010 recording from a Presbyterian Church in Tennessee, he pretends to be a Crusader who just escaped after 900 years in a Turkish jail. Indeed, Eidsmoe’s view on the relationship between Muslims and Christians doesn’t seem to have evolved much from the past millennium -- essentially, they are still at war with each other.

“I think the correct view of the crusades is to say that they did what was necessary to preserve Western Christianity. And we should be grateful to them for that ... There really is a hatred of The West within Islam,” says Eidsmoe, who is a member of the modern day Knights Templar, the Sovereign Military Order of The Temple of Jerusalem. At the beginning of his talk, he warns that the world’s Muslim population is growing quickly and could overtake Christians one day.

“We’re seeing more and more attempts to bring Shariah law, that is, Muslim law, into place in the United States ... When we look at the history of Islam, we see not just a striving to find tolerance in other parts of the world, but an attempt to take over and impose their system on everybody else. And coming in and asking for exceptions on Shariah law is just the first step. We’ve seen it over and over again in history. We see that it doesn’t end there,” Eidsmoe said in an Internet radio interview.

It’s easy to see how a Dominionist worldview -- that is, one that believes in trying to construct a Christian “God’s kingdom” on earth -- would be hostile to Muslims in general, and not just extremists. Bachmann is an adherent to the same kind of ideology. As the Daily Beast’s Michelle Goldberg wrote during the Republican presidential primary, “If you want to understand Michele Bachmann ... understanding Dominionism isn’t optional.”