President Clinton was unafraid to speak out on gun control. Why won't President Obama? 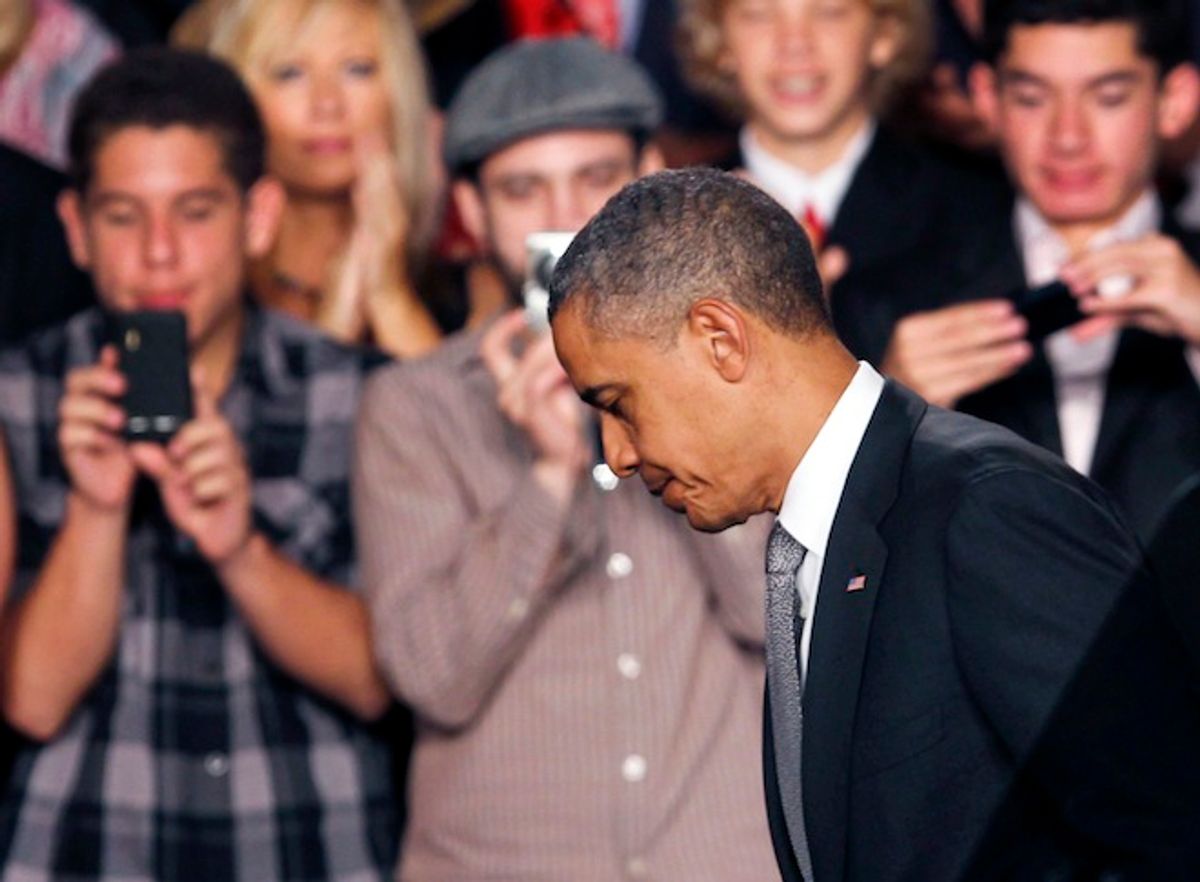 President Barack Obama walks down the steps after speaking about the Aurora, Colo., shooting at an event at the Harborside Event Center in Ft. Myers, Fla., Friday, July 20, 2012. (AP/Alan Diaz)
--

Nearly 20 years ago, Colin Ferguson snuck a handgun and 160 rounds of ammunition onto a commuter train in New York and shot more than two dozen people, killing six of them. His rampage dominated the news and stirred a national outpouring of shock and grief not unlike what we’re now seeing.

It also prompted an immediate call from a Democratic president for a legislative response. Declaring that the epidemic of gun violence in America had “gotten so serious we should consider a lot of things that we haven't done in the past,” Bill Clinton made an explicit call for gun control on the day after the December 1993 massacre. Here, for instance, is how the Dallas Morning News summarized his response:

"It's a terrible human tragedy and my sympathies go out to all the families involved," Mr. Clinton said. "But I hope that this will give some more impetus to the need to act urgently to deal with the unnecessary problems of gun violence in the country."

Had a Senate-passed amendment proposed initially by Sen. Dianne Feinstein, D-Calif., had been in force Tuesday, Mr. Clinton said, the suspected gunman would not have been able to fire as many shots.

"Senator Feinstein's amendment . . . would have prevented that 9mm gun from having a 15-shot clip in it," he said. "It (the amendment) has a 10-shot maximum."

Regarding licensing, the president noted that "we regularly have requirements, for example, for getting driving cars that don't apply to the use of guns."

Looking ahead, Mr. Clinton said that one test of the public mood "will be whether the House is willing to vote for an assault weapons ban . . . on the crime bill." The House, he said, "has generally been more reluctant on these things."

Clinton’s subsequent push netted results, with the Democratic-controlled Congress passing an assault weapons ban in 1994. And just before the Long Island shootings he’d signed the Brady Law, which mandated a five-day waiting period for the purchase of a handgun. The message from the current Democratic president in the wake of Friday’s shooting spree in Aurora, Colo., has been different. Like Clinton, Barack Obama has eloquently addressed the human nature of the tragedy, but when it comes to new gun laws, Obama is intent on saying and doing nothing. As Politico reported Sunday night:

Carney said that includes a reauthorization of the Clinton-era assault-weapon ban that lapsed during the George W. Bush administration.

“As you know, there’s been opposition to that since it expired within Congress,” Carney said. “The president is focused on doing the things that we can do that protect Second Amendment rights which he thinks is important but also make it harder for individuals who should not under existing law have weapons to obtain them.”

Not that the Obama White House’s response is very surprising. Obama, in keeping with what his become his party’s post-2000 tradition, has intentionally stayed away from gun issues, fearing the ire of blue-collar white voters. Plus, unlike Clinton in 1993 and 1994, he faces a Republican-run House, which guarantees that even the slightest effort to tighten gun restrictions will fail.

There have, of course, been a number of high-profile shooting sprees in the last 20 years – Columbine, Jonesboro, Virginia Tech and so on. But they haven’t added political energy to the gun control movement the way the ’93 Long Island incident did. There are two main reasons for this.

One is that the violent crime rate is far lower today than it was in the early 1990s. Even before the Long Island shootings, gun control was on the national political agenda. The concept was embraced by the Democratic Party and broadly popular with independent voters, many of them suburbanites who feared violence might soon be coming to their backyards. A 1993 poll found that one-quarter of voters nationally believed crime was the most pressing issue facing the country. Shortly thereafter, though, the crime rate began plunging dramatically, and the issue lost its urgency. Near-daily headlines about gun-related murders perpetually stoked the gun control debate in the early '90s; today, the issue only seems to bubble up in the immediate aftermath of mass killings.

Related to this is the Democratic Party’s shift on the issue. As I’ve outlined before, the party’s leaders concluded after the 2000 election that gun control advocacy had become a net liability. With crime dropping, the issue no longer gave them much of an edge with independent suburbanities, but it did alienate blue-collar whites, particularly in rural areas. Many blamed Al Gore’s defeat on gun control, and the next two Democratic nominees – John Kerry and Obama – made a point of deemphasizing the issue. Obama has governed in that same spirit, launching no new anti-gun initiatives.

New York Mayor Michael Bloomberg is now trying to create public pressure on Obama (and Mitt Romney, for that matter) to take a clear position on gun control measures. And not all Democrats are onboard with the approach Obama’s been taking. Sen. Frank Lautenberg, for instance, is using the tragedy to renew his call for a ban on the sale of high-volume magazines. But when you compare Obama’s response to Aurora with Clinton’s response to Long Island, you realize just how dramatically the politics of gun control have changed over the past two decades.