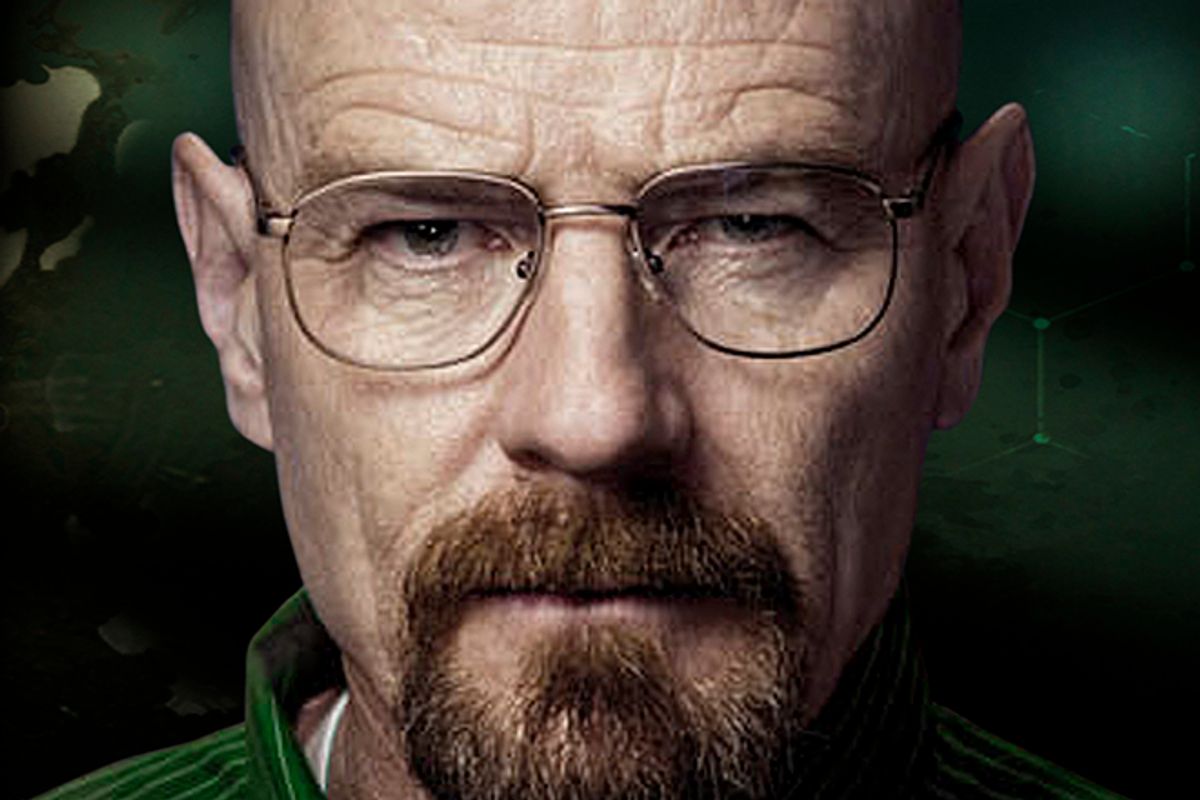 “Breaking Bad” has always been hyper-violent, and by necessity, the Aurora shooting forces you to look at its violence differently. But as with so many of the finest episodes of “Breaking Bad,” “Madrigal” deals with the hangover of violence, with how it ravages the soul of those who commit it. Like some malignant hologram, the characters are surrounded by the trace images of their actions, and how they react to that residue defines them. The gap between Walter and Jesse continues to open up, as they look into the abyss, and the abyss looks back.

But Walter White is not looking too hard.

The great thing about “Breaking Bad” is the way that it sweats the details, and rewards intense scrutiny. This week’s episode calls in a lot of outstanding loans, and invests them immediately. Like the season premiere, “Madrigal” was written by Vince Gilligan, and as with all of his episodes, we’re in good hands.

Never has a “crime show” taken so much care to obsess over the consequences of aforementioned crimes. As early as the second two episodes, when the disposal of two henchmen plays out – excruciatingly – we see first-hand how crime not only doesn't pay, but costs more than one ever knew was possible. Acid turns bodies and souls into toxic mulch, and Walter’s descent into the basement of his own soul begins as he converses with the remaining imprisoned henchmen, the late, unlamented “Krazy-8.” How can you kill a man who likes the crusts cut off his sandwiches? Mr. 8’s death by bicycle lock is almost an afterthought. A part of Walter died too in that scene, and those deaths have continued across 47 episodes. Violence is messy, and all about loose ends, and the pulling of these ends is what drives “Madrigal.”

A very wise cop once gave me some life-changing advice, that I will now pass on to you. “No fish ever got caught by keeping its mouth closed."

That sage wisdom could stand us a dedication to this week’s installment of “Breaking Bad.” After a scene-setting, yet somewhat somnambulant season premiere, it is thrilling to see that we’re now hitting on all 12 cylinders, like the jet black Mercedes that our new supervillain must have waiting for him in his reserved space in the Madrigal parking lot.

Which brings us to the Germans. We knew they were out there, and now, here they are. One of the many narrative arcs of “Breaking Bad” is in watching the obliteration of Classic Walter’s sense of order. That obsessive remodeling of the rotting sub-basement of his home mirrors his internal changes. Now, as the New Walter’s internal structure has been reconstructed, with the arrival of the Germans, we get a glimpse of another manifestation of the New Order. Never has a taste test been more ominous as the pre-credit sequence when we finally visit the Madrigal Corporation. And talk about German efficiency! It’s always good to know that their Evil Conglomerates have such conveniently located employee suicide heart-stopping devices. But those scenes are only a prelude, as Breaking Bad” turns left at Albuquerque, and imports its own turtleneck wearing, ominously civilized but you-know-he-is-Evil James Bond villain. All that was missing was the white Persian cat in his lap. I half expected Hank was going to drop through the floor of the DEA conference room to the waiting Shark Tank.

And how are our principals doing? As we cut to a montage of Walter and Jesse looking for the rogue faux-ricin cigarette, I am reminded just how great a comedy team they can be. Laurel and Hardy, Abbott and Costello and definitely, Kramden and Norton come to mind. Bryan Cranston and Aaron Paul just play off each other brilliantly, and in past, hermitically-sealed-due-to budget-costs “bottle” shows, like “Fly” or “4 Days Out,” the two are all we -- and they -- need -- to captivate. But for every brief shaft of sunlight in Breaking Bad”, there is the darkness. Seeing Jesse break down after he “finds” the cig, and refer to Walter as “Mr. White,” a title of respect Walter so does not deserve, is simply heartbreaking. This is another in the collector's edition of “Why We Hate Walter” moments.

Speaking of great teams, let’s talk about one of the greatest scenes in “Breaking Bad” history, when worlds finally collide. And that would be the interrogation scene between Mike Ehrmantraut and Hank Schrader. Beautifully written, brilliantly performed by Jonathan Banks and Dean Norris, the scene contained multitudes, and should serve as a textbook example of how to survive a police interrogation. When Hank tosses out his granddaughter's name, we almost think Mike will crack. Indeed, one senses a hairline fracture. But then, the moment passes, and the fish keeps his mouth closed.

There is one new fish who has gone for the bait, hook, line and sinker. “Breaking Bad” has always been great on the “product launch” of new characters. But they stumbled a bit with the introduction of Lydia, the neurotic, yet anthracite-hearted bookkeeper of Casa De Fring. Dressing like Natasha Fatale, Lydia’s diner meet-cute scene with Mike was too cute by half. But the new story arcs that scene put in motion led to some extraordinary moments that show “Breaking Bad” at its dramatic best.

When we last saw Fring “Employee Of The Month” Chou in the Gilligan-written Season 3 finale “Full Measure,” he was trussed up like a turkey in a warehouse, only to be dramatically rescued by Mike. Here is where those details come into play. The crafty “security consultant” disabled the warehouse security system through the high-tech means of some spare balloons he had bought for his granddaughter's birthday party – a granddaughter who plays a key role in “Madrigal.” That previous episode also demonstrated Mike’s ability to use walls and doors as a lethal weapon, a scene echoed this week with another priceless cameo from a stuffed animal. As Mike walked up to Chou’s house, I honestly had no idea of what was going to happen next. I was as surprised as the hapless Chris. Chris’s cold-blooded demise, of course, only heightens the potency of Mike’s next house call. “Breaking Bad” rarely writes a story check its creative account can’t pay, and the collateral damage of violence is once again brought home – literally.  As the trembling Lydia shifts the conversation to how her little girl will deal with the aftermath of her obliteration, Mike undergoes a moral transformation that goes against everything we have seen before. But in this one scene, you can watch – feel -- something shift from inside his skin. When the call comes from Chau that set this scene in motion, as Mike plays with Kaylee, we feel with him how his one last standing temple has been profaned. Everything that follows is both inexorable, completely logical and yet, surprising and shocking. It doesn’t get better than that, on “Breaking Bad,” or in drama.

* Keep tabs on that wall socket where the ricin is stored. We will be revisiting that hidey hole – and that tablet -- some time in the future.

* When Mike turns down Walter’s partnership offer, I honestly came to the realization that Walter is capable of anything. It was the first time the New Walter really scared me. It will not be the last, I bet.

* Gus Fring’s special foil-wrapped Bar-B-Que’d Sea Bass? I want that recipe. And sorry to see Special Agent In Charge Merkert get the old “heave ho.” Maybe he can work in the Louisville, Ky., “Island Of Misfit Marshalls” office in “Justified.” In any event, Hank better watch out for his replacement.

* “The Caine Mutiny” on the TV in Mike’s apartment. Will Mike and Jesse have to relieve another repressed by-the-book psychotic of command soon? A shout out here to the 97-year-old author Herman Wouk, still alive and well, and hopefully, an AMC subscriber.

* Who would have thought that Mike and Jesse would become the moral center of the “Breaking Bad” universe? But here they are.

* Walter is so repellant, I cringe to see him even hold his baby, let alone cuddle with a cringing Skyler. And, based on that scene, here is my first in a continuing line of wrong predictions as to How It All Ends. Collect them all. Batteries not included. Here we go: Skyler is the one who finally puts Walter down, and he welcomes it.

“Breaking Bad” is the most effective documentary of the banality of evil since the Eichmann trial. It is a how-to guide to moral degradation, but as such, is profoundly moral. It weighs the consequences of violence, and puts that weight on our shoulders. It is a burden that never gets easier.

I’m saving the best for last. On Friday morning after the Aurora shootings, I spoke with Vince Gilligan about the corrosion of violence, his creative process, his desert-island episode, and the wit and wisdom of Stanley Kubrick. That interview will be appearing soon! No clicking!