Chris Shays has no respect for Linda McMahon 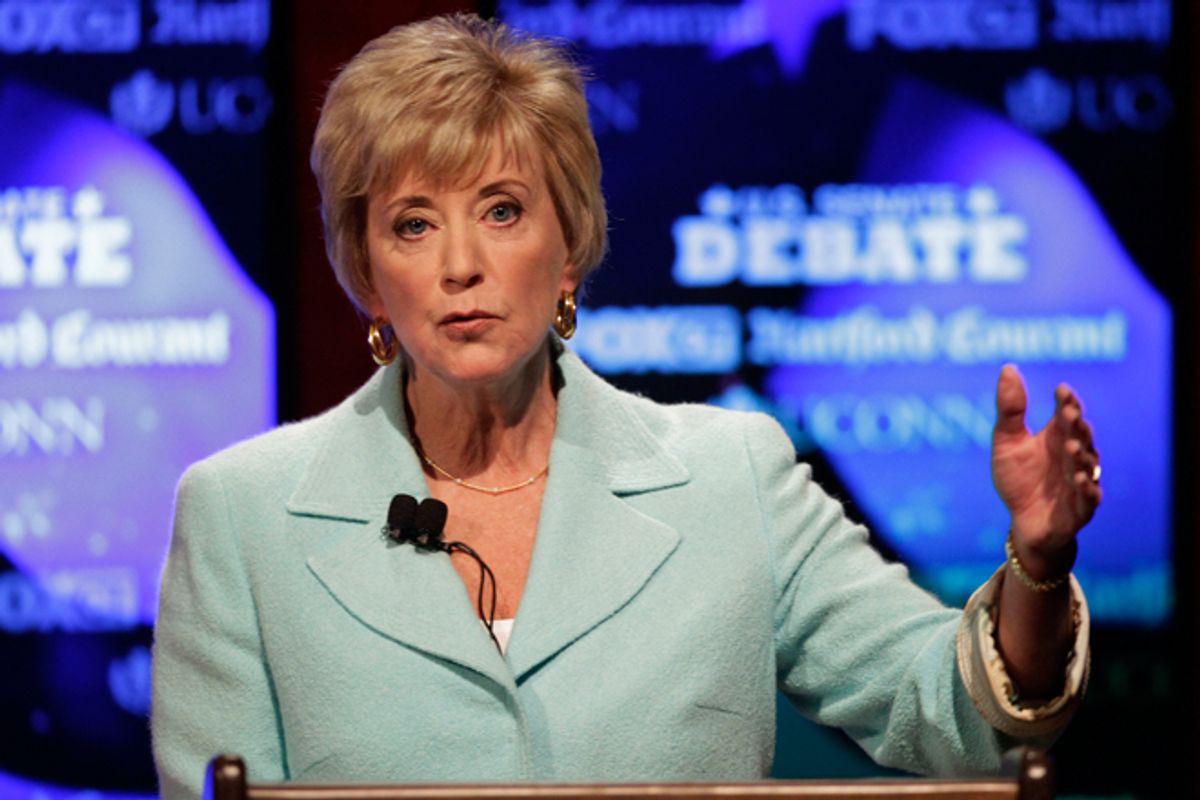 Remember Linda McMahon, the professional wrestling executive who ran for U.S. Senate in Connecticut in 2010 and lost by a rather large margin to Richard Blumenthal? She's back, now running for the seat of retiring Sen. Joe Lieberman, and she has basically bought herself the Republican nomination, again. And just like last time she has defeated a more centrist Republican who might've actually had a chance to win the general election in liberal Connecticut. And he's unhappy about this fact, and he is expressing his unhappiness admirably.

In 2010, McMahon won just barely more than 50 percent of the vote at the state convention, then won the primary election with 49 percent of the vote, beating out two opponents who essentially split the anti-McMahon vote. (One had suspended his campaign and then relaunched it. The other appeared on the ballot via petition.) This year, she is running for the nomination against Chris Shays, a former congressman and the last Republican to represent New England in the House of Representatives as of his defeat in 2008.

Shays is pro-choice, pro-gun control, an environmentalist, pro-gay rights, pro-campaign finance reform -- basically your classic New England Yankee Republican. Or as we call them now, "Democrats." This helps to explain why he's having so much trouble defeating someone as ridiculous as Linda McMahon, whose sole asset as a politician is her great wealth, which she earned off the labor of poorly treated "independent contractor" wrestlers who were not even offered health insurance as they destroyed their bodies with drugs in other to retain their dangerous jobs with her company, World Wrestling Entertainment. She is a rich "outsider" who repeats dumb Tea Party lines about the Fed and the deficit, and he is a "career politician" who represents a long-dead faction of the Republican Party.

Shays lost at the convention by a rather wide margin, but his 32 percent of the vote did qualify him for the primary, which he is not really expected to win. And I realize he's still in mid-campaign mode, and so not really expected to sound conciliatory, but this is the sort of wonderful thing I wish candidates would say about their opponents more often:

“I have never run against an opponent that I have respected less — ever — and there are a lot of candidates I have run against,” said Shays, who was a congressman for 21 years and served in the state legislature before that.

That's Shays talking to the New Haven Register editorial board about McMahon. He goes on!

“I thought she was embarrassingly clueless” in the second and last television debate he had with McMahon, which took place in the studios of Connecticut 30 NBC, he said.

Shays said he would not vote for Murphy and he won’t campaign for any Republican who is also on the independent line on the ballot, in addition to the Republican line, which McMahon is trying to do.

If she wins the primary, he said he won’t change his mind about her.

Well! Tell us how you really feel, Mr. Shays?

None of this is the kind of thing you can "walk back" once you lose and you find yourself encouraged to support the victor on behalf of the party, and that is why it's wonderful. It's a brutally honest reminder that "civility" is an overrated political virtue. If Chris Shays thinks his opponent is stupid and would be a horrible senator, he owes it to the people of Connecticut to say so explicitly.

It's certainly better than the sad spectacle of a bitter loser pretending to love the person who beat them (poor Rick Santorum!). Being a proper sore loser is sadly discouraged in politics, but it is so much more refreshing than all that phony graciousness.

(If Shays loses the Republican primary, though, there's still the "Connecticut for Lieberman" line, isn't there?)