Will McAvoy, you're so smart!

"The Newsroom's" conceit of having characters cover recent news events has led to smugness, but it doesn't have to 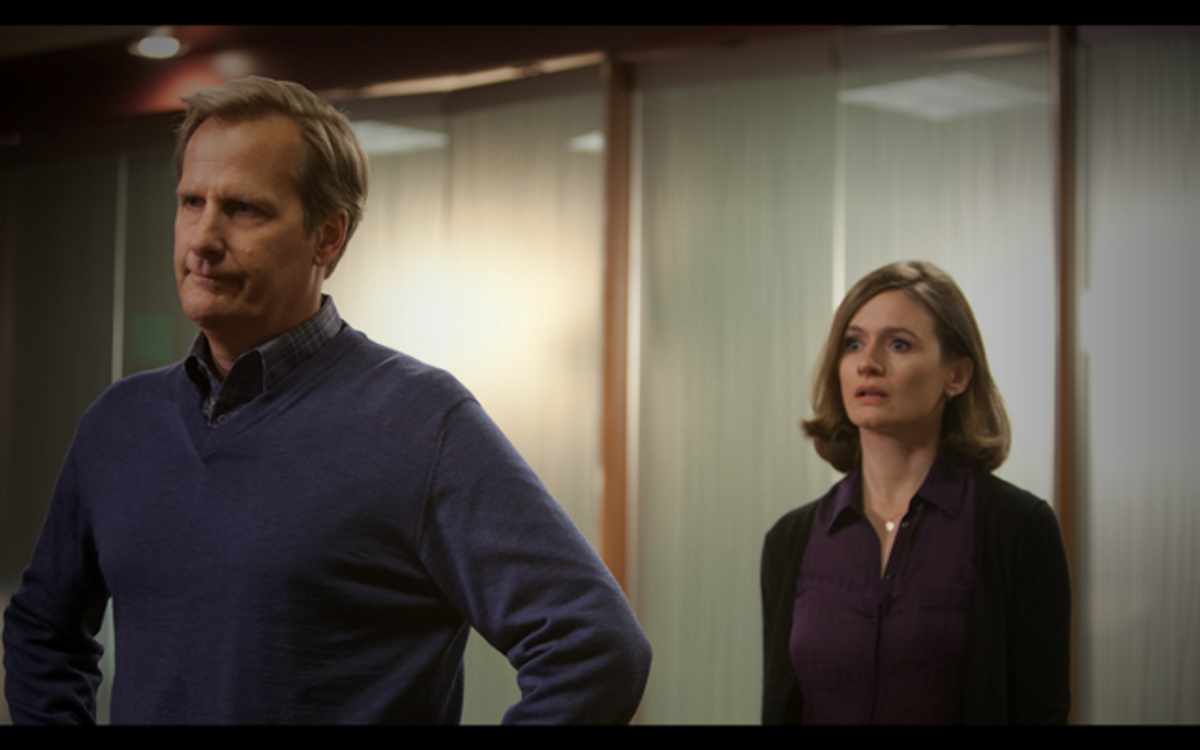 There’s a moment about halfway through the pilot of "The Newsroom," Aaron Sorkin’s frustrating HBO series about a fictional cable news program, in which the show seems on the verge of delivering the kind of great story it wants so desperately to tell. Up to this point, it has been close to unwatchable, with its attempt to re-create the rhythms of classic journalism movies coming off as alternately sanctimonious and hysterical. Then, at a rare pause in the action, Jim Harper, a news producer played by John Gallagher Jr., hears a soft beep from the computer beside him. Glancing around uncertainly, he leans over to check the breaking news alert, then announces to the rest of the room: “There’s been an explosion off the coast of Louisiana.”

It’s only then, if we haven’t already gleaned it from the reviews, that we realize the episode is taking place on April 20, 2010, and that we’re witnessing the initial rumblings of what will shortly be known as the Deepwater Horizon oil spill. Critics have said the show’s core conceit — an imaginary news team covering actual events of the recent past — robs the series of drama, but that doesn’t have to be the case. Indeed, when I first heard the premise, it seemed like a clever idea that could provide fuel for countless stories, as well as irony and suspense in their purest form, as the show’s characters scrambled to catch up with what the viewer already knew. (It didn't take long on Friday for Twitter to wonder how "The Newsroom" would cover Aurora.)

Unfortunately, it takes the pilot about 30 seconds to destroy any sense of narrative possibility, which lasts only until the characters begin to talk. Within minutes of the news flash, Harper has already pieced together its full implications, thanks to lucky calls from sources at Halliburton and BP — later revealed to be his sister and an old college roommate — that put him three steps ahead of every rival news organization, as well as of most of the audience. Before long, we’re treated to an unbelievable scene in which Harper and another journalists provide a rundown, with incredible foresight, of exactly how the story will unfold over the coming months, down to the number of days before the oil reaches the coast of Louisiana. As one character concludes somberly: “It’s going to be the biggest environmental disaster in history.”

In short, Sorkin undercuts the suspense at once to make his favorite characters seem astoundingly prescient, while others come off as clueless. And it isn’t hard to see why. This kind of historical irony is one of the few tools in an author’s bag of tricks that works reliably every time, with no skill required, so that even so talented a writer as Sorkin must find it difficult to resist. As Harper argues for making the oil spill the night’s top story, only to be shot down repeatedly, it gets our blood up, even if we’re well aware that we’re being jerked around. We see the same tactic in a topical movie like "Green Zone": When Matt Damon is ordered not to question intelligence about weapons of mass destruction in Iraq, it tells us something about the characters, but only because we have access to tomorrow’s newspapers.

"The Newsroom" has received a lot of flak for making use of real incidents from within recent memory, as when its news team outreports the rest of the world on the shooting of Gabrielle Giffords, but this kind of easy historical irony is everywhere. We find it in "Citizen Kane," when Kane assures a reporter that there won’t be a war in Europe, and in "Gone With the Wind," when Scarlett’s unlucky first husband says: “Don’t cry, darling. The war will be over in a few weeks and I’ll be coming back to you.” And it’s all over movies like "The Help," in which the characters are neatly divided into good and bad camps, from the safe remove of historical distance, by the ease with which they anticipate our later social assumptions. We’re repeatedly flattered for knowing more than these people about cultural upheavals they haven’t lived through yet, culminating in the moment when a New York editor tells the protagonist to hurry up with her study of black maids “before this whole civil rights thing blows over.”

And this sort of irony goes back a long time. "The Newsroom’s" Will McAvoy, the unfailingly prophetic anchor played by Jeff Daniels, is just the latest version of Cassandra, who saw that the Trojan War would end rather badly but was condemned by the gods to be ignored. If this device has remained popular for thousands of years, it’s because it allows writers to create useful dramatic effects with hardly any work. As the author of a novel set in New York before the financial crisis, I know that it’s incredibly tempting to have your characters hint darkly at the trouble ahead, and while I couldn’t avoid it entirely, I did my best, bearing in mind such unfortunate examples as the film "Ship of Fools," set in the early 1930s, in which a Jewish character says: “There are nearly a million Jews in Germany. What are they going to do — kill all of us?”

"Ship of Fools" is an instructive case, because it demonstrates how the same material can be twisted to various ends. Katherine Anne Porter’s novel has its problems, but for the most part, it avoids turning itself into an obvious parable. The 1965 film by director Stanley Kramer and screenwriter Abby Mann, a clear ancestor of the modern prestige picture, has no such compunctions, and Pauline Kael’s scathing review is still the best takedown I’ve seen of the cheaper forms of historical irony, in which characters are judged by how they behave based on what we know from hindsight: “Brutally sure how everyone should have acted, Kramer and Mann were not slowed down by indecision, doubts, ambiguities. We weak mortals might not be sure how the world worked, so they explained it to us.”

Which sounds a lot like Sorkin at his worst. Basically, there are two sorts of historical irony: the kind that reminds us, unsettlingly, of how little we ever really know about the times in which we live, and the kind that reassures us that, faced with the tough choices of the past, we’d be on the side of the angels. Properly done, the former kind of irony can be a powerful tool. Many great novels, as the scholar Edward Mendelson notes, are set about 20 years before the present, allowing their characters “to make accurate prophecies of events that occur between the time of the action and the time of writing.” At its highest level, this gives us a book like "The Magic Mountain," in which some voices are more prescient than others about the future of Europe, but it hardly matters: Hans Castorp listens attentively to both sides, but he still ends up as just another soldier in World War I, marching to almost certain death.

And we can find sophisticated examples of historical irony even on television. "Mad Men" isn’t entirely above the kind of cute, winking effect we often see elsewhere, as when a character dismisses a politician named Romney as “a clown,” but at its best, it gives us plausible people dealing with history in real time, and it generates authentic suspense from our knowledge of what lies ahead, as when we’re shown the invitation for a wedding scheduled for Nov. 23, 1963. When characters display cultural foresight, it’s usually by accident: Paul Kinsey dates a young black woman mostly to delight in how progressive he is, and he signs up voters in Mississippi to score points with his girlfriend, who dumps him after three days.

As far as contemporary events are concerned, one of the best recent uses of historical irony occurs in J. C. Chandor’s neglected "Margin Call," set at an investment bank in the days before the financial downturn. The film has its own Cassandra figure, a risk analyst who foresees the coming implosion, but while Sorkin might have made him the hero, Chandor sweeps him aside to focus on a group of smart, flawed characters trying to deal with events that have already passed them by. It leads to a heartbreaking speech by an executive played by Kevin Spacey, who tells his trading team: “But have faith that in the bigger picture our skills have not been wasted, we have accomplished much, and our talents have been used for the greater good.”

Here our knowledge of the future heightens the drama, rather than diminishing it, and it’s an example that "The Newsroom" could stand to follow. Journalists have been rightly annoyed by the show’s superior tone, but viewers should be equally irate about the narrative opportunities being squandered. If it stops using hindsight to score easy points, keeps its protagonists one step behind us rather than two steps ahead, and even allows them to be wrong on occasion, its premise could still pay off handsomely — and although Sorkin’s recent purge of his writing staff may not inspire much confidence, last night’s episode, which mines real suspense from the uprising in Tahrir Square, is reason to be cautiously optimistic. Even though, unlike Will McAvoy, I can’t see into the future.