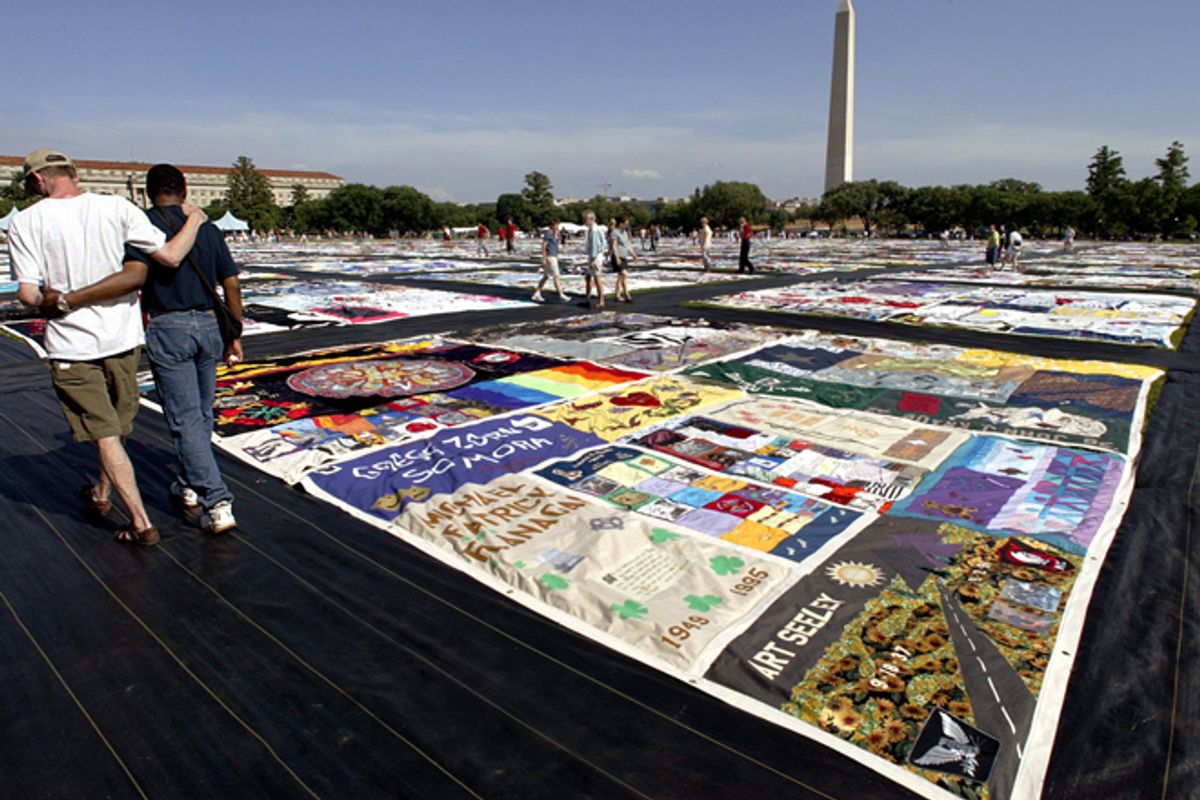 The International AIDS Conference convenes in Washington, D.C., this week for the first time in 22 years, made possible by President Obama’s repeal of Reagan-era legislation that banned people who are HIV-positive from entering the U.S.  While there have been incredible advances in the intervening decades, it's worth remembering the arts-based activism that helped bring it about.

Across town and weather permitting, volunteers will begin laying out the AIDS Memorial Quilt. The Quilt hasn’t been laid out in full since 1996, which was, not coincidentally, when we as a culture stopped talking about AIDS. After 1995, new retroviral therapies began drastically slowing the death rate, and conversation shifted to HIV: better treatments, better tests, slowing infection rates. AIDS, that gruesome specter that had dominated the conversation for nearly a decade, and the battle against it, was put back in the closet.

But over the past year, AIDS has reentered the conversation, this time not as a spook, but as inspiration. Maybe it’s the debates over Obamacare. Maybe it’s the rise of Occupy. Maybe it’s the battle for marriage equality. Or maybe, as many former activists mentioned this weekend in D.C., enough time has passed that the post-traumatic stress that marked the fight has finally begun to subside.

"Vito," a documentary on gay rights activist Vito Russo, premiered this week on HBO. Another, "How to Survive a Plague," hits theaters in September. A Tony-winning revival of "The Normal Heart," Larry Kramer’s 1984 play about the first years of the epidemic, has just started its national tour. There’s an AIDS Memorial Park being proposed in New York. In a recent interview, a young gay activist went so far as to refer to the activism of the AIDS years as “glamorous.”

“There’s a huge hunger for it,” says Avram Finkelstein, an early ACT UP member. “And a mild sense of betrayal that they haven't been handed this material.”

There’s good reason to be angry. As a strategy for creating change, AIDS activism was one of the most powerful movements of the 20thcentury. Over the course of a decade, in the midst of caring for the wounded, a community waged war not only on a virus, but on sclerotic institutions that refused to deal with it. Their tactics – visually sophisticated, goal specific, media savvy -- are still potent today. There’s a lesson here, whether you’re Occupy or the Tea Party.

You can’t distill a movement’s success into a sole component part, but few activist movements before or since have used images as effectively, or wielded art as sharply as the AIDS activist movement did. And the media noticed.

“I do feel something different happened here,” says Finkelstein. It was perhaps the first political movement, he says, that co-opted the language of advertising.

“There's always been a history of agitprop or art-making collectives coming out of the left, but to be queer is to coexist with codes on a much deeper level, and codes are also what run capitalism and advertising and everything in an image culture.”

Finkelstein was a founding member of Gran Fury, the propaganda wing of ACT UP, and responsible for some of the group's most iconic work: the blocky ACT UP logo that broadcast both solidarity and strength, acid green posters with AIDSGATE under a red-eyed Reagan, and the Silence = Death poster.

“We didn't start the collective to make a work of art; we did it to create political consciousness raising,” he says. “It had to stimulate the community who needed to organize around the issue.”

In the first years of the epidemic, most of the discussions in the gay community were limited to distributing information about the disease. "The Normal Heart" documents just how resistant the community was to anything remotely political. “I wrote the play to make people cry,” says Kramer.

Likewise, the anonymous wheat-pasting of the Silence = Death poster around Manhattan in 1986 was meant to shock a community into action.

“There was something so visceral and immediate about it,” remembers Jeffrey Schwartz, the director of "Vito." “I was very disconnected about the community at the time but you knew these were fiery and passionate people.“

The Silence = Death graphic was striking and inscrutable. It appeared on stickers at the Democratic National Convention, on T-shirts in New York's West Village, on pins on college campuses.

In a world where the communities affected by AIDS were rendered invisible by the mainstream media, survival was contingent on getting seen. And in a war of media attention, art was the best weapon.

The AIDS Memorial Quilt was conceived as a way to add names to statistics. Anne Balsamo, a professor at USC who was on the National Mall this weekend demonstrating a mobile app that allows users to locate and view each of the 49,000 panels, says the original intention was as anti-art.

“Each of the panels is 3-by-6, the size of a coffin cover,” she says. “When they were first laid out at the 1987 March on Washington, it was we’re laying our dead at your feet. At the time, President Reagan refused to even say the word 'AIDS.'”

Like Flanders Field or the Vietnam War memorial, the quilt’s strength is both the vastness of its body and the specificity of its component cells: 48,000 panels decorated with applique and jeans, sequins and photos, hand-sewn memorials to those lost to a plague.

The medium may have been the message, but for AIDS activists of the late '80s, the message was never in doubt.  Even the protests were performance art, not for its own sake: fund research, speed up the drug trials, talk about safe sex.

When the FDA refused to speed up drug trials, ACT UP demonstrators hanged the chairman in effigy. When President Bush claimed that the National Institutes of Health was already adequately funded, they dumped cremation ash on the White House lawn. When Sen. Jesse Helms opposed safe sex education, activists covered his house with a giant condom. It was Christo meeting the Yippies. The nightly news loved it and the targets caved.

ACT UP was the original occupier of Wall Street. When Burroughs Wellcome priced AZT outside the reach of most patients, members of ACT UP chained themselves to the balcony of the New York Stock Exchange and hung a sign that read, “Sell Wellcome.” The next day, the company cut the price of the treatment by a third.

So why hasn’t the success of ACT UP replicated more widely? While the movement had long-lasting effects among disease advocacy (and colored ribbon producers), many activists under 35 can’t tell you what ACT UP stood for, let alone what it accomplished.

“Part of the problem is that half of my generation is gone,” says Cleve Jones, who created the quilt and credits his existence to the experimental drug trials in which he and other ACT UP members fought to be included. “There's been a real disruption in the transmission of information from one generation to the next.”

There was an overwhelming desire to move on after years of emotional trauma. Once people stopped dying en masse, no one was eager to go back and revisit a holocaust. The urgency faded, and under Clinton, the focus shifted to issues like marriage and the military. The new power players were black-tie inside-the-Beltway organizations like the Human Rights Campaign and the National Gay and Lesbian Task Force.

But Larry Kramer, one of the founding forces of ACT UP, cautions that change rarely comes from the top down.

“If you're being paid, you're not an activist,” he says. “They kiss ass. We hold asses to the fire.”

And Jones, despite dismay over a new generation unaware of the struggles and less vigilant about safe sex, still sees the confrontational model that they developed as the key.

“The focus on marriage equality had its roots in the epidemic,” he says, citing both new media actions like Dan Savage’s viral “It Gets Better” video campaign, and old, like the glitter-bombing activists of Get Equal.

But a legacy that was almost lost may finally be recovering its value. Finkelstein says that Gran Fury was recently approached to host a workshop for members of Occupy.

“The only reason to make political art is to make people look at things differently,” he says he told them. One thing he’s learned is that political action is cumulative.

Michael Stabile is a writer and filmmaker based in Los Angeles. He is currently in production on a documentary about pornographer Chuck Holmes and his relationship with the gay rights movement. You can follow him at twitter.com/mikestabile.