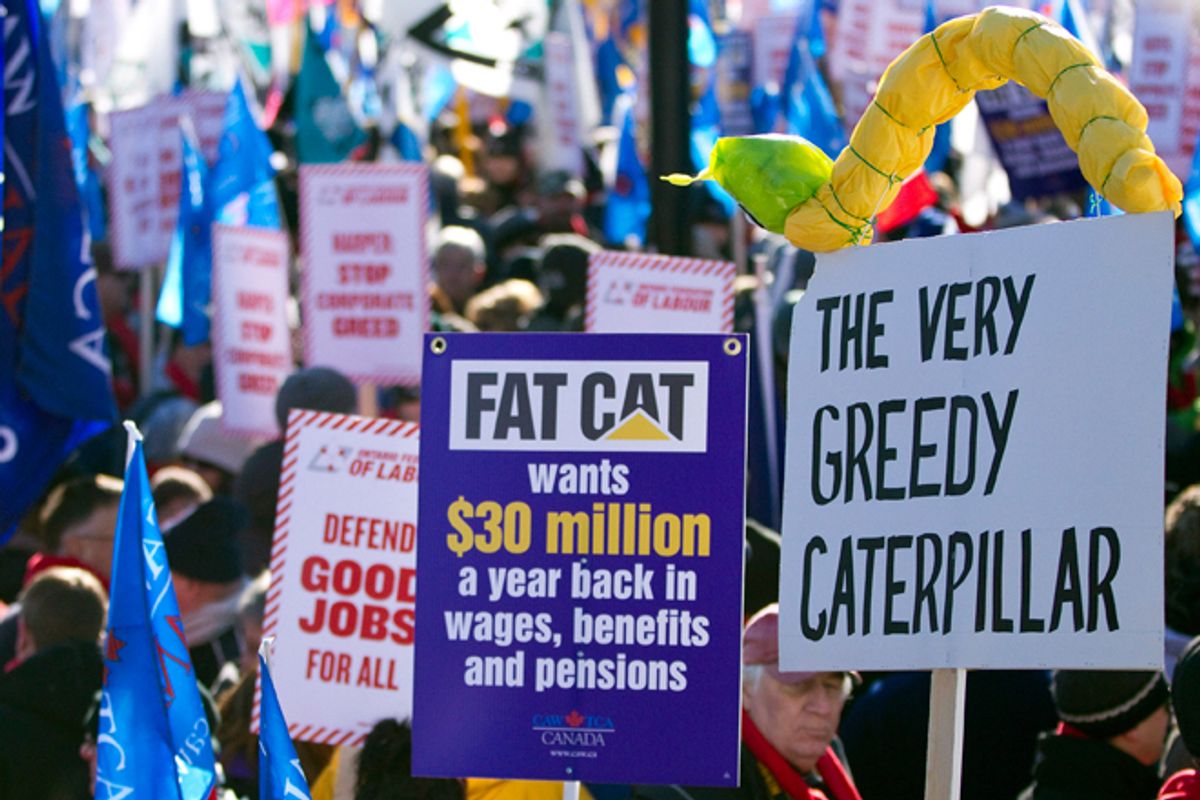 Thousands of unionists from across Ontario and the United States gather in Victoria Park in London, Ontario, on January 21 for a rally in support of Caterpillar workers. (Reuters/Geoff Robin)
--

It did not take more than a quick glance through the headlines Monday to sum up the last 40 years of brutal U.S. economic trends. In the New York Times, David Leonhardt announced the debut of a series titled "A Closer Look at Middle-Class Decline." Meanwhile, the Associated Press reported that "U.S. Poverty Heads Toward Highest Level in 50 years." And New York Times ace labor reporter Steven Greenhouse provided the final punch to the solar plexus, "At Caterpillar, Pressing Labor While Business Booms."

The numbers are grim and outrageous.

The significance of these numbers should transcend the political bickering over which party should be blamed for the slow recovery from the great financial crisis. The forces responsible for growing poverty, rising income inequality and the steady withering of organized labor have been in place for decades -- and were aided by both parties. Globalization, technological progress, Washington's political capture by corporate special interests, regressive changes in the tax laws -- for 40 years the millstone has been grinding away.

Caterpillar's example is especially instructive. The maker of construction and mining machinery is now largely immune to the ebbs and flows of the U.S. business cycle. For several years now, the company has generated the majority of its revenue from overseas sales: The booming economies of China, India and Brazil have been gobbling up earth movers like Tic Tacs. Caterpillar's shareholders and executives have profited enormously from the maturation of these emerging economies. But the company sees no need to spread the wealth to its workers. And why should it? Caterpillar owns all the leverage. If American workers prove too obstreperous, China would be happy to accommodate Caterpillar's state-of-the-art manufacturing facilities across the Pacific. Caterpillar's stinginess in Joliet offers a perfect demonstration for how globalization contributes to rising income inequality in the United States.

The obvious way to redress this miserable state of affairs is to tax the hell out of Caterpillar's overseas profits and executive salaries and use that cash to pay for an expansion of the safety net that would cushion the dual blow of globalization and technological modernization. Indeed, the spiking poverty rates of the past few years would be inflicting far greater harm were it not for the government aid programs currently in place -- food stamps, unemployment benefits, Medicaid. Yet every single one of those problems is under sustained attack. The most likely scenario for the future includes little hope of raising taxes, and high likelihood of severe cuts to government services.

Which means every single trend highlighted above will just get worse.