"Two of the U.K.'s beach volleyball players had their butts sponsored by advertisers" 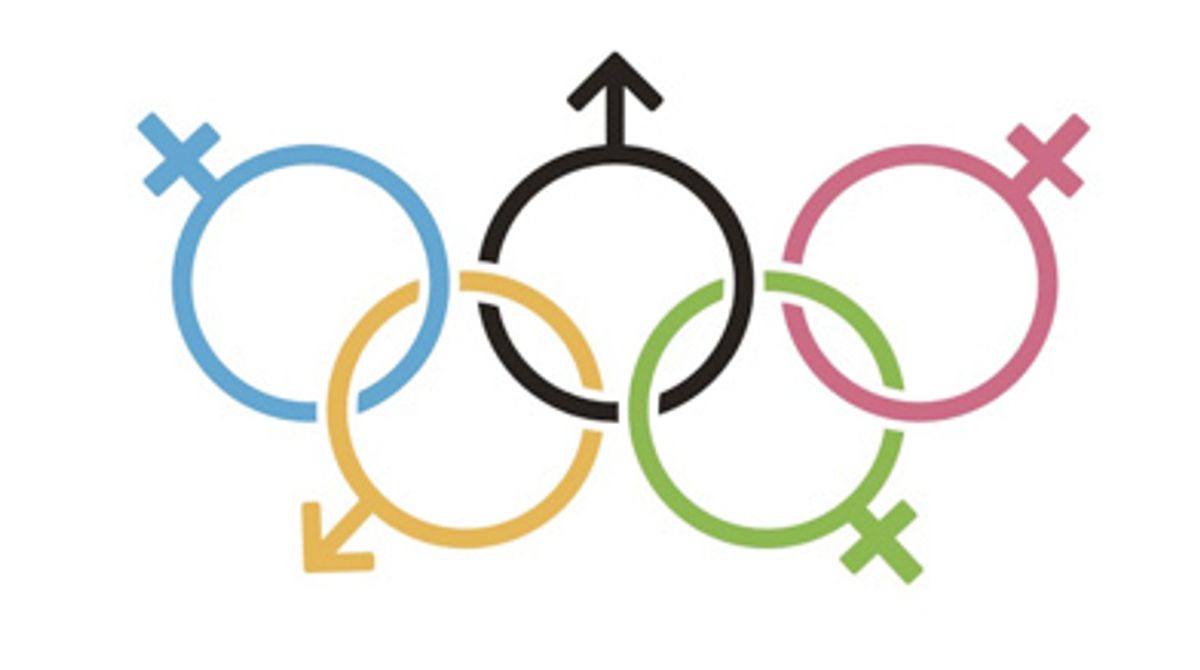 The Olympics started as an über-macho, male-only competition in ancient Greece. While a lot has changed since then, women are still facing sexism when it comes to the Games.

Much of the hype surrounding the 2012 Summer Games in London (which kick off Friday, July 27th ed.'s note: look for our coverage!) has centered on the achievements of female athletes. The Olympics have been very empowering for women: the U.S. is sending its first ever female-majority team to the games, tennis pro Maria Sharapova is going to be Russia's first female athlete to carry her country's Olympic flag, women's boxing is being allowed for the first time, and—in the biggest news since women were first allowed to compete in 1900—for the first time ever, every single country in the Games is sending women to compete. At the 2008 Bejing summer Olympics, Saudi Arabia, Qatar, and Brunei were the only three countries in the world that did not send female athletes to the Games. This year, after facing pressure from the International Olympic Committee (I.O.C.), all three countries announced that they're sending women to compete. Great news! But it's not all great.

Even though the 2012 Olympic Games are undeniably making strides for female athletes from all over the world, these amazing steps forward are countered by sexist Olympic advertisements. And, with all the hype that comes with the Games, so too comes the reinforcement of sexism and gender norms. It might not surprise you that beach volleyball is at the top of the list of sexist advertising offenders. Why? The bikinis that athletes wear fuel more lewd comments and creepy spectators than any other sport in the Olympics.

In the qualifying tournaments leading up to the 2012 London Games, two of the U.K.'s beach volleyball players had their butts sponsored by advertisers. Yes, you saw right, advertisers paid to have their Q.R. codes pasted on the players' bikini bottoms. And if the image of someone watching the TV with a smart phone in hand trying to snap a picture of that doesn't gross you out already, this Q.R. code takes the viewer straight to a gambling website. Not that if the code took the viewer to a website for charity would I find it any better, but come on, could you make it any easier to bash on this advertising choice? What does gambling have to do with volleyball?

The I.O.C. forbid the use of these codes on the uniforms in the Summer Games, but the damage has been done—even though the players will not be wearing these bottoms, these images have circulated all over the Internet and are associated with the Olympic players since they wore them in tournaments leading up to the Games.

ESPN's annual "Body Issue" is out and it features several team U.S.A. Olympians. But as Feministing points out:

"over half of the female athletes were shown only as passive eye-candy while virtually all of the men were shown in  action shots:

The issue stays true to sexist sports coverage form by showing men primarily as powerful athletes and female athletes as demure sex symbols. Way to reinforce the idea that women only use exercise to have bodies that feed into the male gaze. And, naturally the athletes chosen are women that fit stereotypical conventions of beauty. Don't get me wrong, I think the "Body Issue" did a couple things right—like featuring paralympic rowing athlete Oskana Masters and, sigh, badass soccer heartthrob Abby Wambach*. But come on, ESPN, could you please make this issue less about trying to make these fiercely strong female athletes look like passive, male-gaze models and spend more time focusing on how talented these women are? Thanks.

Procter & Gamble: "The Best Job in the World" Ad

Procter & Gamble (P&G) is the company that makes A LOT of household supply brands: Tide, Gain, Downy, Bounce, Dawn, Bounty, Luvs, Charmin, Cascade, Swiffer, Mr. Clean, Duracell, and on and on and on. So in preparation for the Olympics they released this commercial which shows the mothers of Olympians with the tagline, "The hardest job in the world, is the best job in the world."

I love my mom and I'm sure a lot of you have similar feelings. But the problem with this ad is that it reinforces gender normative notions about parenting and the roles of women as mother figures. Thanks for washing my unitard, Mom! I couldn't have made it to the Olympics if you hadn't!

But more importantly this ad shows that mothers are meant to sit on the sidelines and cheer atletes on—i.e., good thing you procreated cuz you wouldn't have made it to the Olympics otherwise. Maybe this is getting a little too close to the "Having it All Debate" that you are all probably sick of, but there are a lot of female athletes competing that are mothers themselves. In fact, the 2012 U.S. Olympic includes 11 athletes that are mothers and 53 fathers. P&G, however, plays into the whole "self-sacrificing mother" trope that is used to glorify women and justify sexism by reinforcing the notion of women as primarily mother figures (with no fathers in sight—I guess they don't cheer on their kids?). If P&G is all about promoting family values, why couldn't they have celebrated the athletes in the Olympics that are parents instead? Or celebrated entire families and not just moms?

These ads are, sadly, likely indicators of what's to come once the Games commence on Friday. Seen any problematic Olympic ads? Tell us your thoughts in the comments!

*This piece originally referred to Abby Wambach as a "badass lesbian soccer heartthrob." She is certainly considered a heartthrob by many lesbians, but we didn't mean to imply that she herself is a lesbian since we don't know how she identifies.