As the rest of their party ducks the issue, four Democrats call for a ban on large-capacity magazine clips 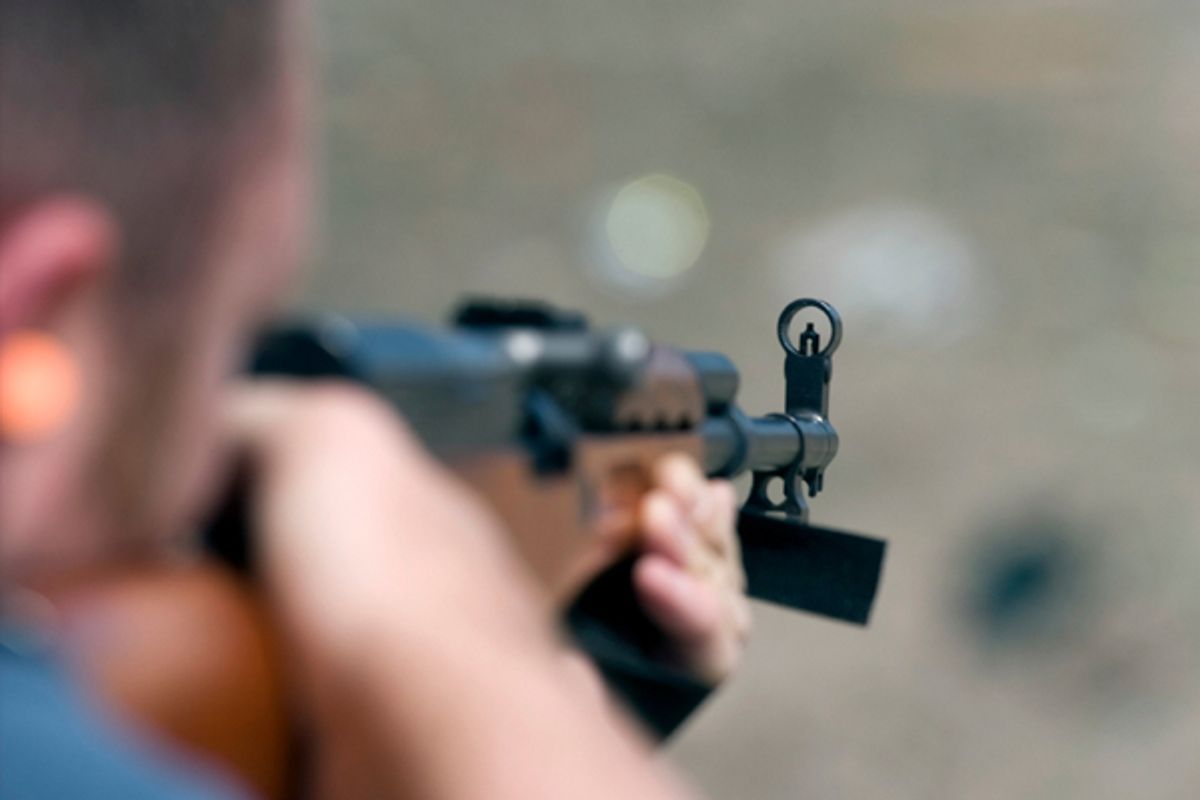 Four Democratic lawmakers faced reporters and TV cameras at a press conference in the Capitol today to push for “common-sense” gun control legislation in the wake of last week’s shooting in Colorado. New Jersey Sens. Frank Lautenberg and Bob Menendez, Colorado Rep. Diana DeGette and New York Rep. Carolyn McCarthy came out in support of Lautenberg's bill to ban large-capacity ammunition clips. Lautenberg said it was ludicrous that this kind of military-grade equipment is available to anyone, as they have zero hunting or recreational purpose and are clearly designed for killing people. He pointed out that nearly every major mass shooting in recent years has involved these kinds of magazines.

Menendez said that everyone respected Americans’ Second Amendment rights, but that there are limits to those rights, just are there are on First Amendment rights: “I’m a lawyer and one of the first things they teach you in law school is that we have freedom of speech, but you can’t yell ‘fire’ in a movie theater.” He said large-capacity magazine clips and high-powered assault rifles were a bridge too far. "You wouldn't shoot a deer with 100 bullets," he said, explaining there was no "reasonable" need for them. Menendez added that it was ridiculous that alleged shooter James Holmes was able to "build an arsenal with the click of a mouse," a reference to the fact that he purchased thousands of rounds of ammunition and tactical gear online.

DeGette, whose Denver district borders Aurora, noted that in the time she’s been in Congress since 1997, “there have been 23 moments of silence for those killed. And we’ll have another one this afternoon.”

Of course, the big question hanging over the push is, why bother? Republicans are certain to block any attempts to pass even the most modest and common-sense gun regulations like Lautenberg’s ban on high-capacity magazines, let alone a new Assault Weapons Ban, or closing the gun show loophole. Even Democrats are clearly less than eager to take the ball and run with it on gun control -- just four showed up today -- and they face an extremely formidable foe in the gun lobby.

Lautenberg pushed back against the “resignation to the futility of our mission,” saying it was the right thing to do and lawmakers must fight for it. Menendez acknowledged that it was unlikely they'd get something done today, but said that every major legislative accomplishment in this country has taken “years” and only succeeded thanks to dogged persistence in the face of certain defeat. "Years" seems to be the time frame for gun control too, at best, though trends have been moving the wrong way, lately.

Countering those who accuse advocates of politicizing the tragedy, DeGette said now is the “perfect opportunity to get something done,” because people understand the consequences of today's broken gun laws.

The four lawmakers were clearly wary of criticizing President Obama, who has suggested that he’s not interested in pushing any new gun laws. Instead, Menendez said he hoped Obama would join them in an effort to “marshal opinion” in favor of stricter laws.

McCarthy, whose husband and son were both shot on the Long Island Railroad in 1993, took the question personally. “You're basically asking, shouldn’t we all just give up?” she said to a reporter. “I don’t believe that and I don’t believe I would still be in Congress if I did.”

“I came to Congress on that one issue, to reduce gun violence,” she continued. “And I would love for this to be my last press conference ... but as long as I have a voice, I will fight on this issue.”