Why the farm bill is doomed (for now) 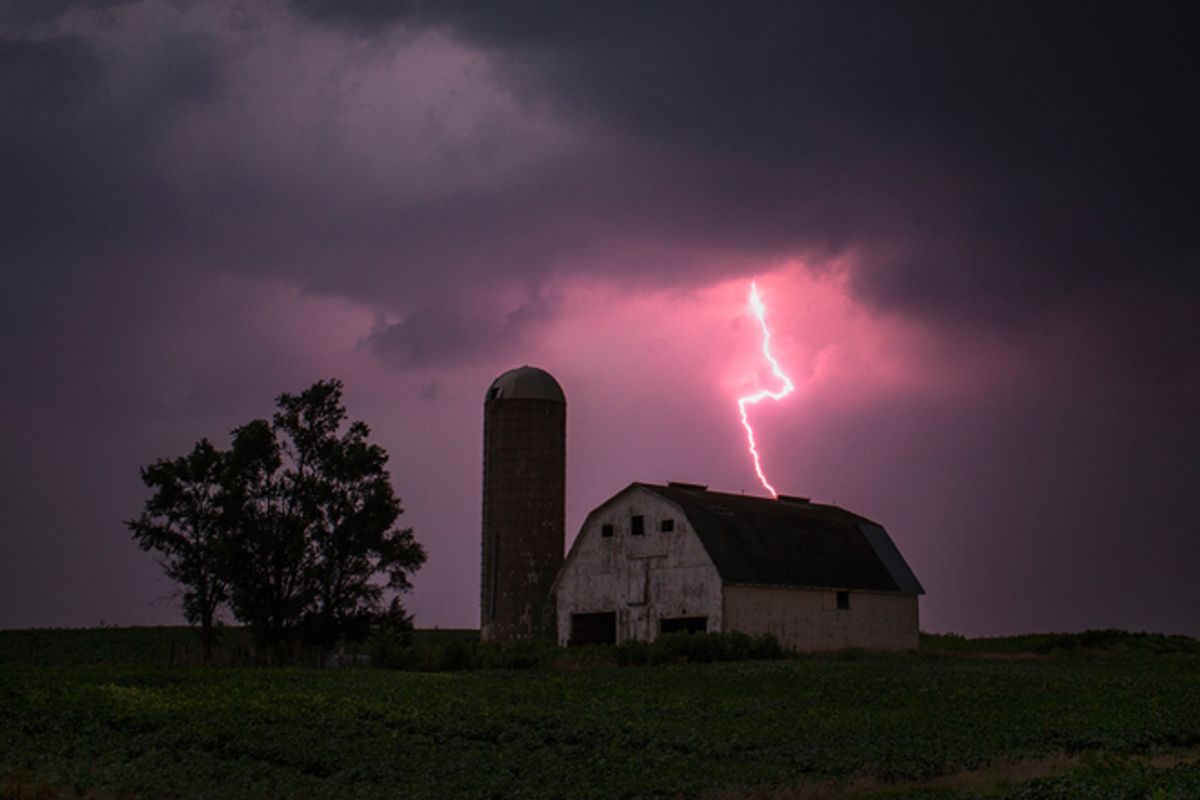 Lighting strikes over a barn surrounded by a soybean crop in Donnellson, Iowa, on July 13. (Reuters/Adrees Latif)
--

With U.S. farmers suffering through their worst drought in 50 years, you might think it would be a good time for Congress to pass a farm bill -- especially one that revivified agricultural disaster assistance programs that lapsed last September.

But you would be wrong. For a variety of reasons, including internecine GOP warfare between peanut and soybean special interests, along with a Tea Party-fueled jihad against the safety net, the farm bill, normally renewed by Congress with clockwork regularity every five years, is going nowhere. Despite the Senate having passed its own version, and a bipartisan vote in the House Agricultural Committee approving the House's version, Republican leaders appear to be in no hurry to move the bill to the floor before Congress goes on a month-long recess Aug. 3.

"Never before," reports David Rogers in Politico, "in modern times has a farm bill reported from the House Agriculture Committee been so blocked. Politico looked back at 50 years of farm bills and found nothing like this."

For some food activists, the temptation to say good riddance might be irresistible. The farm bill typically funnels huge government subsidies to the biggest monocrop farmers in the U.S. The Senate version of this year's bill actually cuts funding for conservation efforts and does little to support small, organic, "specialty crop" farmers who are particularly vulnerable to climate disruptions. Tea Party activists and Northern California foodies can find common ground here: Farm bill subsidies vastly distort the way agriculture operates in the United States, often steering millions of dollars to people who would be surviving quite fine without the handouts.

Indeed it is probably driving activists on both the left and right a little crazy that at exactly the moment when it seemed Congress was finally poised to cut some subsidies to the big farmers who have been raking in profits off of high commodity prices in recent years, the drought has slammed U.S. agriculture so hard that massive government help might actually be justified. Funny how that works.

But farm bill market inefficiencies don't quite explain why House Republicans are giving it the evil eye. There are two main issues.

First, there's a split among Republicans as to how exactly the subsidies should be handed out. The Senate version of the bill steers lucrative crop insurance subsidies to Midwestern soybean and corn producers. Southern peanut, cotton and rice farmers are crying foul. And in today's Congress, when the South whines, Washington gets hit by a tsunami. The uproar is an unexpected offshoot of the old Republican "Southern Strategy." The imposing  dominance of Southern Republicans, particularly in the House, is starting to skew government policy toward Bible Belt economic interests.

But probably even more important is the role of the farm bill in the U.S. social welfare safety net. Because, make no mistake, the farm bill is a crucial part of that net. The vast majority of the farm bill budget goes toward food stamps -- technically known as the Supplemental Nutrition Assistance Program. In 2008, about 67 percent of the farm bill's five-year $309 billion budget was slotted for nutrition assistance. But by 2010, in the wake of a recession-induced poverty spike, as much as 80 percent of farm bill spending went to various food stamp programs.

If you're a liberal, you probably think that feeding people during the worst economic crisis in 80 years is exactly the kind of thing that government is supposed to do. But you won't find many people who share that view in the House Republican caucus, and that's one very big reason why neither John Boehner nor Eric Cantor feels any urgency about moving the bill forward. Getting Southern peanut farmers a handout is worth debating -- but feeding the poor? Forget about it.