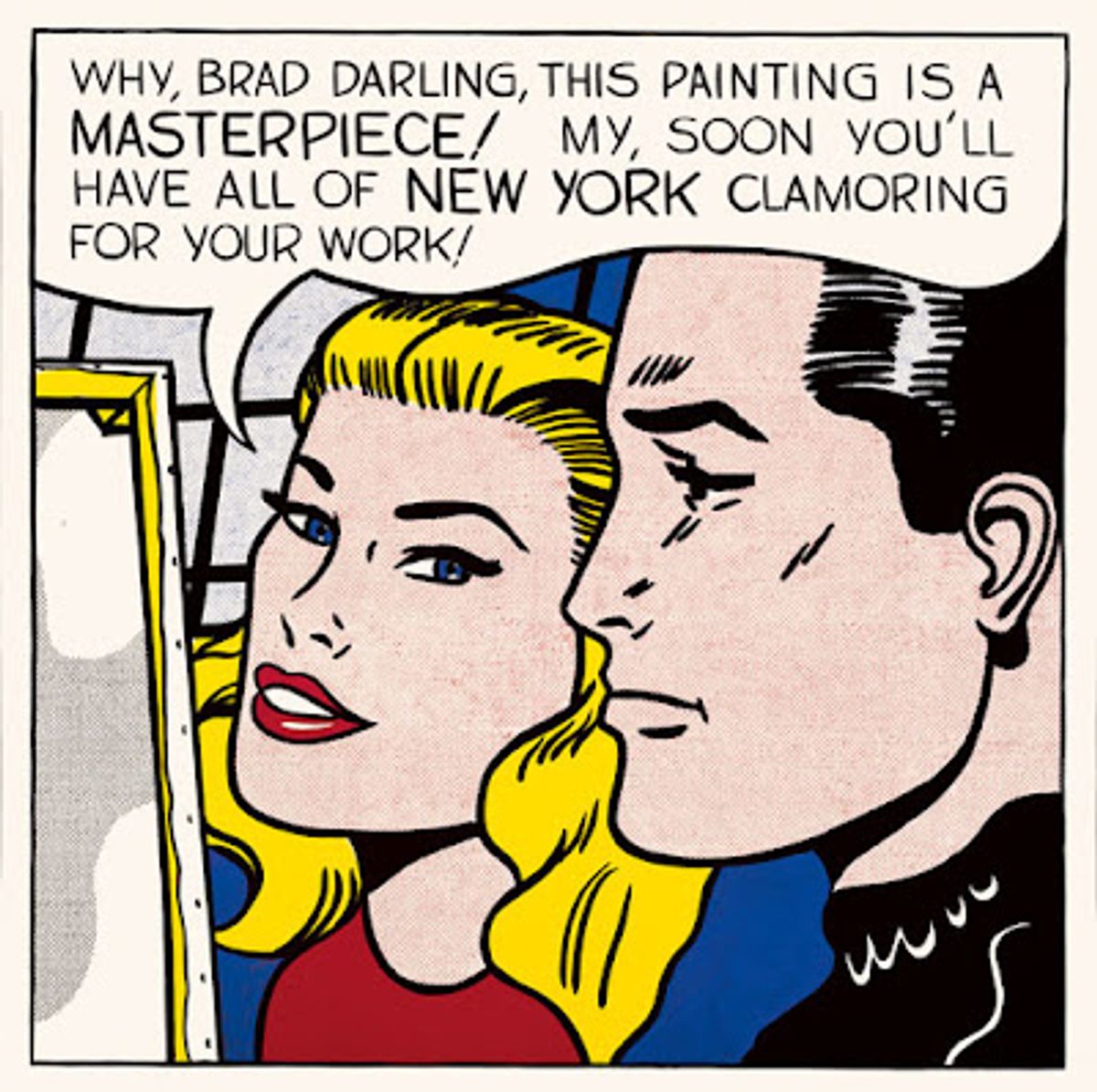 This article originally appeared on Critics at Large.

Viewing Roy Lichtenstein: A Retrospective now up at the Art Institute of Chicago through September 3, I had the distinct sense that Lichtenstein’s art has, in some sense, come full circle. The AIC has chosen to primarily advertise with the cartoon strip and ad-inspired paintings (distressed blondes, impossibly serene explosions) that make “Lichtenstein” and “Pop” seem synonymous, but which are only one subset of the artist’s prolific career, as a visit to the galleries reveals. This publicity choice is reasonable – these paintings, all from the 1960s, are iconic and captivating. But it raises this question: by being inundated with reproductions of Lichtenstein’s images until they resemble their slick source material, do we now see Lichtenstein’s paintings through that snazzy consumer lens? What lesson are we as viewers taking away from the retrospective if, drawn in by the AIC banners of stunned and stunning women, we take pictures of his comic strip beauties and make them the wallpaper on our iPhones?

Maybe the simple contours of his women meet a current desire for simplicity, something vaguely recession-related. But reproducing Lichtenstein in this way diminishes the power of the way he’s laboriously and shrewdly reworked these pop-culture images. This body of work, completed in the 1960s, blew open modern art by rejecting the premium placed on originality and instead taking advertisements and comic strip frames as his starting point. Lichtenstein tweaked them and repainted them on a larger-than-life scale, in a flat, droll style without commentary. He re-created the comic-book coloring technique of Ben-Day dots by hand – a laborious undertaking – and worked to conceal his brushstrokes. It’s important to separate a museum’s publicity department from curatorial, of course. This fetishizing of the comic book material goes beyond the ad campaign and museum store. It’s in evidence in the galleries, where, when I visited, a preponderance of young women in polka-dotted dresses (some even with cat-eye glasses or cherry-red lipstick) ogled Lichtenstein’s pretty women with their Ben-Day dot polka-dotted faces.

What is lacking in the elegant retrospective at the AIC is any evidence of the source material Lichtenstein used, a choice which deprives viewers of a full understanding of his working process. A selection of drawings (mostly preparatory) help, but they are segregated in a side room painted in a deep purple (the rest of the walls are white) as if to broadcast their difference. The problem is that, lacking this give-and-take between the artist’s working process and finished product, the exhibition becomes too stylish, inviting viewers to float along on pure surface.

I found myself thinking of Mad Men: its popularity and all the mixed messages that go along with its good-looking façade. Mad Men, of course, is about advertising men in the 1960s. It explores but also glamorizes the world that produced the material for Lichtenstein’s most famous paintings. The Mad Men full circle – from television show that allegedly tells us about another time to something we want in our own time – is exemplified by the simpering ad campaign that went along with the very successful Banana Republic Mad Men-inspired line.

What disquieted me about the image above is that it embraced the gender dynamic of the show’s world with a kind of visual shorthand (the confident man, studied by the adoring woman) as well as the style. Fashion is about taking on roles, it implies, and perhaps even misogyny is fun to try on for a little while. I’m relying here on Daniel Mendelsohn’s inspired take-down of the show in the New York Review of Books (Feb. 2011; after season 4), which also pinpoints why the show is so alluring. Watching stylish, emotionally stunted characters smoke and drink and torpedo their marriages, we get the double reward of living vicariously through them while feeling good that we are (surely) more enlightened. Mendelsohn goes on to say:

>In its glossy, semaphoric style, its tendency to invoke rather than unravel this or that issue, the way it uses a certain visual allure to blind rather than to enlighten, Mad Men is much like a successful advertisement itself. And yet as we know, the best ads tap into deep currents of emotion. As much as I disliked the show, I did find myself persisting. Why?

Glossiness, “the tendency to invoke rather than unravel”: much of Mendelsohn’s description of Mad Men stands true for Lichtenstein’s oeuvre as well. Yet for me there can be a sense of foreboding and even nausea to Lichtenstein’s ad-inspired images. With the prominent use of a shade-towards-sickly yellow, this isn’t the feel-good world of advertising.

A wall text in the Chicago exhibition calls Lichtenstein’s Hot Dog with Mustard “an idealized version,” but that’s not really it. With its rectangular bun of dense, smooth, straight-from-the-tube yellow, this may be the Platonic ideal of a hotdog, but that also makes it the least edible. While an advertisement would aim to accentuate and idealize the look of a hot dog to imply a perfect smell and taste, in his early paintings Lichtenstein uses advertisements as source material only to strip away the advertisements’ seductive allure. When it comes to his comic book-inspired paintings, Lichtenstein seems to be searching for moments that definitively eschew narrative depth. Again, as Mendhelson put it, he’s looking for “a certain visual allure to blind rather than enlighten.” It’s how this aesthetic obfuscation – not a blemish or brushstroke to be found – is  combined with generic but obscure bits of dialogue that makes the images of women and fighter pilots so hard to pin down. Another way of saying that Lichtenstein is interested in surface is to say that he is interested in texture: the pock-mark pattern of the Golf Ball, the tight, tidy whorls of the Ball of Twine, the oblique moments within prescribed social interaction.

There’s a question that halts casual viewers when it comes to a lot of modern and contemporary art. It’s actually more straightforward than “What does it mean?” It involves, simply, how the artworks should be viewed: with a smile and a wink, or with a straight face? It’s intimidating and discouraging not to know how to behave in museums. Or, more accurately, it’s distracting and counterproductive to feel like there is a certain way one should behave. It’s a question that I suspect many viewers are quietly asking themselves at the Lichtenstein retrospective. Lichtenstein’s style is all straight face, but his titles often include that smile or wink, like the concisely-named Takka Takka with its deliciously glib painted caption. I loved the beguiling painting Cold Shoulder, whose title confirms that the woman isn’t about to turn back towards us. In a gallery otherwise populated by open-faced, vacant women and heroic war imagery, we are finally denied the right to be blatant spectators.

The largest room in the exhibition is a long hall with the theme “Art History,” which includes paintings ranging from 1951 to 1990. Here, Lichtenstein playfully remakes classics of modern art (from Monet’s Haystacks to Mondrian) to fit the strictures of his own style. An inversion of the “Art History” riffs can be found in a 1973-1974 series on the theme of the artist’s studios. This cycle references paintings on the same subject by Picasso and Matisse. It also includes miniatures of Lichtenstein’s own paintings from earlier in his career, hung on the studio walls. “Artist’s Studios” explores creativity, but also narcissism. Lichtenstein is boldly self-referential, but also offers a gentle send-up of his own vocation. In one painting, Artist’s Studio, “Look Mickey,” Lichtenstein’s seminal pop painting featuring the famous mouse is hung decoratively above a couch and truncated by the canvas edge. Another memorable painting is the earlier Masterpiece. Here, Lichtenstein is lampooning the self-aggrandizing art world, not the woman.

The unconvincing note in the exhibition and accompanying catalog is the presentation of Lichtenstein’s controversial series of late nudes, dating from 1994 to his death in 1997. All these nudes are equipped with the same perky-plastic bodies shadowed with gigantic Ben-Day dots that look like rashes of various degrees of direness. (“He’s parodying himself,” I overheard one visitor say.) Art history is full of bad nudes by great artists: bad because they are caricatures of women, and interesting because they are caricatures of the artists’ work. What’s disappointing in the AIC retrospective and accompanying catalog is that, instead of exploring what makes the paintings controversial, the curators seem more intent on being apologists for the late nudes. The wall text is glowing, and the catalog essay plays it safe by endlessly comparing them to Picassos. This approach just makes the paintings, already weird, also appear bland.

Lichtenstein’s late nudes only come alive if you see them as problematic: they are transfixing and even rewarding to the extent that they embrace the extremes of artifice. They are to real women as the rectangular, yellow square of Lichtenstein’s hot dog bun is to food. Neither offers nourishment, but both give a window into lived experience by presenting its opposite, the key being the handmade laboriousness of Lichtenstein’s cool, handsome obfuscation.

Anna-Claire Stinebring is a reviews editor at Full Stop. She studies art history at the Williams College Graduate Program.

Anna-Claire Stinebring is a reviews editor at Full Stop. She studies art history at the Williams College Graduate Program.