He tells the British their Olympics planning isn't up to snuff, the latest in a string of bizarre, entitled insults 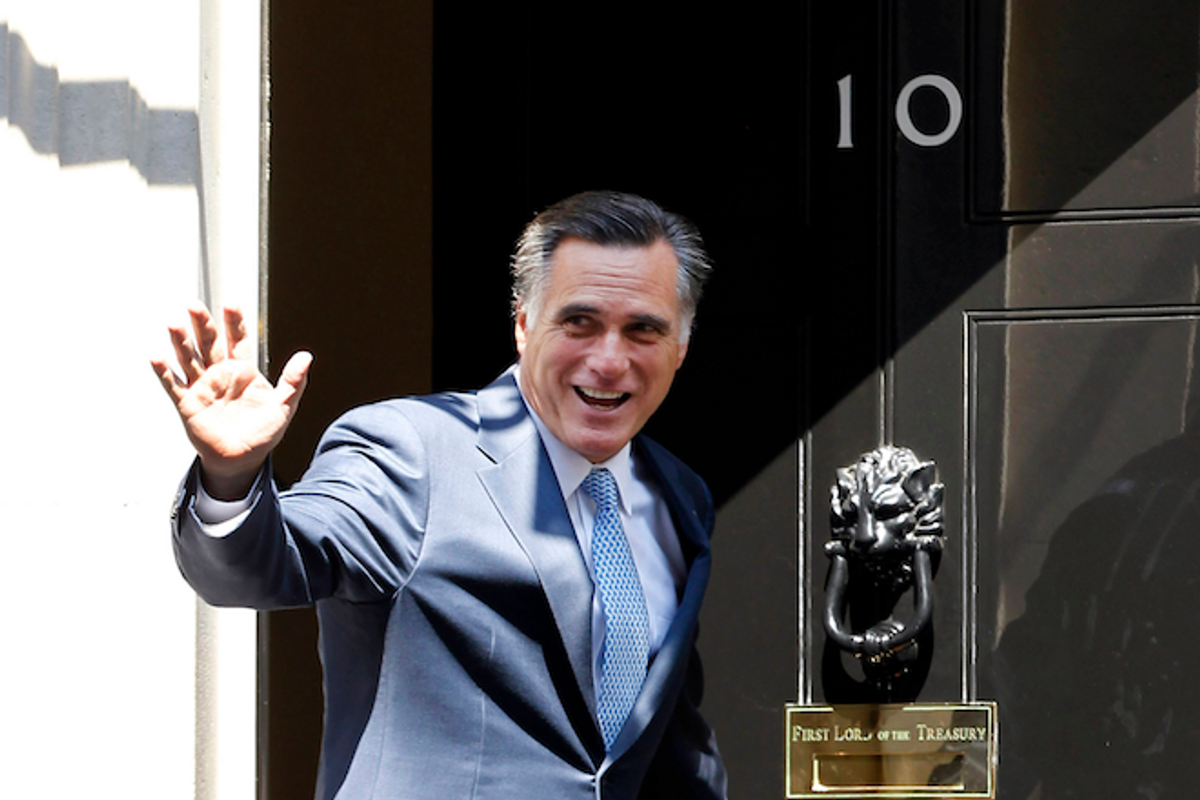 Maybe he was just trying to make up for his adviser hyping his "Anglo-Saxon heritage." On Thursday, rather than displaying his affinity for the British, Mitt Romney insulted them by questioning the professionalism of their Olympics planning.

"It's hard to know just how well it will turn out. There are a few things that were disconcerting," he told NBC's Brian Williams. "The stories about the private security firm not having enough people, the supposed strike of the immigration and customs officials, that obviously is not something which is encouraging." The British press was unamused. The Telegraph’s website screamed: “Olympics: David Cameron rejects Mitt Romney’s suggestion Britain is not ready," while The Times of London headlined the story "PM rebuffs Romney over readiness for Olympics."

Cameron himself told reporters: “This is a time of some economic difficulty for the UK, but look at what we are capable of achieving as a nation even at a difficult economic time,” he said. “I think we will show the whole world not just that we come together as a United Kingdom but also we’re extremely good at welcoming people from across the world."

Clearly, the same can't be said for Romney.

"I will obviously make those points to Mitt Romney," Cameron added. "I look forward to meeting him."

I bet. Way to keep that "special relationship" special, Mitt.

I've called Romney "gaffe-tastic" before, but I found myself shocked by his tone-deaf, condescending remarks in London. I mean, we expect it in this country. Romney's Olympics gaffe made me think about when, campaigning in Pittsburgh, the candidate insulted a local bakery by disdaining its baked goods. "I'm not sure about these cookies. They don't look like you made them," Romney said to the woman next to him. "No, no. They came from the local 7/11 bakery, or whatever." In fact they came from the local Bethel Bakery, whose owner later told MSNBC's Lawrence O'Donnell he was offended by Romney's remarks.

Or when he visited the Daytona Raceway in Florida during a rainstorm and insulted fans wearing plastic ponchos. "I like those fancy raincoats you bought," he said. “Really sprung for the big bucks." Bill O'Reilly later suggested Romney's comment sounded "elitist," to which Romney replied he'd just wanted to wear a "garbage bag," too. And while we're on the NASCAR topic: Romney was also asked if he followed the sport. “Not as closely as some of the most ardent fans, but I have some great friends who are NASCAR team owners,” Romney responded.

Or how about the time he talked to unemployed voters while campaigning in Florida last year, and told them, "I should tell my story. I'm also unemployed." (Romney's estimated tax returns showed his net worth at nearly $250 billion in 2011.) Or the other time he commiserated with the unemployed and economically insecure by saying, "There were a couple of times I wondered whether I was going to get a pink slip."

Then there's that bizarre interlude with black voters in Jacksonville, Fla., during the 2008 campaign, where he broke out into "Who Let the Dogs Out?" and remarked on a child's necklace with "bling, bling, baby!" (Maybe that one doesn't count, because it's hard to argue Romney was sincerely courting black voters.)

You can find these kinds of baffling, insulting gaffes going all the way back to his first Senate run, when he tried to charm a woman voter in Waltham, Mass., who was reluctant to shake his hand. "I know, you haven't got your makeup on yet, right?" he told her, awkwardly adding, "You do, you do."

What accounts for Romney's capacity to consistently insult even those he's trying to court? I'd argue it's his fantastic sense of entitlement, with its accompanying inability to feel empathy for the less fortunate. It may or may not be connected to his pranking/bullying impulse, which showed itself in his school days when he forcefully cut the hair of a gay classmate, led a sight-impaired teacher into a closed door, or intimidated friends by impersonating a state trooper. Romney clearly lacks the ability to put himself in the shoes of others (except other wealthy business owners). That's a bad trait on the campaign trail, but when it extends to the leaders of other sovereign nations, it's a terrible trait in a president.

Why is this race close?