A woman's death in Chicago is a new flashpoint in the abortion wars. But the right is once again ignoring the facts 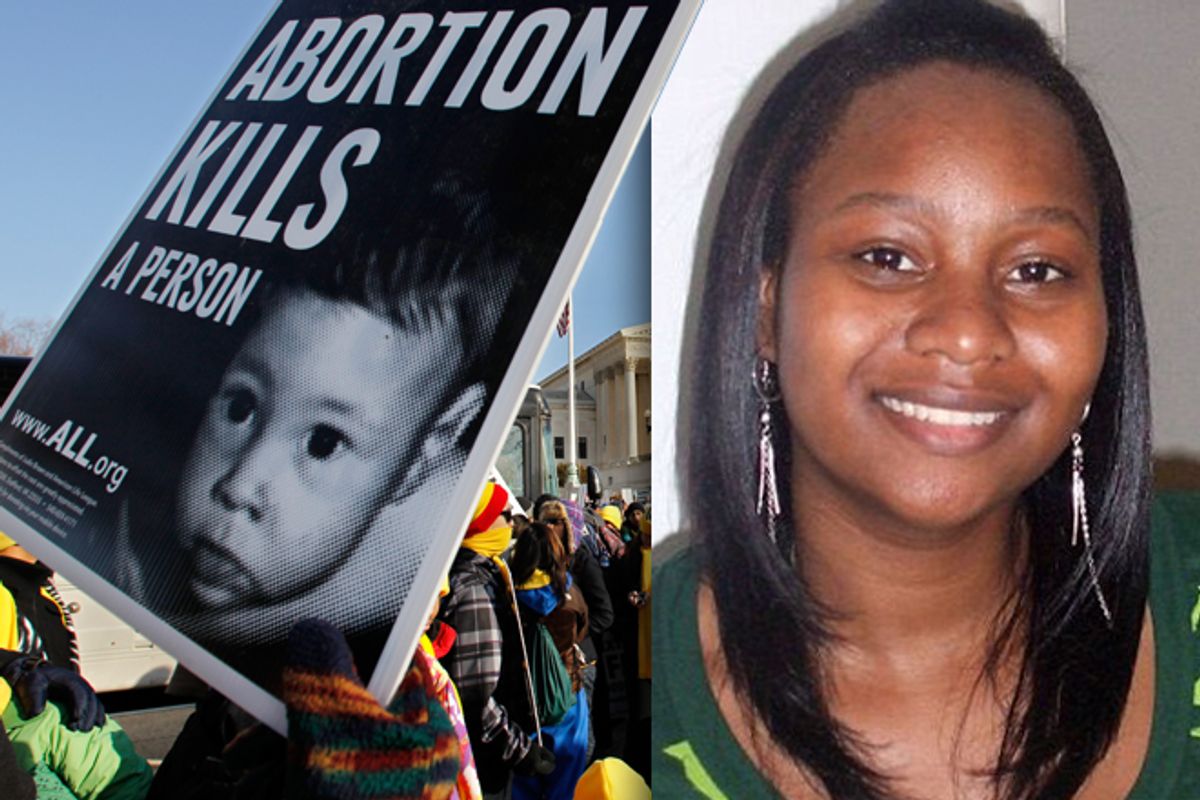 Her name was Tonya Reaves; she was 24, from Chicago and pregnant. Last Friday, she died of a hemorrhage at Northwestern Memorial Hospital. Because her death, ruled an accident, occurred hours after she had an abortion at Planned Parenthood and was rushed to the hospital, it was almost instantly seized upon by opponents of abortion rights as an example of the dangers of abortion. That’s despite the fact that, according to the most recent data, a woman is 14 times more likely to die in childbirth than from abortion-related causes.

On Tuesday, Cliff Stearns, the Republican congressman from Florida who is already attempting to bring down Planned Parenthood via investigation, told Fox News, "I would like to put them under oath. I would like to find out how they spend our half a billion dollars, and I would also like to explore some of the safety aspects, particularly in light of this death, of this tragedy." When, the same day, Barack Obama reiterated his support for Planned Parenthood on the campaign trail – “Mr. Romney wants to get rid of funding for Planned Parenthood. I think that’s a bad idea. I’ve got two daughters. I want them to control their own healthcare choices” – Operation Rescue saw an opening that involved exploiting a woman’s death and racial politics.

Troy Newman, the group’s president, told LifeNews that the president had “disrespected Tonya,” adding, “We have to wonder how Mr. Obama would have felt if that had been Malia or Sasha bleeding to death on that abortion table.” Then he threw in Trayvon Martin for good measure: “Apparently for Mr. Obama, a black man who is killed by a white man is worthy of justice, but a black woman killed by a campaign contributor is something that we should give no regard.”

According to the Illinois Maternal and Child Health Coalition, during the most recent five years (2000-2004) for which there is data, 27 black women in Illinois died of pregnancy-related causes, a period in which only one white woman died of the same causes. So far as I could learn, no one called a national investigation into their tragic deaths or made them into a campaign issue.

Planned Parenthood issued a statement saying, “While legal abortion services in the United States have a very high safety record, a tragedy such as this is devastating to loved ones and we offer our deepest sympathies.” Reaves’ family has hired a lawyer with the intention of finding out what happened after the cervical dilation and evacuation – a term that generally denotes a rarer, second-trimester abortion – and whether Planned Parenthood or Northwestern Memorial could be held responsible.

Oddly, the ABC News report about the case took the time to interview two doctors, who correctly pointed out how rare abortion-related deaths are, but left as conjecture the following statement from one of them: "It probably happens less often than people dying just having full-term childbirth.”

A study published in February in Obstetrics and Gynecology drawing on CDC data and Guttmacher Institute surveys concludes, “The pregnancy-associated mortality rate among women who delivered live neonates was 8.8 deaths per 100,000 live births. The mortality rate related to induced abortion was 0.6 deaths per 100,000 abortions.” While there may be some underreporting on either side, that’s a pretty dramatic difference. (Guttmacher says that “fewer than 0.3 percent of abortion patients experience a complication that requires hospitalization.”)

One of that study’s co-authors, David Grimes, told me this week, “Childbirth remains much riskier; that has been the case since the CDC started gathering data on it.” He says the ratio has been growing: “Abortion has gotten very safe, and childbirth remains quite risky still.”

And those figures are just counting the pregnancies that end in childbirth or termination. Grimes co-authored another study, in 2006, that looked at pregnancy-related deaths in general. It found that abortion and miscarriage together were "associated with the lowest risk, live birth intermediate risk, and ectopic pregnancy and fetal death the highest risk" to a pregnant woman's life.

According to the most recent estimates from the World Health Organization, unsafe abortion, largely in countries where the procedure is illegal for "pro-life" reasons, accounts for 47,000 women's deaths annually. And, of course, there's a reason the coat hanger is iconic in the United States. Before New York state decriminalized abortion in 1970, a quarter of childbirth-related deaths among white women in New York City in the early 1960s were due to abortion. Among women of color, the figure was one in two. A more recent example of the impact of legal abortion services on reducing death comes from Romania, which banned abortion in 1966. During the two decades that abortion was illegal, abortion-related mortality shot up sevenfold, to 148 deaths per 100,000 live births. In 1989, the ban was lifted; by 2002, the mortality rate was nine deaths per 100,000 births.

None of this will comfort the Reaves family, of course. And no amount of evidence will stop conservatives from using her death for baseless political posturing that ultimately shows a profound contempt for women's actual lives and safety.