When the fires came for us

I thought our home in Colorado was safe. But as flames devoured the state, we found ourselves in a national tragedy 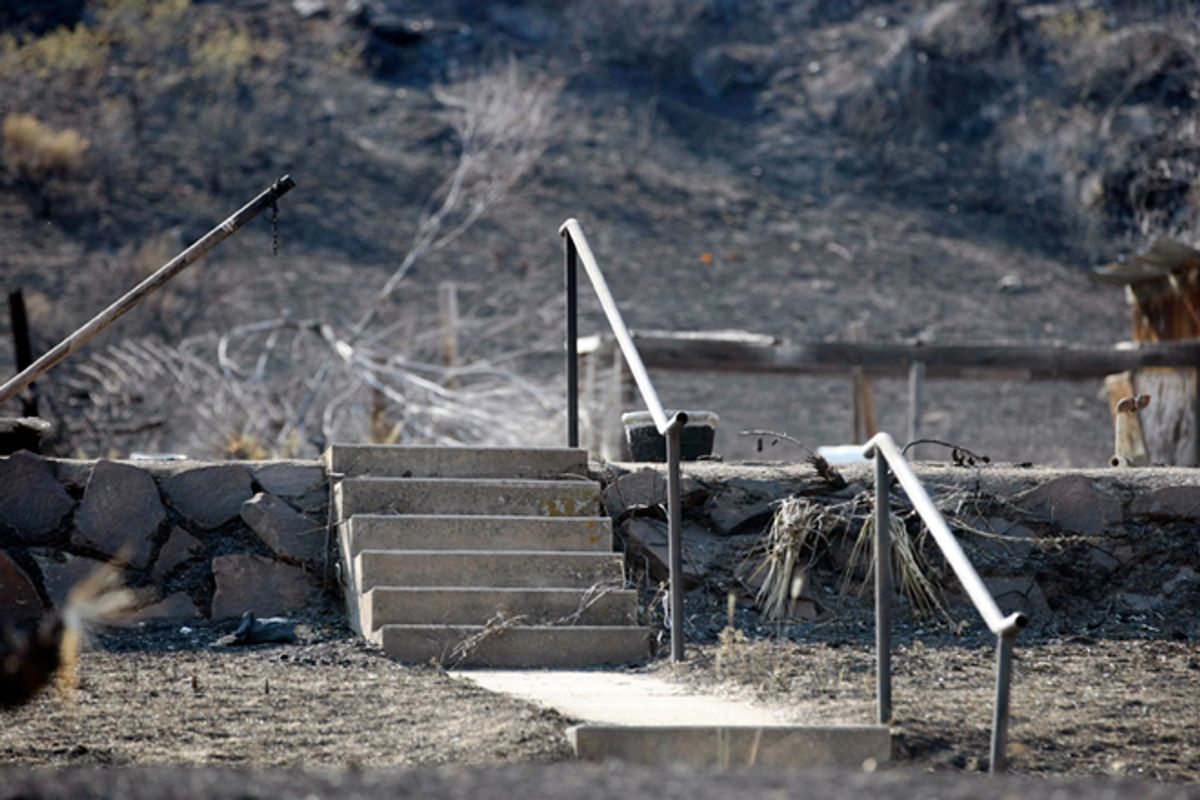 The stairs of a home that was completely destroyed in the High Park fire near Fort Collins, Colo. (Reuters/Rick Wilking)
--

Pets, passports, photos: That’s what we took when we evacuated in the dark, the glowing rubble of fire being swept at us with a huge broom of wind that was collecting debris into our corner of the planet. At 3 a.m., the reverse 9-1-1 had come, the officer had pounded and yelled his get out, it’s right there, and we could see the fire ourselves. We were moving fast and yet, for a second, I stopped barefoot on the wooden floor to observe the dissonance of my thoughts, turning from but it will never get here to but here it is.

This wildfire, which had started so far away, was now cresting the closest foothill, was coming out of the forest and into farmland. Impossible. We didn’t live deep in Colorado’s mountains for this very reason. We lived in the valley below the mountains, in a stretch of green irrigated pastureland and farms – a type of landscape more to our aesthetic and also out of the way of such calamity. And yet, this glowing ball.

How can the world shift so? The winds, the fire, my thoughts, our life?

Then I was caught up in movement again. My husband starting the sprinkler system, my kids gathering their backpacks, me gathering the last armload of mementos. Chickens were caught and plunked, uncaged, into the car. They stood on the car seat, bokking, climbing over the golden retriever and the cockatiels and boxes of diaries and photos. We piled in and drove away, silent, police lights flashing in the dark, shifting from red to blue, red to blue.

My parents’ ranch is nearby, and by the time we arrived, other evacuees were already congregating in the lighted kitchen. Their animals were being unloaded, too: a blind horse, donkeys, dogs. My mother made coffee; my father stood at the window watching the plumes of smoke, confused not only by his Alzheimer’s but by this sudden onslaught.

The sun rose; the sky lit. The winds continued to storm, huge plumes of smoke swirled, ash sifted onto our cars and into our lungs. Sirens rang out all morning; helicopters and tankers filled the air taking water from the lake to the fire. I felt seasick with confusion: Flee? Stick to home ground? I felt shifted apart; my bones and tendons and cells all slightly altered and too loosely strung together. Suddenly this was our tragedy, and the ever-present newest calamity on the news was mine, and I couldn’t watch it with the semi-disinterested ah, too bad for those people, because there was no such protective thought to go to; no knowledge that it was them, and not me.

In the days following, surprising things shifted. Hummingbirds, for instance, appeared everywhere, driven down from the mountains. Deer, elk, bear, moose all appeared in town. Then, too, the fire shifted, first away from our home, then toward. We studied perimeter maps from my parents’ kitchen table: The fire was within two miles, then one, then a half. Then we started counting in yards. Emotions shifted. These forests needed to burn, devastated as they are by the pine beetle. But a calmer fire would be better; a fire that could be controlled; a fire that wasn’t gobbling up people’s homes.

Some were furious: the lack of prescribed burns, the lack of preparedness plan, the small initial response to the initial lightning strike. And yet, simultaneously, there was awe and joy: for the individual heroes, for the tanker pilots’ skill. Joy for one person’s luck, sorrow at another’s loss. Even the status shifted: Our fire was declared the worst in Colorado’s history, but then another took that dubious honor.

But the biggest shift occurred in my body, and it was painful – the real, tangible, excruciating anxiety that occurs when you can no longer self-guard, self-protect. With those comments like, Poor Easterners, how hot, how awful. Where’s my cup of coffee? There was no off-switch, no safer ground. I was stuck, facing the tragedy face on. The guy at the post office, for example, standing in line with me to get our undeliverable mail, who stared at me blankly and simply said that his home was gone, just gone, and that he had no insurance. And I thought: We humans can’t truly embrace every horror, or else we’d be submerged in a nanosecond by the unspeakable suffering that this world offers. But at times like this, it does just that. Embrace the unspeakable suffering that is everyone, including starving children half a world away. Suddenly it was all in my heart, there in line at the post office. As much as I asked my mind to send me on a tangent, it simply would not. It could not, or it would not. It just left me hanging there, raw and open, gasping for breath.

When we were allowed to return home, we found a silent house coated with ash and dust, surrounded by burned pasturelands. We were quiet, as if our talk would shatter the tentative fire line – the fire was still burning, after all, and would be for weeks. But we started to right ourselves again. The kids painted THANK YOU HEROES on plywood for the firefighters going by. We unpacked, we cleaned. We let our minds recoat themselves with protective tangents. When the heat wave continued on the East Coast, I closed my eyes and let strangers’ difficulties penetrate. And I opened my eyes, and stopped. It is their catastrophe, not mine. How can I deal with both?

Perhaps it is the limitation of the heart that saves the heart, and it is the piercing that loosens, a little, what those limitations are. This fire has shifted my own protective coating, of that I am sure. I only worry, and wonder, how much.

Laura Pritchett is the author/editor of six books. Her fiction includes the novel "Sky Bridge" and "Hell's Bottom, Colorado." Her work has been published in many magazines, including The Sun, Orion, 5280, High Country News, High Desert Journal, OnEarth, Elle and others. She has received numerous awards, including the PEN USA Award, the Colorado Book Award, and the Milkweed National Fiction Prize. More at www.laurapritchett.com.