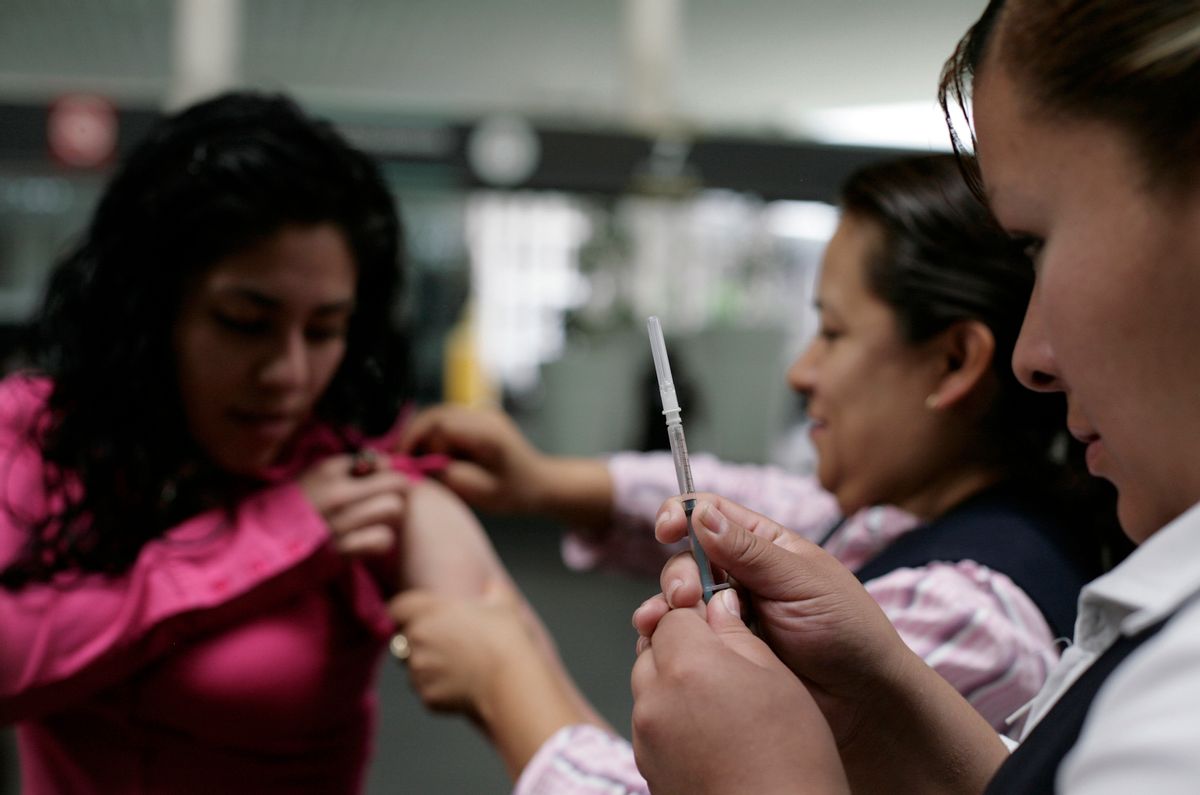 Health workers prepare a passenger for a vaccination against measles at the Benito Juarez international airport in Mexico City. (Reuters)
--

In our post 9/11 world, events like the Olympics carry the extra burden of keeping spectators safe from acts of violence. Visitors to London will no doubt see police toting submachine guns and be captured by surveillance cameras at every turn. While anti-terrorism has dominated conversations on the eve of the games, there’s a less-discussed hazard for travelers -- and the rest of us. In 2011, Europe reported over 30,000 cases of measles. Third-world levels of infection on a first-world continent are worrisome. It’s worth considering whether folks stepping foot in Great Britain should carry a copy of their vaccine records with their passport to earn safe passage into the country.

We don’t know how many measles cases were due to parents who refused to vaccinate their kids. We do know that the cases can be attributed to broad swaths of people who are not vaccinated against measles. We also know that the bogus claim that the measles-mumps-rubella vaccine (MMR) causes autism got its start in Europe. Most important, we know that the world is flat: 2011 also saw the largest outbreak of measles in the U.S. since the mid-1990s. Over 90 percent of our cases were imported here from locations around the world. Some of those cases were, unfortunately, kids who were too young to receive either one or both doses of the MMR vaccine. But of those infected kids who could get the vaccine, three out of four did not because their parents refused it.

All of this makes us ask, yet again: Despite the breadth of medical, legal and ethical evidence speaking to the safety of vaccines, why does the anti-vaccine movement continue to wield so much influence over parents?

But before getting to that, it’s worth putting the problem in perspective. Anti-vaccinationists have been around since the birth of immunizations. What’s striking is how little has changed in their attempts to damage the reputation of vaccines. Paul Offit shows this in his book “Deadly Choices: How the Anti-Vaccine Movement Threatens Us All.” After the discovery of the smallpox vaccine during the 1880s, anti-vaccinationists seized upon the fears of a less secular society by claiming the vaccine contained the “poison of adders, the blood, entrails and excretions of bats, toads and suckling whelps.” Today, in a society more accustomed to clinical jargon, they focus fear tactics on the real compounds used to keep us safe and known to be effective, like thimerosal.

Another past theme that resonates today is that vaccines are part of a conspiracy by the medical establishment to make money. Seth Mnookin alludes to this argument in his 2011 book about the anti-vaccine movement,“The Panic Virus.” Take the following statement, circa 1906: “The salaries of public health officials reach the sum of $14,000,000 annually ... without smallpox scares their trade would languish ... vaccine “farmers” represent a capital of $20,000,000, invested in their foul business.” You could easily substitute a few words and numbers to make the same accusation about modern medicine.

In more recent years, anti-vaccinationists have masterfully leveraged our obsession with media and celebrity to advance their agenda. Andrew Wakefield, the physician whose bogus research purported the link between autism and the MMR vaccine, was a charismatic figure. The British press seized upon him to sell copy and British TV turned his story into a movie of the week. Closer to home, we’re enamored and influenced by more typical entertainment figures. Jenny McCarthy is the most often cited celebrity-turned-anti-vaccinationist. More recently, we’ve seen Rob Schneider jump on the bandwagon with an interview he gave to a local California news station. While others have done a good job of dissecting the litany of errors in Schneider’s rant, he’s just the latest celebrity to shovel vaccine myths. And celebrities don’t just lend their faces and voice to the anti-vaccine movement. Sometimes, they get far enough to influence public policy. In 2008, actor Jim Carrey, McCarthy’s former boyfriend, heard an innovative plan in New Mexico to offer immunizations to kids at a movie theater that was playing one of his movies, “Horton Hears a Who.” Carrey, then in the throes of an anti-vaccine phase, picked up the phone and put a stop to it. (The state was able to successfully gets kids vaccinated at the movies by linking its campaign with a Bob the Builder film instead.)

Another major outlet of the anti-vaccine movement is the fast, free and unfiltered universe of social media.  The Huffington Post is a popular sanctuary for anti-vaccinationists to reach a wide audience. Bloggers there include McCarthy, Carrey, author David Kirby, as well as physicians like Bob Sears. These “experts” can put their weight behind the anti-vaccine movement without a single edit or scrutiny of their sources.  Wakefield, now a pariah among doctors, continues to tweet directly to anybody who will follow him.

If success equals fear, doubt and uncertainty on the part of parents, the anti-vaccine movement has achieved some measurable results. Studies show that anti-immunization myths are leading parents to question whether to vaccinate at all, or to choose arbitrary alternative schedules that, by spreading shots out over a longer time, just increase the chances kids will go unvaccinated.

Perhaps it’s to the credit of anti-vaccinationists that, like a virus, they’re able to mutate to fit the times. On the other hand, it’s doctors and other public health officials who have the harder task: finding truth behind their shifty arguments. Like all good research, this has taken a lot of time, patience and healthcare dollars.  Slowly but surely, we’ve peeled back that anti-vaccine onion to prove the safety of shots and the preservatives that help them work.  But while the studies pile up, the discontent with vaccines continues to fester -- and diseases like measles make a comeback.

This is where communication comes in -- and we, the medical community, seem to need a lot of help.  Doctors, by our nature, are trained in language that is complex and a style of communication that emphasizes rationality and restraint. This the exact opposite of the emotion that goes through the hearts of parents who just want to protect their child and do the right thing. We need some emotional vigor to complement our scientific rigor.

So it’s an absolute lie that has killed thousands of kids. Because the mothers who heard that lie, many of them didn’t have their kids take either pertussis or measles vaccine, and their children are dead today. And so the people who go and engage in those anti-vaccine efforts --  you know, they, they kill children. It’s a very sad thing, because these vaccines are important.

Perhaps the best advocates for vaccines are those whose lives have been altered by a vaccine-preventable illness. In 2008, Megan Campbell’s infant son was exposed to measles in their doctor’s waiting room by a child of vaccine-refusers who contracted the disease while on holiday in Switzerland. “We spent three days in the hospital fearing we might lose our baby boy. He couldn’t drink or eat ... and seemed to be wasting away.  When he began to be able to eat and drink again we got to take him home.” At home, the child spiked fevers to 106 degrees. “We spent a week waking at all hours to stay on schedule with fever reducing medications and soothing him with damp cloths.” Luckily, Campbell’s son recovered, but she articulates the issue with more punch than any doctor or celebrity can: “People who choose not to vaccinate their children actually make a choice for other children and put them at risk.”

Efforts that blend science with some emotion can help reinforce what we know: Vaccines are safe and effective. Yes, they have side effects, and your doctor should help you understand them, but autism and other neurological disorders are not among them. Please vaccinate yourself and your children -- whether you’ll be experiencing the Olympics in person or in the comfort of your living room.