I've always bruised easily, but I never knew that I had a bleeding disorder 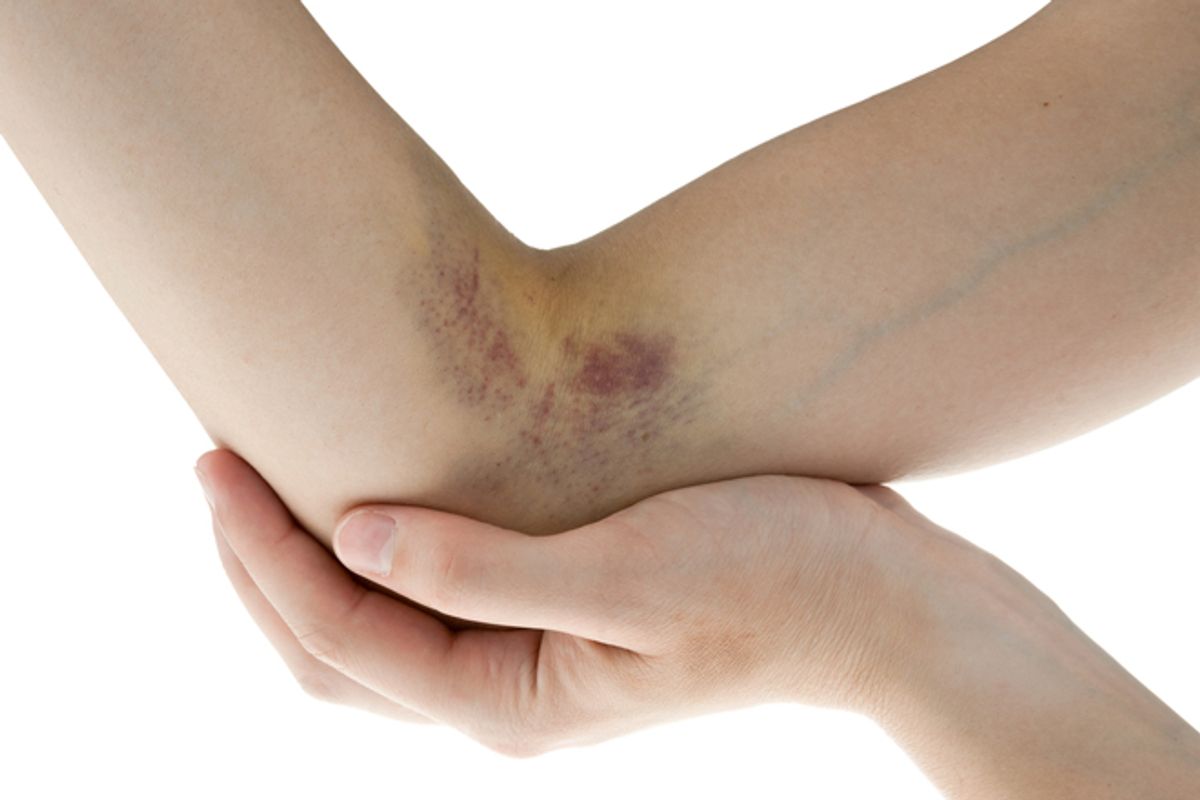 The bruises on my skin are as immediately recognizable as the brown of my irises or the mole on my left cheek.  At any given time, my legs will be speckled with small marks of varying severity -- a purple patch from a run-in with my desk, a bluish blotch on my thigh from carrying my bicycle up the basement stairs. The thin, white skin on the underside of my arms needs little prompting to blossom into maroon-hued circles. I am so accustomed to the constant presence of bruises that I find myself surprised by the concerned faces of friends and acquaintances asking, “How did you do that to yourself?!” More often than not, I have no idea where the mark may have come from.

Sometimes I do and will offer the story when questioned. Take, for instance, my most recent act of commuter defiance, when I shoved my right arm into the fast-closing doors of a subway car. “Hell no,” I remember thinking. “I am not missing this one.” The doors slammed on my bicep, and I gritted my teeth, pushing until they relented and slid open. I stumbled into the full car and assumed a look of nonchalance, daring anyone to comment. Rubbing my upper arm, I felt the lump that had formed almost instantly. “Yeah, that’s gonna be a good one.”

Excessive bruising as a child is, understandably, a somewhat disconcerting phenomenon. Sure, kids fall down and play rough, but there was always a noticeable difference in the way I contused. “You’re all black and blue! You bruise like a banana! Like a peach!” are all descriptors I’ve heard repeatedly. What could I say to that? I’d shrug and smile, rolling my eyes when someone poked me lightly to see if it would leave a mark.

Thanks to my bruises, I had to speak to a police officer at age 4 during day camp at my local Jewish Community Center. I remember having my shirt lifted as the man pointed to little spots on my stomach and chest. “Where did that come from?” he asked. I didn’t know; I barely noticed them. He tried another, “How about that one?”

I still find this encounter pretty absurd. Anyone who has met my parents knows that they’re the last people to hit a child. My mom was significantly less amused, particularly when a family friend called the house afterward pretending to be child services. No one felt the need to involve the authorities on my behalf again (thankfully), but the comments followed me into adult life (“Is your boyfriend beating you up? Did you get in a fight?”).

At 22, I was diagnosed with von Willebrand disease (VWD), a congenital bleeding disorder that results from a deficiency of von Willebrand factor, a mega protein produced in the bone marrow that helps platelets clump together and attach to blood vessel walls. This is required for normal clotting. Excessive bruising is a symptom, and if you’re female, so are heavy menstrual periods.

I had undergone a relatively routine gynecological procedure and a week later, I started bleeding. I was in Southern California for a wedding shower, dressed up and blow-dried, wearing an excited smile as I attempted to ignore the blood gushing out of my body. Twelve hours went by, and the bleeding intensified. I called my doctor’s office; after the gynecologist on call asked me about my bleeding rate, she calmly told me to go to the emergency room. Instead, I lay down in a hotel room, hoping a horizontal position would slow things down. The bleeding continued, but I wanted to go home, so I got on my flight back to San Francisco, running from security to the bathroom to quickly peel off my blood-soaked jeans. I put on a dress. After a 50-minute delay, we landed, and I finally went to the emergency room.

The next 24 hours were a blur as I became increasingly anemic. The emergency room doctor couldn’t seem to stop the bleeding, and the on-call gynecologist from my doctor’s office was called in. She abruptly stuffed me with an enormous amount of gauze. In shock, pain, and severe dehydration, I blacked out. A few hours later, I attempted to stand and blacked out again.

The doctor wanted to move me to another hospital but would not let me get in my father’s car if I couldn’t stand up. I was put in an ambulance and chatted with one of the medics about bars in my San Francisco neighborhood. I was hooked up to fluids and the gauze was removed. The bleeding had stopped, mercifully, although my blood counts would need repeated testing. Multiple veins had blown out, but I would be OK. My good friend and mother joined me to watch the finale of "The Bachelor" (being anemic wasn’t going to stop my trashy television addiction), and a friendly young nurse darted in and out of my hospital room looking for updates -- on the show, not my condition. At 11:55 p.m., I was sent home, spared from another night in the hospital.

The next week, my color alternated between various shades of gray and white, and I tried as best I could to explain to my male co-workers that an artery in my cervix had been exposed without actually using the word "cervix."

I fainted at work. I fainted at Whole Foods. I found myself unable to stay warm. Lying down still resulted in my head pounding loudly as my pulse worked overtime to pump such a small amount of blood around my body. Moving was worse. I wasn’t too bothered by the constant blood talk that ensued, in part because I was half-catatonic. I went back to the hospital, where I was told in soothing tones that my blood levels were “dangerously low.” I was scheduled for a blood transfusion. I felt the crazy sensation of color returning to my cheeks, energy to my body, as two units of B+ were pumped into my arm. It wasn't until I visited a hematologist that I learned the nature of my condition.

How could it have possibly taken so long for my doctors to figure out that maybe something was abnormal?  How had I never heard of VWD until now? I felt sorry for myself as my parents treated me like an invalid, wanting nothing more than to return to my apartment and to work. And within days, I did. I chose not to dwell on the fear and anger too long. Instead, I informed my roommates that I was required to eat red meat to replenish my iron stores, so we should probably plan a barbecue.

What else could I do? Lay blame on my parents, my doctors and myself for not taking my bruises seriously? I felt more betrayed by my body than anything else and ostensibly, my ordeal was over. I'd never have to go through anything like that again, and the aberrations from years past -- the bloody noses, bleeding gums, terribly heavy periods -- suddenly made sense.

Now I’m forced to see my bruises with a greater understanding, even if I may not want to. I’m bleeding under my skin, and this is happening because I have a deficiency of von Willebrand factor in my bone marrow. This will result in a mark that will first turn a bright blue, then purple, then a swampy yellow-green. When asked why I’m so bruised, I can now say, “I have a slight bleeding disorder. It’s called von Willebrand disease. It’s not a big deal.”

And it’s not, really. Not anymore. But terming something a disorder, or disease, does add a degree of seriousness to my condition, even if it simultaneously offers an explanation. Still, I prefer to maintain a hint of bravado as I brandish my marked-up arm, rather than bowing my head in the face of medical reality.