How Romney used the 2002 Games to promote himself 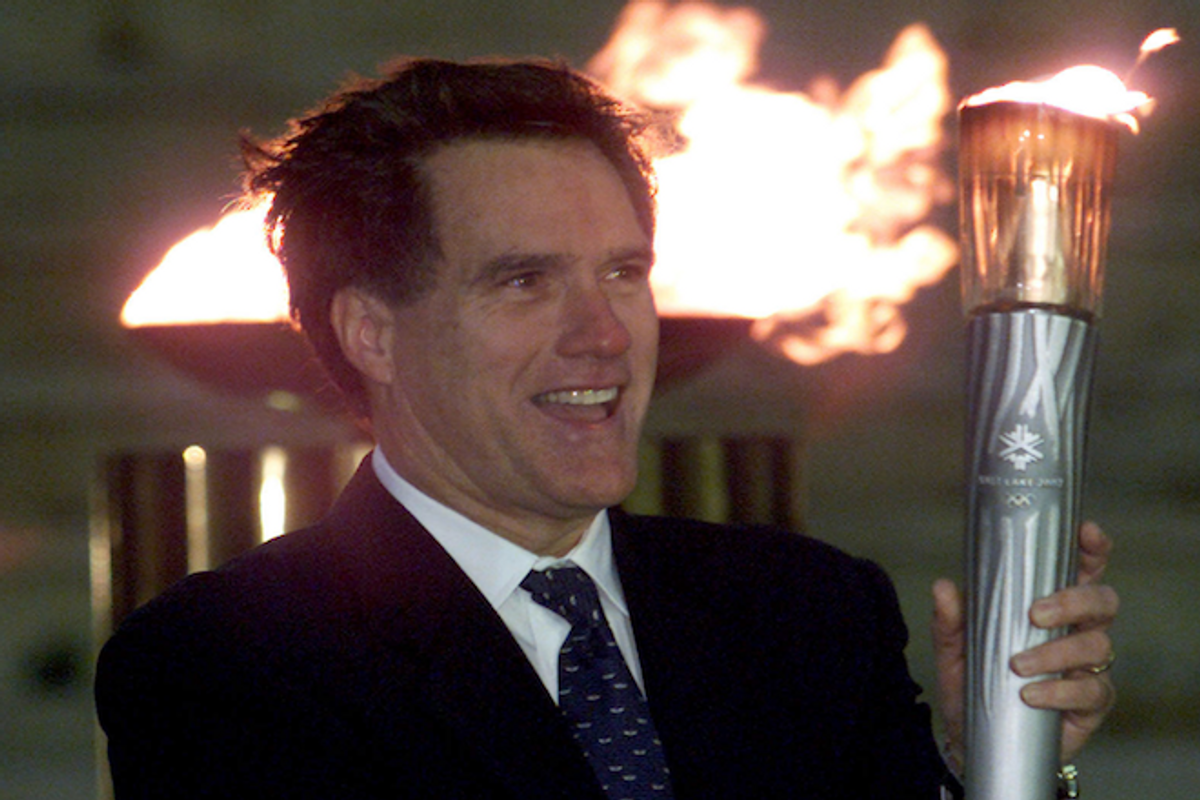 President of the organizing committee for the Salt Lake City Winter Olympic Games, Mitt Romney smiles as he raises an Olympic torch on December 3, 2001, during a handing-over ceremony in Athens' Panathenean stadium. (REUTERS/Yorgos Karahalis)
--

If Mitt Romney wins the presidency in November, he’ll have the Olympics to thank for it. His leadership of the 2002 winter games in Salt Lake City transformed him from a successful but obscure private equity fund manager into a popular public figure. The experience led to a book deal -- 2004’s "Turnaround: Crisis, Leadership, and the Olympic Games" -- which helped fuel his successful run for governor of Massachusetts in 2006. His 2008 and 2012 presidential campaigns have both drawn heavily on his legacy running the games, arguably the only public thing he’s accomplished without embarrassing baggage (Bain Capital) or conflicting policy positions (his governorship).

In an interview with NBC News shortly after taking over the game in 1999, he was asked why he wanted the job. “This is where heroes are made,” he said. “And when it got in a little trouble, I said this is an opportunity to make a difference.” Indeed, Romney made himself a hero of the games unlike any Olympic organizer before or since. (Can you even name another Olympics organizer?)

"This was part of his game plan. 'I'm going to come here, get a national profile [and] be able to look at how I can position myself so that I can move into higher office,’” Ken Bullock, who served with Romney on the board of the Olympic committee, later told NPR. “He's an opportunist. And he took advantage of that.” Indeed, Romney often casually refers to how he left Bain to "help save the Olympic Games."

Romney commissioned five separate official pins bearing his name and likeness, including one that had animals declaring “Hey Mitt, we love you.” He was the first Olympics executive ever to do so, according to the book "The Real Romney" by Michael Kranish and Scott Helman, two Boston Globe reporters. "There have been plenty of big-headed CEOs for Olympic Games, but none has ever had his or her likeness on a pin," says Ed Hula, a veteran Olympics pin collector told NPR. The London games’ official store sells no pins bearing the likeness of Sebastian Coe, this year’s organizer, even though he too is credited with having “saved” the games.

Romney leveraged the position into a national platform, garnering effusive headlines like, “Olympic savior Mitt Romney 'can do anything,’” from the AP.

At both the opening and closing ceremonies, Romney was front and center, delivering a speech from the floor of the arena at the starting event and standing next to President George W. Bush during a 9/11 commemoration at the finale.

In a November, 2001 interview with the Deseret News, Romney clearly put his role in context. "Salt Lake City and Utah will be defined for literally billions of people worldwide through the Olympic Games. So, as the leader of the Salt Lake Olympic team, surely the role that I play will have influence in the community,” he said.