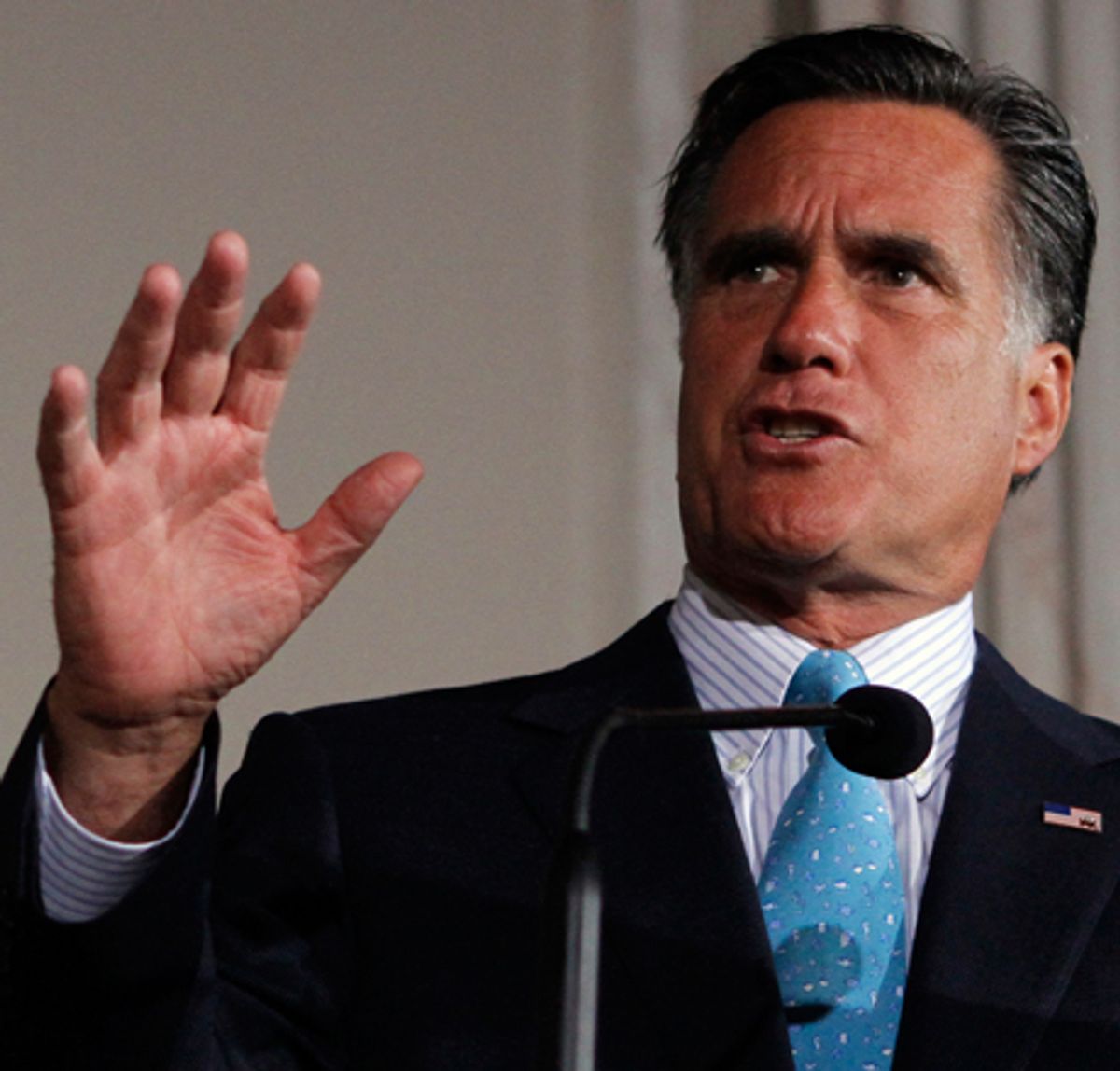 WASHINGTON, D.C. — Like Barack Obama and George W. Bush before him, Mitt Romney is making a politically calculated trip to Israel.

Unlike his predecessors, however, the GOP presidential hopeful will travel to the Jewish state less concerned about demonstrating his foreign policy prowess than reassuring evangelical and neoconservative voters back home about his Judeo-Christian values.

"Presidential candidates like to burnish their international credentials in the summer," said Geoffrey Skelley of the University of Virginia Center for Politics. "Romney is doing what Obama did in the summer of 2008."

"But a trip to Israel is also a chance for Romney to consolidate support among conservative Evangelical Christians, many of whom have been less than excited about his candidacy. These voters, an important part of the GOP base, are strongly pro-Israel in their foreign policy outlook."

Days before kicking off his first overseas trip of the campaign, Romney reiterated his unwavering support for the Jewish State in a speech to the Veterans of Foreign Wars National Convention in Reno, Nevada.

"The people of Israel deserve better than what they have received from the leader of the free world.  And the chorus of accusations, threats, and insults at the United Nations should never again include the voice of the president of the United States," Romney told attendees at theto the Veterans of Foreign Wars National Convention in Reno, Nev.

The former Massachusetts governor will travel to Israel after attending the opening ceremonies of the Olympic Games in London on July 27. He will be welcomed by Israeli Prime Minister Benjamin Netanyahu, a friend since 1976 when both men worked at the Boston Consulting Group.

Romney has made no secret of his admiration for Netanyahu, asserting on multiple occasions that he would defer to the Israeli leader before making important policy decisions regarding the region.

During the Republican primary late last year, Romney criticized former House Speaker Newt Gingrich for a controversial statement about Palestinians, noting: “Before I made a statement of that nature, I’d get on the phone to my friend Bibi Netanyahu and say: ‘Would it help if I say this? What would you like me to do?’"

Perhaps unsurprisingly, Sheldon Adelson, the billionaire pro-Israel financier who once pumped more than $10 million into the super PAC supporting Gingrich, has now turned his attention — and wallet — toward getting Romney elected.

Adelson, a casino owner listed in the Forbes 400 list as the eighth wealthiest American, has made a priority of bankrolling candidates who he believes will deliver on his desires for the Jewish State.

"He is so hawkish on Israel that he finds AIPAC dovish," said University of Delaware international relations professor Muqtedar Khan, referring to the American Israel Public Affairs Committee, a lobbying group that advocates pro-Israel policies. "If you gave me $50 million, I'd take a trip to Israel too."

Adelson has criticized Obama for supporting a two-state solution in Israel. Unlike Gingrich, Romney has said he would support giving Palestinians their own state. But he blames Palestinians for resisting the idea.

Adelson is also close with Netanyahu, who himself is popular among neoconservatives and evangelical Christians who tend to be staunchly pro-Israel, according to Khan.

A Pew poll released earlier this month showed Romney getting 72 percent of the white Evangelical vote. John McCain won 73 percent of Evangelicals in 2008. Nevertheless, the Romney camp remains concerned about their overall enthusiasm for his candidacy, which could translate into lower voter turnout.

"At the end of the day, Evangelicals will predominantly vote for Romney because Obama is completely unacceptable to a large portion of them. But plenty of polls have shown that Evangelicals are skeptical, if not critical, of Mormonism. So the concern for the Romney camp is the level of enthusiasm among these voters," Skelley said.

While not yet articulating specific actions he'd take in the region, Romney has offered general support for a more hard-line approach.

"When you look at his other policies, they almost all fall in line with Israel's view and vision," says John Esposito, a professor of International Affairs and Islamic Studies at Georgetown University.

According to his campaign website, a Romney administration would "pursue a strategy of supporting groups and governments across the Middle East to advance the values of representative government, economic opportunity, and human rights."

Romney also calls for organizing diplomatic and assistance efforts in the Middle East under a regional director who "possess unified budgetary and directive authority."

His broad pronouncements leave many experts to believe the former Massachusetts governor won't deviate too far from the current administration's policies toward allies in the region, except in his use of the American bully pulpit.

"It would be difficult to imagine the US pursuing a foreign policy toward Egypt and Bahrain that would be different from what it is now under any administration, Republican or Democrat," said Mehran Kamrava, director of the Center for International and Regional Studies at Georgetown University's School of Foreign Service in Qatar.

Many within the Republican Party are unhappy with the current approach to Iran, although it has not deviated much from the second Bush administration.

"Obama's been president for three-and-a-half years and it's been three-and-a-half years of steady progress by Iran in the direction of achieving its goal of having a nuclear weapon," said Joshua Muravchik, a scholar formerly at the American Enterprise Institute and now a fellow at the School of Advanced International Studies of Johns Hopkins University. "It would not surprise me if various leaders of the gulf countries are worried that Obama might not have it in him to stop Iran."

Indeed, some have suggested that the Sunni-dominated, oil-rich monarchies making up the Gulf Cooperation Council (Saudi Arabia, Kuwait, Qatar, the United Arab Emirates and Oman) would also support a more vocal opponent of their Shiite neighbor.

"When McCain ran against Obama, you'd be surprised by how many monarchies supported McCain. They actually liked Bush too. And Obama looked unpredictable and could be a problem in terms of his rhetoric," Esposito said. "The kind of rhetoric that Romney is putting out there is going to be very attractive to many regimes. They want to see a hard-line position on Iran. Whatever they say, they can live with Israel as long as Israel doesn't give them a problem and has a hard-line on Iran too. This all plays very well to the regimes right now."

Another challenge for the next administration will be the ongoing relationships with Arab countries in transition.

Countries like Egypt and Libya could take years to fully stabilize, according to Judith Kipper, the director of Middle East Programs at the Institute of World Affair. Most politicians and international relations experts have held off on suggesting a course of US action in the region, beyond generalized engagement.

Ultimately, Romney's views on these countries will be shaped by the recommendations of a series of national security and foreign policy advisers recruited from the last GOP administration.

"On one hand, the Republican Party stays away from George W. Bush like he's the plague, but Romney is taking Bush appointees and loyalists as his advisers because of the influence of the Christian right and the Tea Party, people who really are very comfortable with the policies of some of these folks," Esposito said.

"I think he's convinced that there may be enough of a constituency there who will go for this kind of rhetoric — a more militant approach to Iran, uncritical approval of Israel and its approach to democracy movements in the Arab world.

The only Arab member of the team, Walid Phares, is a controversial figure who has drawn scrutiny for his alleged past participation in right-wing Christian militias during the Lebanese civil war. He endorsed Romney early in his 2008 campaign for the White House. And in October 2011, Romney named Phares as a special adviser and co-chair of his Middle East working group.

Esposito and others have questioned whether someone like Phares – or even Bolton -- could secure Senate confirmation if a President Romney were to appoint him to an official post.

But it's far too early to tell whom Romney would ultimately bring into his foreign policy fold if elected.

"Economic factors will drive his foreign policy making, and my guess is he'll end up somewhere between Bush the younger and Obama," said Kenneth Wald, a political science professor at the University of Florida. "This is a guy who is in business so what fundamentally will drive his policies are business concerns."

"My guess is he'll reach out to some members of the traditional Republican establishment who were around before Bush came in," he said, adding: "There are still people who are much more centrist and much more pragmatic. At the end of the day, that's who I would think he'd follow."