Commentary: Reporting massacres that didn’t happen, and other media sins 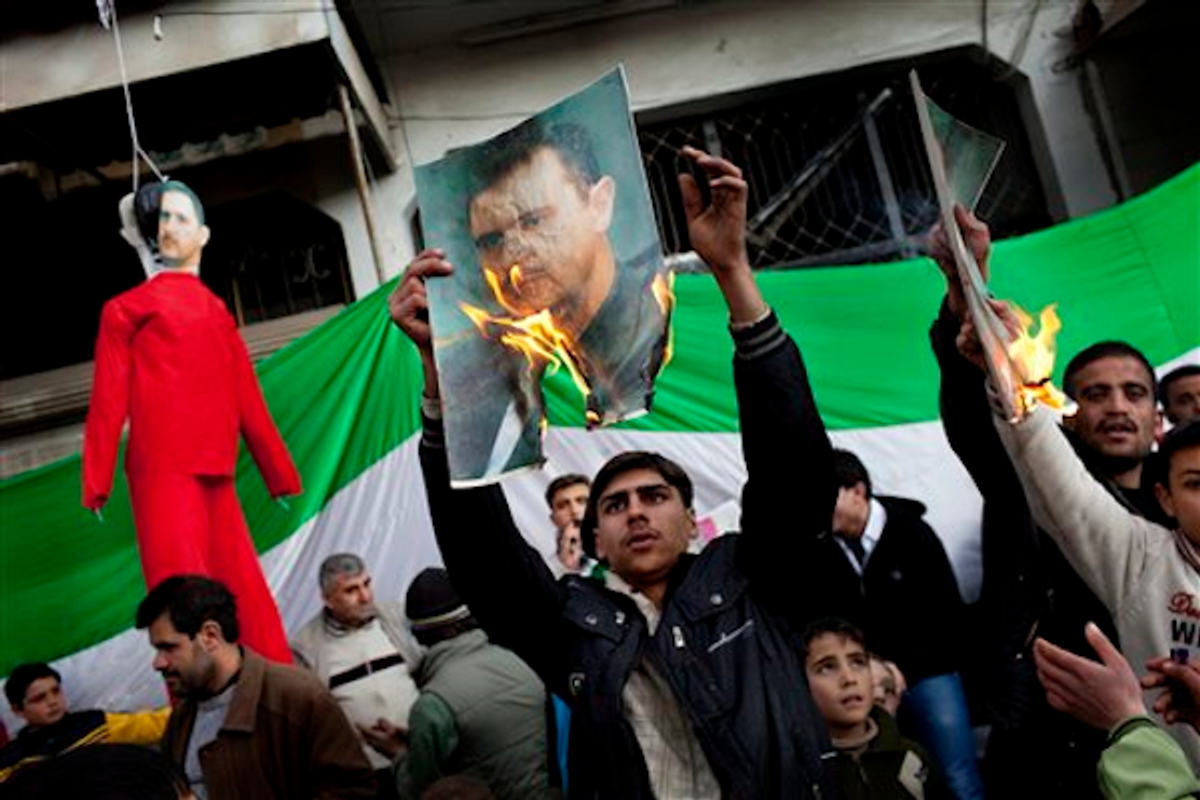 Antibes, France — The Western media should have learned a lesson from the Iraq fiasco.

Most of the mainstream media gave a free pass to a Republican White House that promoted the Big Lie that Saddam Hussein's regime was somehow linked to terrorism and armed with weapons of mass destruction. The Bush administration found it was child's play to manipulate even the New York Times.

A lot has happened on the road from Baghdad to Damascus, but it seems that both Washington policymakers and the media still have much to learn.

This time a Democrat administration is using the Arab Spring to get rid of an inconvenient leader. No need to invade Syria or risk American lives. Just use discrete American guidance and arms supplied by American allies in the region to make sure that a home-grown insurgency has enough of the right stuff to win an insurrection. “You'll notice in the last couple of months, the opposition has been strengthened,” a “senior U.S. Official” told the New York Times on July 20. “Now we're ready to accelerate that.” U.S. Officials have been selectively leaking information on the supposedly clandestine American involvement in the Syrian conflict, an apparent effort to shape public opinion by suggesting that the United States is helping elements of the opposition, without explaining how they can tell the good guys from the bad guys.

Propaganda, or the mobilization of public opinion, is a vital part of the operation. And once again, the American and Western media seem to be asking too few questions.

Western journalists are of course having a hard time reporting the war. Some have lost their lives. Barred from legally entering Syria, most are covering it from Turkey, Lebanon or more distant listening posts. But as pointed out by Russ Baker, whose web site is sharply critical of American media coverage, reporters should be telling us more about their usually anonymous sources inside Syria.

Who is the “Mohammed” who was telephoned by the New York Times and reported the “massacre” by government forces of 200 persons in the village of Tremseh). Was he an eye witness? Did the reporter try to find other sources?

Two days later, the Times acknowledged that the “massacre of civilians” was more likely a clash between heavily armed Syrian military and lightly armed local fighters, and the death toll was closer to 100, most of them young men.

Western reporters clearly tend to assess opposition sources less critically than Syrian government sources. That bias may be justified, but civil wars are rarely fought by angels. Horrible things are done on all sides.

The Western media also seem to overlook the fact that the Syrian government is doing what most governments do when faced with an insurrection. They use whatever force they have to stamp it out, whether it's Sherman marching through Georgia, or Israel pounding Gaza.

You may not like the Assad family, but Western governments did business with it (and still do with a number of other Middle East dictatorships) for decades despite its behavior.

The pattern in the reporting of the Syrian civil war suggests the opposition (possibly in collaboration with western governments) are trying to manipulate the media. Headlines of increasingly bigger “massacres” of innocent “civilians” and reports of serial defections by regime generals and other officials all tend to give the impression that the opposition is on a roll and the regime is on its last legs. These reports may or may not be accurate, but they should treated with a bit of circumspection.

Libya was the play book for the Obama administration's handling of Syria, and this time, the information war seems to be following the same script. Allegations of mass rapes and distribution of condoms to government soldiers were duly reported by western media during the Libyan campaign, and guess what, allegations of widespread rape by the Syrian regime have just popped up.

The end result of disposing of Colonel Gadaffi can hardly be called a success. The country is still in turmoil. You could even argue that western involvement failed to accomplish its supposed purpose, to protect civilian lives. In Syria, the result of Western involvement may be far worse.

Post Ottoman Syria has a history of sectarian conflict, which was brutally crushed by the French during their mandate in the 1920's and again by the Assad family, who took a page out of the French book and ruled with an iron hand. The danger now is that Syria will again split into hostile ethnic enclaves with unpleasant consequences for the neighbors, including Israel. A relatively stable country could become a major source of instability in the Middle East, or in the words of one expert on the Middle East, “an outcome that contains the seeds of a war that never ends.”

The mainstream media have begun to air these concerns in recent weeks. It would have been better if they had been ahead of the curve and helped inform a public discussion of American involvement in Syria before it is too late.