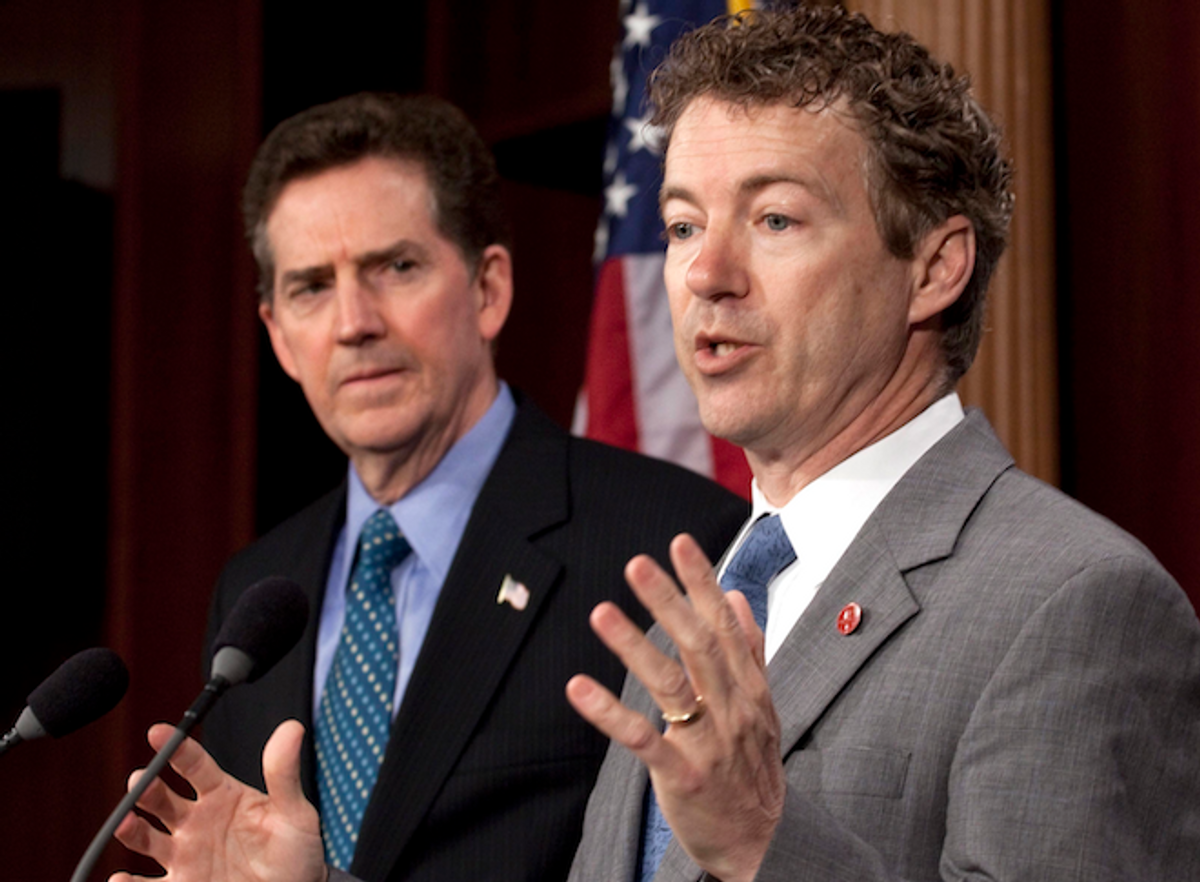 The U.S. Treasury believes that it can generate $8.7 billion in revenue over the next 10 years by cracking down on Americans who dodge taxes by parking cash overseas. Some Republican senators, including a couple of Tea Party renowned -- Rand Paul and Jim DeMint -- are criticizing the plan, complaining that the new rules will raise operating costs for banks.

In Paul and DeMint's perfect world, there would be no taxes at all. And we know that the standard conservative argument to deflect regulation is to argue that "burdensome" rules raise costs. So it's not hugely surprising to see the two conservative icons rally against the Treasury on an issue that combines both taxation and regulation.

But let's break this down a little bit more. Bank misbehavior and irresponsibility wiped out trillions of dollars of American wealth, forcing millions of Americans out of their homes and jobs. Fixing the damage is costing the U.S. government a lot of money. If one way to find the cash necessary to do things like pay for unemployment benefits requires banks to do a little extra paperwork, is that really so bad? As far as I can tell, populist Tea Partyers hate Wall Street just as much as any Occupy activist. It just doesn't ring true: Give me liberty, or give me death, and, oh, by the way, keep the regulatory burden on multinational banks low so that they can help the richest Americans avoid paying taxes.

The legislation authorizing the Treasury to go after American tax dodgers is the Foreign Account Tax Compliance Act, or FATCA, passed in 2010 as part of the HIRE Act (more familiarly known as the "jobs" bill). On Thursday, the Wall Street Journal reported that the Treasury had released new details on intergovernmental cooperation with respect to combating cross-border tax evasion. But earlier in the week, reported the Journal, four Republican senators, including Paul and DeMint, sent a letter to the Treasury warning that FATCA could "impose major new regulatory costs on domestic banks."

Tea Party outlets have been screaming for years that the new regs will make life miserable for American expatriates. Some poor souls, they warn, might even be forced to renounce their U.S. citizenship just to get a bank account abroad! But a close look at the proposed regulations reveals that your average expatriate will have nothing to worry about.

FATCA isn't about making life hard for expatriates. It is targeted at big players who are moving huge amounts of cash overseas for the specific purpose of avoiding their U.S. tax obligations. And Rand Paul and Jim DeMint are defending these upstanding members of the 1 percent by carrying water for banks who want to avoid the paperwork costs involved in ferreting out the tax dodgers.

Is that how the Tea Party wants this country to be run -- in the best interests of the richest Americans and the banks?