Whither the Olympic protests?

The London Games once seemed a likely target for protests. But, so far, there's little to note besides graffiti 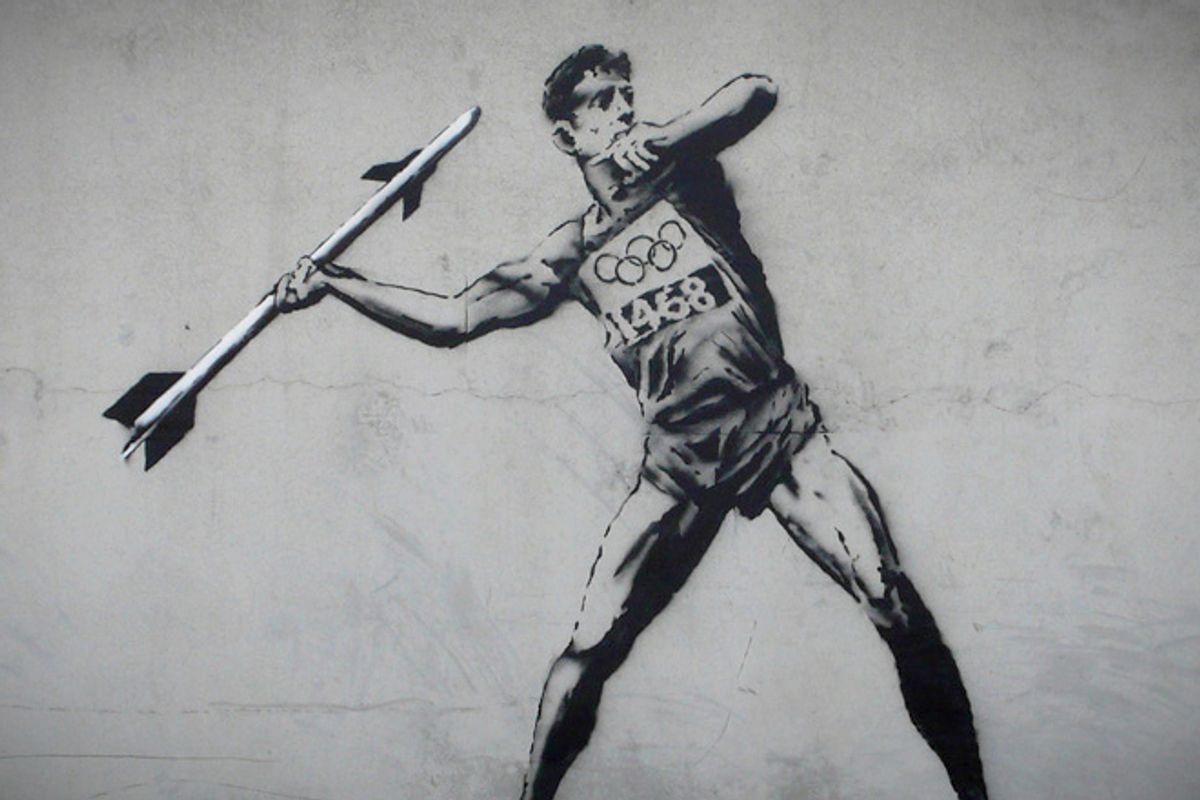 “No Olympics are without pain,” said Peter Handy, London’s commissioner for transport, this week as miles and miles of the city’s erratic road network closed to the public to create "Olympic Lanes" for athletes, dignitaries and sponsors, bottlenecking London’s already disgruntled drivers. With a dollop of grumbling, Londoners appear to be accepting this Olympic “pain," which also includes razed neighborhoods, perturbing security measures and the barrage of garish corporate propaganda plastering most of the city surface.

The London 2012 Games, which officially open tonight, have much of my home city undulating with waves of jingoistic excitement. However, many tens of thousands of Londoners resent the spectacle for the disruption it’s wrought, the corporatism underpinning it and, in some cases, simply out of the great British tradition of resentfulness (certainly more storied than our sporting prowess). Yet, of London’s many Olympic resenters, there are comparably few actual dissenters. A smattering of anti-corporate, Olympic-critical graffiti and street art decorates the odd street or sign; London’s famed taxis have staged noisy but ordered protest processions against the Olympic lane restrictions; and modest, calm protest marches are planned for the weekend, but the games do not promise to be a flashpoint for unrest in a city that has erupted in riots and unruly protest in recent years.

“It’s very British, I’m afraid. There’s almost a culture of grumbling and not doing much about it,” said Julian Cheyne, a spokesperson for the Counter Olympics Network, a coalition of anti-corporate, community and environmental groups, including Occupy London participants, who will join together this Saturday for a permitted march and rally in East London. Cheyne expects no more than 2,000 attendees but is nonetheless pleased to help amplify the criticisms levied against the Olympics, most passionately, perhaps, by residents in London’s East and South East. “A lot of the main impact is felt very locally,” added Cheyne. “It’s the people of South East and East London who’ve had their spaces taken away without consultation.”

And, indeed, displacement of some of London’s poorest residents in the name of urban regeneration is just one of many issues stoking anger at the all-pervading Olympic spectacle. Critics have gone so far as to decry the treatment of low-income residents around the Olympic park vicinity as “social cleansing”; households on government benefits have been uprooted en masse, while even the modest commitments to the creation of new affordable housing are likely to fall short (fewer than 700 units will be developed for the long waiting list of households reliant on government housing benefits).

Anti-corporate sentiment, bolstered in the past year by Occupy (which settled in a contested and ultimately doomed encampment outside London’s St. Paul’s Cathedral), has seen an upsurge in response to the growing Olympic hysteria. Billboards, bunting, posters, taxis, lampposts and barriers are dripping with ads from official Olympic sponsors, brandishing the jagged 2012 logo (which, according to writer and official anti-Olympic author and curmudgeon Nick Lezard, looks like Maggie Simpson performing an unseemly act on President Bill Clinton). McDonald's, Coca-Cola, Visa and Dow Chemical are among the official sponsors whose involvement with the games has riled even keen supporters of the sporting competition.

“Thanks to Dow's sponsorship, Bhopal is back in the news (kinda). Thanks to BP, we're reminded of Deepwater Horizon. Thanks to Coca-Cola we're reminded of a corporation that silences dissent in South America through murder and a soft drink that makes you fat,” an arts activist who goes by “Agent Monstris” noted. Monstris is among a number of other “agents,” the Space Hijackers, working under the banner of “Official Protesters of the London 2012 Olympic Games ™” as a playful detournement of the brand and trademark protectionism surrounding the Olympics. (The London Organising Committee of the Olympic and Paralympic Games, LOCOG, has a team of uniformed “brand police” to track down infringements, including unofficial juxtaposition of the terms “games” and “2012.” The Space Hijackers illuminated LOCOG’s beady eye for brand protection when they used Olympic-style imagery for their “official” protest Twitter feed, which LOCOG duly pushed Twitter to suspend. Lezard noted that there is some irony with the games’ tag line of “diversity and inclusion,” since there will not even be a diversity of beer or food on offer, because only products from official sponsors will be sold or allowed onto the grounds of all Olympic venues).

The Olympics, as a vehicle for corporate branding (even selling condoms can take an Olympic theme), have thus provided ample opportunity for culture jamming, of which groups like the Space Hijackers have taken full advantage. Guerrilla artists have subverted street signs and slogans. Earlier this week, a large billboard appeared in East London brandishing the trademarked Olympic slogan “Inspire a Generation” under rows of police officers emerging from a black background. Meanwhile, graffiti artists have struck, with a grotesque caricature of Ronald McDonald carrying a Coca-Cola branded Olympic flame dripping in BP oil.

“As political artists we try to redress the imbalance and injustice (and overall governmental crapness) by taking the piss,” explained Agent Morris (“taking the piss,” I should note, is a Britishism for extreme mockery). “We use comedy and satire to make a point. Our friend -- the billboard vandal Dr. D -- calls it ‘taking the piss with a point,’” Montris added.

And indeed, London’s preparation for the games provided a surplus of material for piss taking. Famed graffiti artist Banksy struck again this week with two spray-painted images of Olympic athletes, one leaping over a disused fence, the other throwing a missile like a javelin – an allusion to the missiles placed atop residential buildings near the Olympic park in an aggressive show of militaristic security. Meanwhile, two other specters haunt London, and they are the Olympic mascots: the one-eyed demons depicted in statuettes all over the city, purportedly representing drops of steel (for some reason), but inadvertently alluding to London’s title as the most surveilled city on earth. Design critic Stephen Bayley called them “distorted, deranged smurfs, which you can hang on key-rings.” My particular favorite piece of anti-Olympic graffiti features one of these mascots avoiding the sexual advances of an alley cat.

It is a surprise to some, however, that Olympic dissent has largely taken the form of artistic sabotage, or well-reasoned blog posts. I remember distinctly watching footage from the December 2010 student protests, in which students and allies stormed and briefly occupied Britain’s conservative party headquarters, and thinking that the Olympics would be a hotbed for international activist and anarchist action. When riots spread though London last summer, I couldn’t help wondering whether the authorities-that-be were regretting their choice of 2012 games location.

“If you’d asked me in 2011, I’d have said I’d expect a huge, vibrant protest movement to be happening now, with mass student trade union involvement. There has been a deflation of this sort of thing in the past year,” Guardian reporter Matt Taylor, who has long covered protests in London, told Salon. Noting that it is problematic to pin down one cause or another for the swells and contractions of social movements, Taylor speculated that many groups may see the Olympics as a bad target for protest (because there are many who do support the games’ presence in London). He also stressed that a “huge security presence” was working as a deterrent. Many would-be dissenters are well aware that, within the past year, young people received six-month jail sentences for stealing water during the riots. Meanwhile, a handful of graffiti artists, some of whom have not sprayed on a city street in a decade, were arrested last week on conspiracy charges and given strict bail conditions to stay far from London transport and far from any Olympic venue. A group of anti-BP performance artists were arrested in Trafalgar Square last week when they used green custard in a guerrilla performance. These Olympics, it seems, will not tolerate the misuse of dessert.

Locales in which Olympic development has produced the most tension have also been the focal points for thinly veiled hearts-and-minds campaigns, aimed to sedate young people read since 2011 as potentially riotous bodies. School curricula have taken on Olympic themes and the large BBC Radio One Weekend music festival was renamed the Hackney Weekend, which brought Rihanna and an intended sense of local pride to the swiftly gentrifying East End. None of the inequality, government cuts, social ills or police practices – the context of last year’s riots -- have disappeared. And indeed, the Olympics have provided a context for anti-corporate and anti-gentrification unrest. Instead, however, Olympic criticism has taken the form of grumbling and mocking; keeping calm and carrying on in the company of missiles and one-eyed monsters.