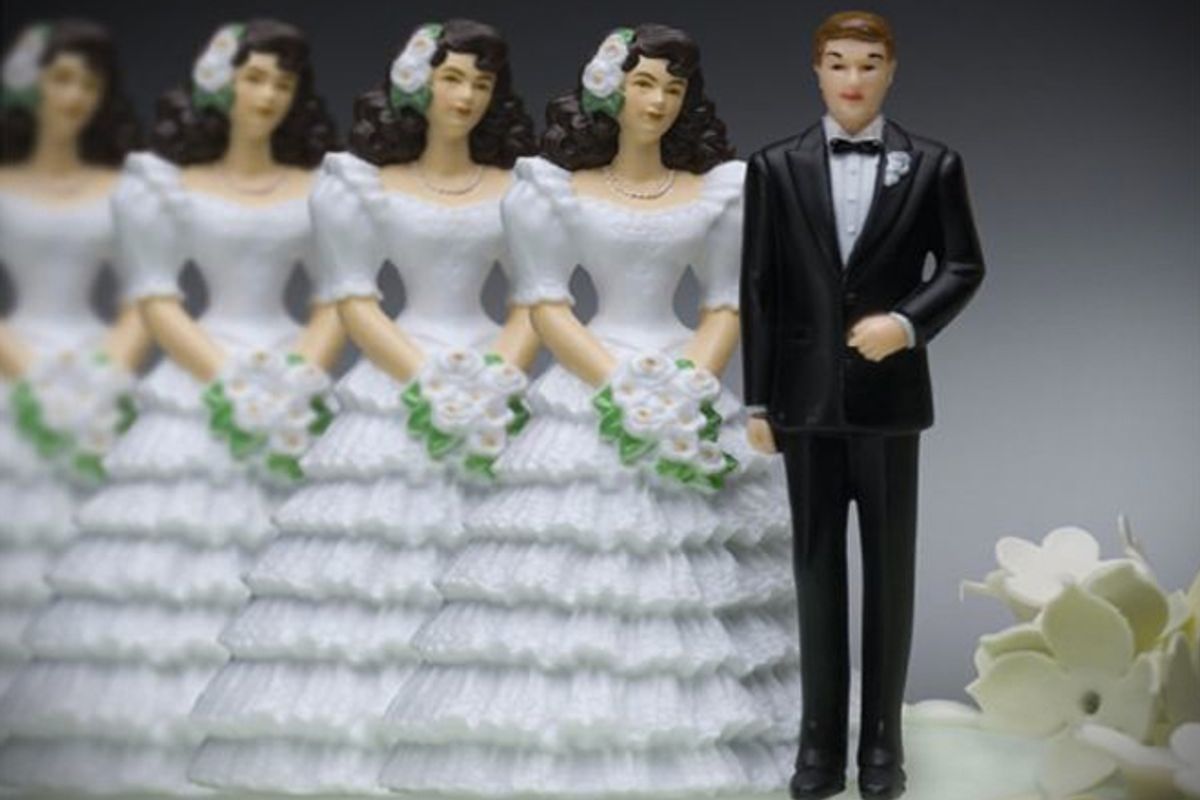 This article is an excerpt from "Polygamy in Primetime: Media, gender, and politics in Mormon fundamentalism" available from Brandeis University Press.

Polygamist Elizabeth Joseph writes that if polygamy didn’t exist, “the modern American career woman would have invented it. Because, despite its reputation, polygamy is the one lifestyle that offers an independent woman a real chance to ‘have it all’”. Elizabeth, who worked as a journalist, relied on her co-wives to help her with child care and meal preparation. She called it a “free-market approach to marriage” that allowed her to pick the best man available, regardless of his marital status. Her husband’s other wives actually enhanced her marriage to her husband. Alex, she said, had vast experience as a good husband long before he married her so he was skilled; he didn’t need to be trained like most husbands do. When Elizabeth became a lawyer, she introduced her beautiful and talented secretary, Belinda, to her husband. He married Belinda shortly afterward, uniting the two women as friends and wives. Elizabeth’s family, the Alex Joseph clan of Big Water, Utah, has been widely popularized in the media. When I met Elizabeth Joseph at the gay-polygamy forum at the Salt Lake library, I found her to be very strong and outspoken. Ted Mikels’s documentary Alex Joseph and His Wives describes how Alex, a former policeman, became a polygamist in the Allred Group, eventually taking on twelve wives (ironically, from non-Mormon families). He and his wives started their own town in Big Water and introduced libertarian ideals to all new citizens.

In addition to seeing polygamy as a viable alternative to monogamy, many fundamentalist women are empowered in their roles as mothers of Zion. This concept is related to the notion of Republican motherhood that was used widely in the Mormon movement for women’s suffrage in the late nineteenth and early twentieth centuries, directed by outspoken polygamous women such as state senator and doctor Martha Hughes Cannon. The ideas of Republican motherhood benefited pioneer women in the private and public realms of life. For example, in the early days of the LDS Church, Brigham Young encouraged women not only to become “mothers in Zion” but also to advance their careers in business and politics: “Women are useful, not only to sweep houses . . . but they should stand behind the counter, study law or physics, or become good bookkeepers. . . . All this enlarges their sphere of usefulness for the benefit of society at large.” Elizabeth Joseph, Alex Joseph’s plural wife, agrees with Brigham Young. She says that plural marriage is empowering for women. “It provides me the environment and opportunity to maximize my female potential without all the tradeoffs and compromises that attend monogamy.” Another advocate of legalizing polygamy writes that plural marriage frees women to pursue a career and increases the overall value of women in society.

Of particular importance is the ability of women to increase their status with the number of children they bear for their family kingdoms. Marvin Jessop’s first wife, who bore thirteen children, for example, is considered a “queen among women.” June Jessop, a naturopath and midwife trained by Dr. Rulon C. Allred, served as midwife at the birth of most of her community’s children. She also enjoys enormous prestige and delegates tasks to men and women alike. Mary, the wife of the mayor, is another example of empowerment. She was once married to one of the AUB councilmen and found him to be emotionally disturbed. She demanded to have a better husband, and the priesthood gave her the choice among all the men. She chose a wealthy man, the mayor, who had two kind and gentle wives. She is known for her ability to speak her mind and provide her children with protection. She is a feminist in every sense of the word. In addition, there is Emily, a business- woman with a bachelor’s degree who runs the family’s operations, which earn hundreds of thousands in income. She is an independent second wife (that is, she is no longer pledged to any group), and she enjoys “top dog” status as the family’s primary breadwinner. Rarely does anyone in the family, including her husband, disagree with her decisions. Finally, Dauna Baird, the administra- tive director of the AUB, should be acknowledged here. For many decades, Dauna has overseen the financial and religious organization of the sect under the leadership of Owen Allred. I have never met a tougher lady. She is the check and balance of the group, reminding councilmen and members alike when they are in the wrong or in need of her fine-tuned adjustment to their moral characters.

In spite of potential obstacles to fundamentalism, many polygamist women find ironic power through a unique doctrinal interpretation of the gospel. When men speak of their kingdom, women often refer to themselves as royalty, sitting on thrones and ruling over their families as promised in Doctrine and Covenants 75:5. Apostle George Q. Cannon emphasized women’s divine calling:

A great glory is bestowed on woman, for she is permitted to bring forth the souls of men. You have the opportunity of training children who shall bear the holy priesthood, and go forth and magnify it in the mist of the earth. . . . God has reposed in them great power; if they wield that power for good it will be productive of peace and happiness and exaltation to them.

Some fundamentalist women claim to have had a unique revelation that was not given to men about their future children. These spirit children appear to them in dreams before they are conceived, requesting entrance into this world. Since women often control the sexual rotation schedules, they can control the number of children born into their families, making it possible for them to open the gates of heaven to new souls through their wombs. Women also speak of the nature of the sisterhood, which allows them to spiritually and temporally endure the hardships of this world. Learning to share is a heavenly art that is meant for the greatest of souls. Men, they say, are weak and cannot collaborate well with other men, so it is up to women to rise to the task. When I asked women why they can’t have more than one husband, one woman told me, “Ha! Men could never deal with having to sexually share a woman with another man; they aren’t capable of getting beyond their own inflated egos.”

Fundamentalist women also experience relative power associated with the religious and political callings. For example, in the period 1989 to 1993, of 110 individuals (75 males, 35 females) men and women shared the same propor- tion of administrative callings. Although some of these callings ranked higher than others, this suggests that women are actively in- volved in the leadership of the community. There was, however, a significant difference in the area of “spiritual” resources; that is, access to priesthood power and the right to administer Melchezedek blessings; 7 percent of the women and 40 percent of the men hold these powers. The women were typically the wives of the prophet or councilmen or rose to these spiritual positions through birthright. Yet 54 percent of the women of the community under study had access to the sacred ordinances and rites associated with the endowment house, which only 34 percent of the men had.

Women use the blueprint of Jesus’ wives—Mary and Martha—to help guide them. In Mormon tradition, the two sisters loved each other and when they married the Savior, they became an eternal round. Martha, focused on home and hearth, offered unique gifts to the family with her cooking and caregiving. Mary, who was more active in the public realm, provided support and counsel to her husband in his dealings with the community. She worked in the marketplace, in the square, in politics. Each of the two sisters, who were each devoted to their callings, their families, and their husband, was the perfect complement to each other. That is what is sought among sister-wives — the missing ingredient in their lives, the opposite characteristic that will “complete” the other. So if one wife is an introvert, she will be drawn to a woman who is an extravert so that her children will learn social skills and public speaking. She, in turn, will teach her co-wife’s children spirituality and quiet contemplation.

janet Bennion is a professor of anthropology and sociology at Lyndon State College.