Too many exclamation points!!!

My inbox is filled with overeager punctuation. Why are we typing so breathlessly, like we're all skydiving to prom? 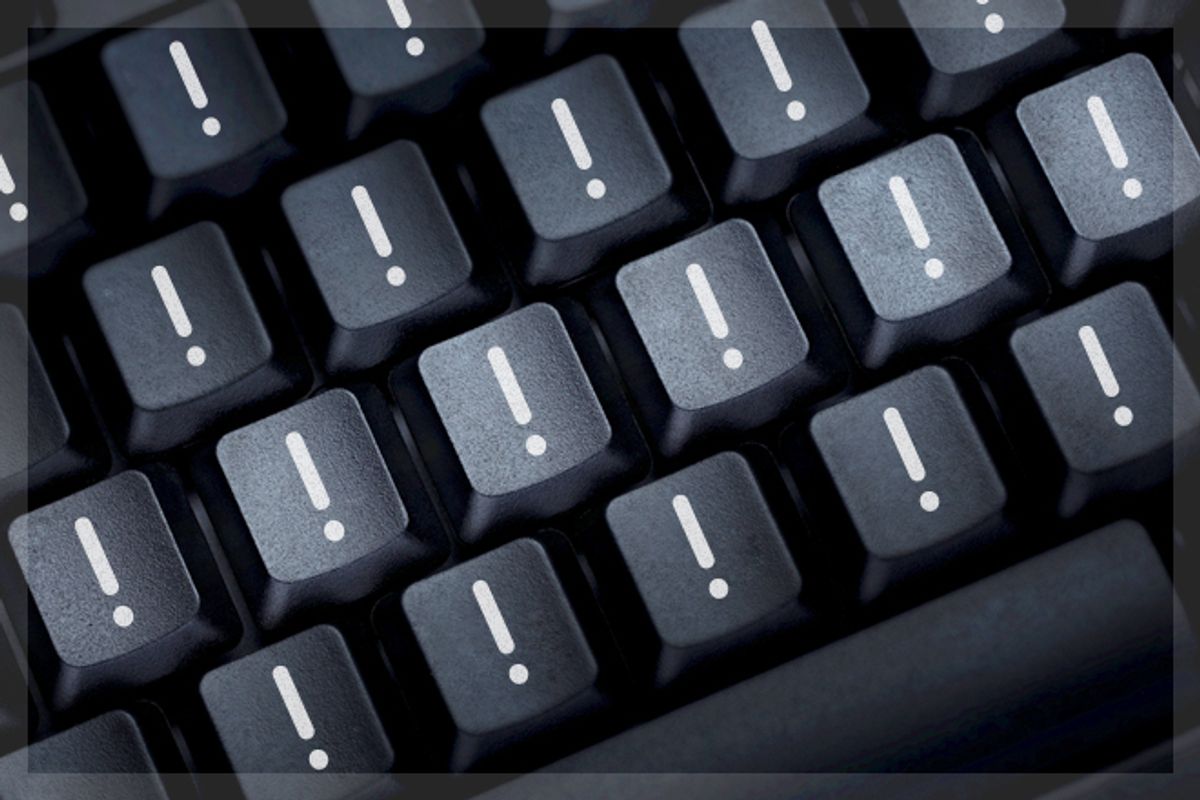 “HEY STEVE!” someone recently emailed me. Both my name and “Hey” were in caps, and all five sentences in the message ended with exclamation points. At first glance I assumed the message was a loved one writing from a plane that was going down. It turned out to be someone I barely knew, discussing minor logistics and thanking me for something that had taken no effort on my part.

I'm not the first to point out that we're in a punctuation arms race in emails and texts. “Thank you!!” people reply, like you just sent them a kidney instead of an invoice.

"See you at 1:00 for the meeting," I type, and then hesitate: If I don't add an exclamation point it sounds like I plan to kill the person when I get there. And yet when someone emails me about a meeting with an exclamation point, I think, “Listen, it's a meeting. The best it could go is that there are bagels. If you are really that excited about it, you're a psycho.”

But I admit: I do it too. I’ll drop an exclamation point or nine in an email or text to smooth the transaction. I do it not because I’m nice but because I’m lazy: Instead of finding the right words I find the "Shift” and the “1" keys. Synthetic excitement explodes out of my cursor, unearned. And I can sound friendly without all the effort of actually being friendly.

But I’ve also come to hate it. I hate that I’m trapped by it, that if I don't put six exclamation points in an email or text I sound like a jaded ex-bullfighter or a 13-year-old goth girl.

We communicate electronically now, and that has its own art form: How long to wait before answering our boss to convey that we’re on top of things yet also busy. Whether to use emoticons or not. Whether to use proper capitalization or not. Deciding whether or not to reply all by scrolling through the list of recipients and making snap judgments about them. Those people who reply to your emails by typing their responses within the email you sent, their answers ripping through your email with a different shade of text like they’re the Voice of God. The sweet, definitive clack of hitting send on a nice 10:30 a.m. burn to a college buddy in a chain of email banter, picturing faces curling into smirks at the desks of jobs that keep them serious otherwise. The sting of your buddy’s reply. The snug buzzing of a text against your thigh, with the quick calculation of who it probably is based on recent response time patterns.

Exclamation points are part of all this. They set the tone of these transactions that are intimate, beamed into our pockets, flicked into our inboxes, and yet still not face-to-face. And when used too much they come off like punctuation with a motive, a little plea to be liked. Or like tiny specks of implanted networking. If it were all a party, the periods would be by the bar, drinking whiskeys and politely discussing the price of daycare, the commas chiming in at just the right moment, while the exclamation points pretend to dance, nodding furiously at anything anyone says, smiling so hard their eyes look crazy, taking way too many photos, teetering on their impractical shoes — tiny dots under those tall frames, fitting: excitement’s such an unsteady emotion compared to the loyalty of regret or the militia-like reliability of anger— spilling their Red Bull and vodkas, and claiming to have the time of their lives.

The problem is that life is not a party. Have you looked at life lately? It’s not that exciting. It consists mostly of showering and trying not to trip. The period is calibrated to suffice most of the time. So I’m left wondering why we’re typing so breathlessly, like we're all skydiving into prom.

The answer, of course, is because we want life to be exciting. And we want to be friendly.

But exclamation points give it all away too soon. They short some social circuit. They make us seem needy and insecure, which of course we all are. That’s why we communicate to begin with, right? We need that invoice, please, need to follow up and confirm that meeting for 1 o’clock, need to check with a friend that they’re going to the awesome party! — the party we’re actually nervous about attending, where we’ll try to fit in by half-dancing and nodding and drinking a fun energy drink cocktail, and smiling harder than normal in the hopes that people like us.

I realized I was sprinkling exclamation points in emails and texts as a kind of hedge against the chance that the person on the other end wouldn’t like me. I realized I was being annoying: When the macro seeps into the micro — when our hopes and dreams start showing up in emails about sponges in the break room — it’s called melodrama. So lately I’ll type an exclamation point, pause, and then delete it. And just hope that when I do get to the meeting they’ll be pleasantly surprised that I don’t plan to kill them, that they just might like me, period.