Will Asian voters swing the election?

In 2010, Asian immigrants outnumbered Latinos, and many of these newcomers haven't chosen between Romney and Obama 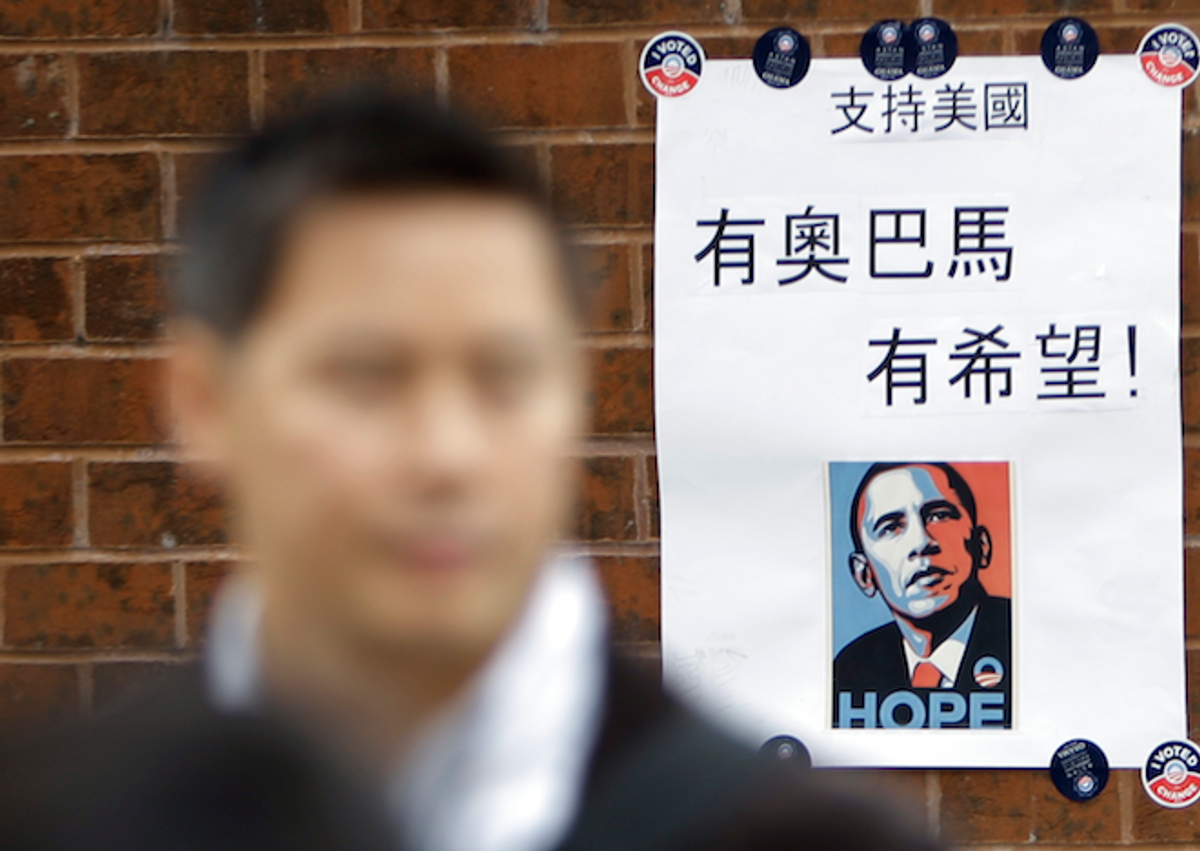 They have been called the “forgotten minority” and a “sleeping political giant.” Just four years after being politically ignored, however, it now appears they are finally attracting attention. They are Asian Americans, and these once “overlooked” voters are being discussed as potentially “decisive” “game-changers” in the 2012 presidential election.

According to an April poll by Lake Research Partners, Asian Americans tilt Democratic and favor Barack Obama over Mitt Romney, but nearly a quarter of them remain undecided about the presidential race, and a much larger share of Asian Americans report never having been contacted by either presidential campaign  — leaving many of them up for grabs. “Asian-Americans have, in the minds of the Democratic Party and Democratic candidates, gone from a marginalized community to the margin of victory,” California congressman and Democratic National Committee vice chairman Mike Honda recently told the Hill. Honda’s district is 49 percent Asian American, the largest such share of any district outside Hawaii.

So what exactly do we know about Asian Americans, and their political preferences and tendencies? Quite a bit, actually.

Asian Americans are also the best educated and most affluent racial minority group in the country, and in fact are better educated than and nearly as affluent as white Americans. “What’s distinctive about them is their educational credentials,” says Paul Taylor, co-author of the Pew report. “These aren’t the tired, poor, huddled masses … They are the highly skilled workforce of the 21st century.” Asian Americans “tend to be more pro-business and pro-market,” says Paul Ong, professor of Asian American Studies and Public Affairs at UCLA. But Ong cautions that “many have found that high education does not mean fewer racial barriers.” Despite their schooling, he told me, many U.S.-born Asian Americans lag behind similarly qualified, non-Hispanic whites: “They still face obstacles because they are Asian Americans, including the glass ceiling.”

Because of their diversity in ethnicity and country-of-origin, Asian Americans are a more multi-faith group than, say, Latinos, who are predominantly Catholic, with a minority strain of Protestants. About two in five Asian Americans are Christian: Catholics are generally Filipino or Vietnamese, while significant shares of Koreans, Japanese, Filipinos and Chinese are Protestant. Another 14 percent are Buddhist, 10 percent Hindu, and fully one-quarter are unaffiliated agnostics or atheists. Perhaps most surprisingly, about a third of Asian Americans switched their religious identity from the one practiced in their childhood home, with most conversions to either no affiliation or Protestantism.

As for their politics, Asian Americans preferred George H.W. Bush and Bob Dole over Bill Clinton in both 1992 and 1996, but have voted majority Democratic and steadily more Democratic in each subsequent presidential election. Ong says many Asian Americans initially felt more connected to the GOP because the Republicans were viewed as strongly anti-Communist, but that with time and generational replacement this connection has weakened — a trend they share with Cuban Americans. Today, Vietnamese Americans still lean more Republican than other subgroups, with Filipinos and Japanese and Indians tilting heavily Democratic.

A record 25 Asian Americans are running for Congress this cycle: 24 for the U.S. House, plus U.S. Senate candidate and current congresswoman Mazie Hirono of Hawaii. The vast majority of these candidates are Democrats (21) and, as might be expected, almost a third of them (eight) are Californians. Despite greater representation on the ballot, Asian American voter turnout is historically low — especially given their socioeconomic status, which, all else equal, should generate a higher turnout. “A huge paradox is that, with their high levels of education and income, their voting participation rate is among the lowest, even among adult citizens, and their campaign contribution rates are only on par with the national average,” Karthick Ramakrishnan, a political scientist at the University of California, Riverside, and co-author (with Janelle Wong, Taeku Lee and Jane Junn) of a 2011 book about Asian American political attitudes based on the 2008 National Asian American Survey (NAAS), told me via email. (For details on participation rates, see Table 1.1 here.)

The primary reason for the lower-than-expected turnout, explains Ramakrishnan, is that Asian Americans are the most heavily immigrant electorate; that is, they have the highest share of first-generation arrivals. In fact, the immigrant proportion of the overall Asian American population is about 1.5 times higher than Latinos. Like the generational effects on religious conversion, there are important differences between Asian Americans who immigrate to the United States and those who are born as first-generation Americans.

Compared to the general public, a higher percentage of Asian Americans (55 percent to 41 percent) prefer a bigger, more active government. They are also “more ‘liberal’ on abortion and gay marriage than the general population,” notes Ramakrishnan, though he cautioned that the recent Pew results showed Asian American opinions to be closer in line with Americans overall on these issues. As with other groups, whatever their racial or ethnic background, he noted that “religious identity matters,” with Catholic Asian Americans less likely to identify as Democrats and thus less likely to support abortion. Still, Ramakrishnan emphasized that “these issues are very low priority for Asian Americans.”

Overall, the Asian American vote remains fluid as a result of its ethnic, religious and national heterogeneity, and the often stark differences between immigrant and first-born generations of Asian Americans. So: How will their votes affect the 2012 presidential race, if at all?

In a close election, of course, any and every group can be pointed to as pivotal. And it’s still true that African-American voters — especially in the Obama era — exercise greater influence, especially given their geographic distribution and their status, for now at least, as the largest racial minority group. Ditto for Latino voters, whom the Republicans still hold out hopes of winning and who will soon surpass African-Americans as the largest non-white voting bloc.

Nevertheless, and despite the fact that their concentration in reliably blue California limits their potential clout, the Asian American swing vote is growing in importance. Like 2008, this year’s presidential focus will again be on the 19 combined electoral votes of Nevada and Virginia, the two swing states with the largest Asian American population shares: 8.4 percent and 5.6 percent, respectively. Obama, who boasted about his Hawaiian and Indonesia connections in a speech this past May to the 18th Annual Gala for the Asian Pacific American Institute for Congressional Studies, could amass 270 electors without winning either state. But it’s very unlikely that any winning combination of states for the president will exclude both.

Depending upon how competitive the Obama-Romney contest is in Nevada or Virginia — and if Asian Americans are able to overcome their historically low turnout rates, perhaps with a boost from additional outreach and invested resources from the Obama campaign — 2012 could finally be the year Asian American voters and congressional aspirants finally get their due.