Jess Walter: Write what you want to read

Walter's latest offering, "Beautiful Ruins," is the result of a novelist working at the height of his powers 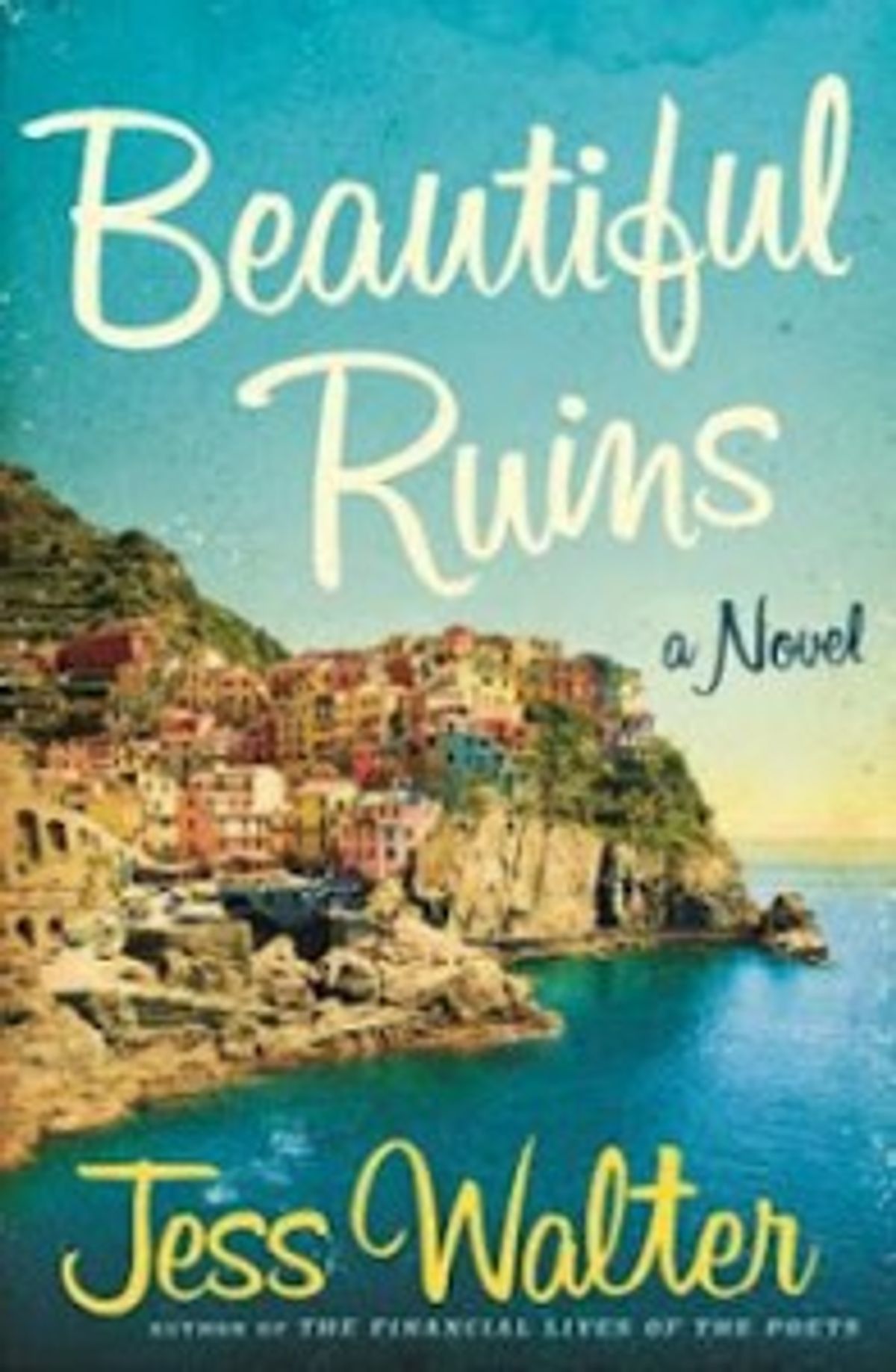 If there’s something  Jess Walter can’t do as a writer, I’ve yet to encounter it. He can craft plots for detective novels, wax poetic and profound on any number of topics, tackle topics from the election of 1980 to 9/11, and just plain crack you up. His last novel, "The Financial Lives of the Poets," was riotously funny but also disturbingly serious, leaving me with knots in my stomach for days afterward (it also inspired my first TNB interview). "Beautiful Ruins," his latest and perhaps his most ambitious offering, is, simply put, the result of a novelist working at the height of his powers.

Jess was kind enough to answer some of my questions:

I’m curious about the first and only chapter of Bender’s (brilliant as advertised) book that appears in "Beautiful Ruins."  Is that something you wrote separately and wanted to include, or did you write it specifically for "Beautiful Ruins"?  In other words, what came first, that story or the book?

The book came first. I started the novel that became "Beautiful Ruins" so long ago (1997), and had so many different versions, that the order of things is hard to trace. Early on, through about 2001 or so, all I had was a single chapter or two (and then three) of Dee arriving in Pasquale’s town (very different from the final first chapter) and I couldn’t seem to get past those first chapters: a woman arrives in a small Italian town and meets this man, and she’s sick and uh, then … uh … uh … I didn’t know what happened next. I also had a problem: I’d named Pasquale’s pensione The Hotel Adequate View but this was such an un-Italian thing to do (false modesty, or really any modesty, not exactly being an Italian trait) so then I had to create a sly American who could name the hotel. At first, this Alvis Bender was a big blustery travel writer, but the book became more wistful over time, more about regret and unfulfilled dreams, and I realized Alvis might have my problem: an ambitious first chapter that he couldn’t get past. This haunted version of Alvis just fit better as the book formed in my imagination. Then my question was, What’s his story? And I’d just read a nonfiction book about black soldiers in Italy and so I imagined Alvis in that world, wrote it, rewrote it again in 2006 and 2009, and again …

Hollywood legend Michael Deane, who rises from PR guy extraordinaire to the aging producer of an odious web-cast dating program called Hookbook, rises to prominence by suggesting that the marketing of the film Cleopatra, which was hemorrhaging money, focus on the real-life Richard Burton-Elizabeth Taylor drama, rather than the movie itself.  You seem to suggest that the Cleopatra PR was the starting point of today’s reality-TV-based culture.  What gave you that idea?

The series of decisions that leads to something like that is so random. Basically, I’d been to the Cinque Terre in 1997 and fell in love with it, but wanted to write about it before it was rediscovered by tourists. My mom was dying of stomach cancer and had never gotten to see Italy and my first impulse was to show my mother this place I’d seen. So I imagined a young woman about her age arriving in this tiny village in the early 1960s. But I didn’t want to write about my mom, so the next question was, who is this woman? I’d started thinking about Fellini’s 1950s/60s Italy and the idea of fame, so she became an actress and the next question was What’s going on in Italy at that time that could involve an actress? That led me to "Cleopatra" being filmed in Rome, and my research fell into one this great hole: Cleopatra/Burton/Taylor, and the amazing discovery for me was that this film that was called the biggest boondoggle in Hollywood history had actually broken even or made a little money. And it was clear, to me anyway, why: this modern idea of fame/infamy. And this gave me the character of Deane–the inventor of all things Kardashian. By this time, I’d had three or four Italian chapters of what I called ’The Hotel Adequate View’, and it was maybe about 2004 or so, and the story really opened up at that point.

Richard Burton appears in the book, to great effect.  How much research did you do on him?  How many of his films had you seen, and did you watch after you decided to include him as a character?  I love that the title comes from the piece describing Burton on Dick Cavett (I watched the clips on YouTube…there are worse people to be on a boat off the coast of Italy with).

I always do a lot of research, immerse myself so that I believe it, then set the nonfiction aside and let it become fiction. So, yes, I read books and watched Burton films and interviews and, my favorite, old footage of him on stage (Burton’s "Hamlet", in black and white, filmed from a distance with an unmoving camera, is stunning … you can’t believe the power coiled in that body and voice, especially when compared to the craggy old sot who appears in that Cavett interview). His relationship to his art (acting) and fame really hovered over the entire novel, over all the characters and their attempts to express themselves through novels and stories and music and plays and acting and painting. He was sort of a talisman for the book but I didn’t know if the chapter with him in it would make sense. I wrote and jettisoned so many chapters along the way (including Dee dying in the 1980s and even a po-mo chapter in which I entered my own book to pitch a film version of "The Zero" … it was like crawling down a hall, finding a closed door, then backing up and trying another hall. But as soon as I wrote Burton, I felt like I was crawling in the right direction.

Oh, man, I’d LOVE to read that po-mo chapter. Can you put it as an Easter egg on your website or something? And speaking of movie pitches, "Beautiful Ruins" contains a healthy dose of Hollywood cynicism.  What is your own relationship to Hollywood?  Are there adaptations in the works?  Because I’d rather watch a film version of any of your books that another fucking superhero movie.

I think it contains both cynicism and hopefulness, which is my basic reaction to the place. It’s funny: the usual Hollywood portrayal is overly cynical, I think, which is kind of boring in the end and only half of the story. What I loved about Claire and Michael Deane is that she is the cynic and he, for all his cruel machinations, is endlessly hopeful. For me, movies and television are interesting because they are the dominant storytelling form of our time. My first love will always be fiction, and especially novels, but I’m a writer … I write poetry and essays and criticism and I’d love to write a whole play, and sometimes I even write scripts. My first book, about Ruby Ridge, was made into a miniseries on CBS in 1996, and since then, I’ve dabbled in Hollywood, pitched a few things, sold a couple of screenplays and a pilot that I wrote with a buddy from Spokane, flirted with seeing "Citizen Vince" as a film, and most recently, adapted "The Financial Lives of the Poets" as a script. It’s supposed to go into production as an indie film in November, with Michael Winterbottom directing and Jack Black starring. I’ve managed to work there just a little bit, but with really great people (the hopeful side) and my experiences have been just fine, but with cynical moments spliced in. That said, I think most Hollywood meetings are silly and I truly despise pitching. It’s insane to expect someone to come in and tell you the story before they’ve written it, and buying an idea from someone who can explain it rather than write it is like choosing a mechanic based on his ability to draw a picture of your car’s problem.

Readers of my first novel,"Totally Killer"—all seven of them—often compliment it by saying “Wow, this would be a great movie,” as if this is the highest praise a book can receive.  I’m sure you get this, too (see my previous question).  What are your feelings about that, the novel-as-protracted-film-treatment notion?

People sometimes ask who I would cast in my books and I never have any idea. I don’t think I could ever write a book thinking of it as a movie the whole time. This would be like building a house and filling it with furniture just so you could have blueprints. I did try to write "Citizen Vince" as a script before the novel, but it never really came around until I wrote it as fiction. And by then I’d thrown the script aside and didn’t really think of it. A novel, to me, is animating the story. A film can also animate the story, but it’s such a different kind of animation. I write novels because I love the form, because it’s my favorite kind of storytelling to encounter and to practice, because I want to create for readers the experience of reading that I’ve had reading novels–that complete immersion and emotional connection. I also love film, but it’s not really the writer’s medium. A great script is necessary–and I think people underestimate the importance of the screenwriter–but so many other things have to click into place for a great film: acting, directing, etc … I love the film "One Flew Over the Cuckoo’s Nest" and I love the book "One Flew Over the Cuckoo’s Nest" but they couldn’t be more different.

Well put. On your site, you do haiku reviews of books. Give me a haiku review of "Beautiful Ruins".

review your own book

Although Alan Dupree makes a cameo in "Beautiful Ruins," this is the least—let me use the MFA term here—detective-y of your novels.  In fact, if I were to plot the percentage of “detective” in your books on a graph, we would see an overall decline.  Have you lost interest in the form, or are you just saving it up for a return to the genre to win another Edgar award?

Ha! Yes, it’s all part of a master plan that ends with me winning a daytime Emmy and being elected Sheriff of Boundary County, Idaho. No, I really don’t think about it that way. I just … write. I started the novel that became "Beautiful Ruins" before any of my published novels (I was also writing a novel about a single father) so if I’d finished one of those first first, then maybe "Over Tumbled Graves" would have been the departure. Back then, because my first book had been a nonfiction book, I remember being described as ”true crime specialist” Jess Walter and thinking, One book makes you a specialist? (Eat one lousy foot, they call you a cannibal.) But at the same time, I was writing domestic short stories and comic short stories and noirish fiction and comic fiction and essays and … well, everything. Now I’m kind of embarrassed that I ever spent time thinking about how people describe me. I think it’s healthiest and most productive to just write the next thing you want to read.