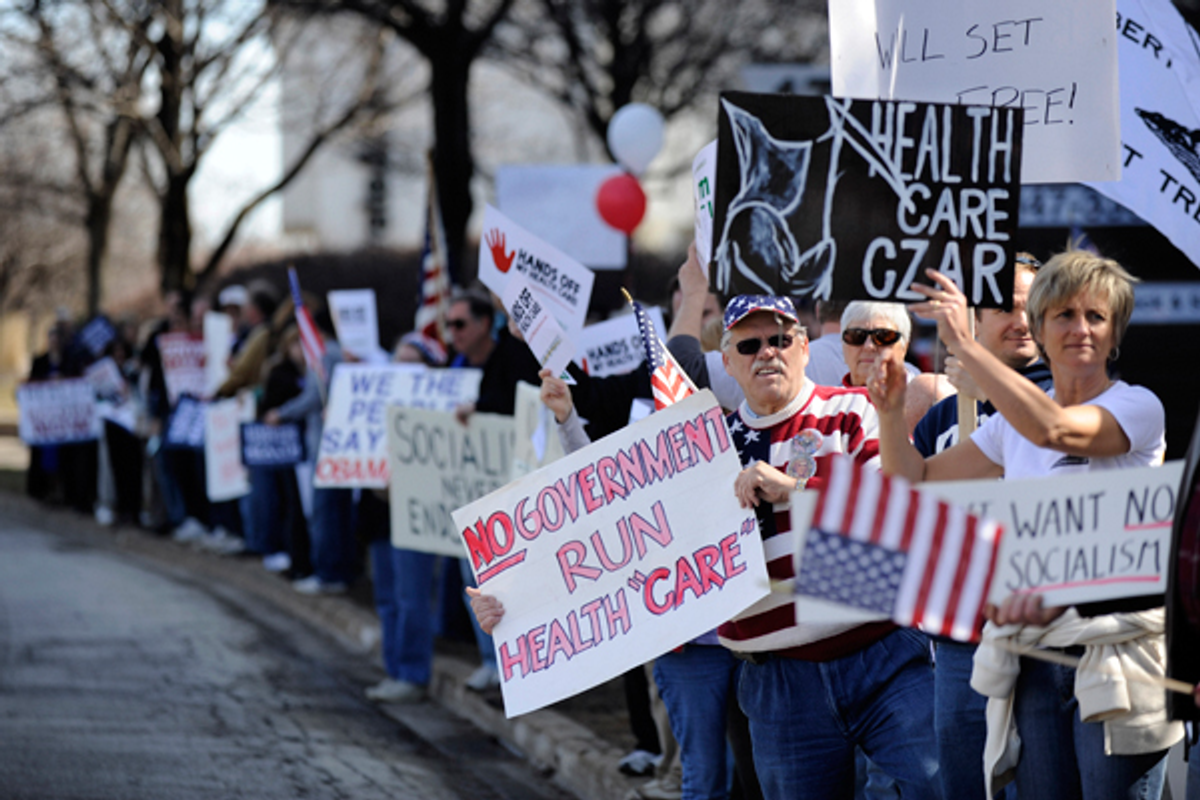 Despite a  defeat in District Court last week, the Catholic Bishops and their  conservative Protestant allies  are forging ahead  with lawsuits against Obama's health care reforms. Their goal? To ensure that American health options are dictated by religion rather than medical science. With an infallible pope and an inerrant Bible as guides, they are convinced that they  know what God wants.

Then again, if they could, some Church leaders would do away with much more than the contraceptive mandate. Christian Science theologians teach that God’s will excludes most of science-based medicine because prayer alone should suffice. In fact, they  have tried  to get the services of “prayer practitioners” reimbursed under federal health care laws. Like Catholics and conservative Protestants, they find basis for their belief in ancient texts:  Is any sick among you? Let him call for the elders of the church; and let them pray over him, anointing him with oil in the name of the Lord: And the prayer of faith shall save the sick, and the Lord shall raise him up ( James 5:14-15 ).

Throughout the Bible, both Old Testament and New, physical health is largely a spiritual matter.  Healings come from prayers, rituals of repentance, and miraculous intervention. In Chronicles King Asa, who has a severe foot ailment, is held up as a bad example for seeking help from physicians and not from God. By contrast, King Hezekiah prays when he falls ill, and Yehovah  adds fifteen years  to his life.

For those who don’t want simply to pray and wait, the Bible does actually prescribe or describe a variety of healing practices. Unfortunately, healthcare in the Bible, perhaps more than any other topic, reveals the authors to be men of their time—the Iron Age.

If there were any room to doubt, a quick overview of biblical health care is a great reminder why Abrahamic religion should  not be dictating national health policy :

Dermatology: banishment and dove blood.  Based on the level of detailed attention it receives in the Bible, dermatology might appear to be the most important medical specialty. Two chapters of Leviticus spell out the assessment and treatment of visible skin infections, which, given the descriptions, might include skin cancers, leprosy, cystic acne, or psoriasis. Such infections must be diagnosed by a priest:  Anyone with such a defiling disease must wear torn clothes, let their hair be unkempt, cover  the lower part of their face and cry out, ‘Unclean! Unclean!’ As long as they have the disease they remain unclean. They must live alone; they must live outside the camp. (Leviticus 13:45-46 ). Later, the priest finalizes the healing process by killing two lambs or doves:  The priest is to take some of the blood of the guilt offering and put it on the lobe of the right ear of the one to be cleansed, on the thumb of their right hand and on the big toe of their right foot (Leviticus 14:14).  In a  second ritual  the patient is sprinkled with blood that has had a scarlet string, the herb hyssop, and a live bird dipped in it.

Treatment of skin wounds may include the use of bandages and soothing balms, but most cures recorded in the biblical texts are faith healings. In one story, a foreign military leader Naaman gets rid  of his skin disease after dipping seven times in the Jordan River on the advice of the seer Elisha. (Both the number seven and the Jordan have special powers throughout the Bible.) However, the story is a tribute to the power of the Hebrew God, not any general prescription for healing.

Obstetrics and Gynecology: words of encouragement. Midwifery is a clear part of Bible-based medical practice, though without modern tools the power of the midwife is limited. At the birth of the patriarch Benjamin, a midwife offers his mother Rachael encouraging words right before she dies from postpartum hemorrhaging: “Do not fear, for now you have another son” (Genesis 35:17). In another story, a midwife ties a scarlet string around the hand of one twin to distinguish which came out first.

Menstrual and post-partum bleeding are considered unclean, and a woman is unclean for twice as long after giving birth to a girl as a boy. Cleansing rituals are prescribed for any man who has sex with a menstruating woman or even touches something she has contaminated, but in the absence of science-based medicine, no procedures are recommended to give women means to reduce or avoid bleeding.

Fertility: mandrake roots and prayer. The mandrake plant was widely believed to have special powers long before J.K. Rowling wrote it into her Harry Potter books. It appears in the book of Genesis as a fertility agent. In Genesis 30, two sister wives (literally) are competing to produce male offspring, and they turn to the powers of the mandrake.

Ophthalmology: spit and mud.  In the Old Testament, the primary objective in managing vision defects is to ensure that people with bad vision don’t defile sacred spaces or the halls of power. They are not excluded from town, like people with skin infections, but they are excluded from the temple. However, in the New Testament, Jesus heals several blind men. To do so, he calls on a combination of faith, spit, and mud (John 9:6). This technique would have been familiar to Greek and Roman readers of the Gospels, since the Greek god-man Asclepius was said to heal the blind in a similar fashion.

Orthopedics: isolation and exorcism. Like ophthalmology, the primary goal of Old Testament orthopedic management is to keep defective people from contaminating sacred spaces or food offerings:

However, acute injuries were treated differently; there is at least indirect evidence that splinting was standard practice for broken bones. In the visions of Ezekiel, unsplinted broken bones are a metaphor for political weakness: “Son of man, I have broken the arm of Pharaoh king of Egypt; and, behold, it has not been bound up for healing or wrapped with a bandage, that it may be strong to hold the sword.” (Ezekiel 30:21)

At least one New Testament story suggests that orthopedic problems can be caused by demon possession, which would suggest exorcism as a solution.  And there was a woman who for eighteen years had had a sickness caused by a spirit; and she was bent double, and could not straighten up at all. When Jesus saw her, He called her over and said to her, “Woman, you are freed from your sickness.” And He laid His hands on her; and immediately she was made erect again and began glorifying God.

Psychiatry and Neurology: more exorcism. Psychiatric and neurological problems in the Bible are attributed to demons, which unlike the monsters of modern horror movies, almost always cause symptoms we would recognize today as medical syndromes. In the Old Testament, such accounts are rare, and an evil spirit may be sent by God himself. But in the New Testament, demon possession becomes a prominent theme. Demons can cause muteness, epilepsy, and abnormal strength; they can inhabit animals and more than one can inhabit a single person. Typically, fortunately, they leave when commanded to do so, either by Jesus or by a Christian in the name of Jesus.

Preventive Care: worship, worship, worship. Rather than nutrition, exercise and sunscreen, biblical preventive care focuses primarily on pleasing God or at least avoiding his wrath. In no uncertain terms the writer of Deuteronomy reminds readers who is in charge. There is no other God beside me; I kill and I make alive; I wound and I heal. (Deut. 32:39).Righteousness has great health rewards: Worship the LORD your God, and his blessing will be on your food and water. I will take away sickness from among you, and none will miscarry or be barren in your land. I will give you a full life span (Ex. 23:25-26). But on the other side of the equation are illness, injury and hemorrhoids. The LORD will smite thee with the botch of Egypt, and with the emerods, and with the scab, and with the itch, whereof thou canst not be healed (Deuteronomy 28:27).

Above All: Patience.  Ultimately, the trump card in biblical health care is the promise of Heaven, with incorruptible bodies that experience neither hunger nor thirst, sickness nor death. In one prophetic vision, the writer of Ezekiel describes a utopian version of the Promised Land. In it, a great river flows, providing an unending bounty of nourishment—and medicine: By the river on both banks (shall be) every type of tree fit for food. Their leaves shall not wither, and its fruit shall never cease. Every month it shall renew its fruit, for its waters spring from the Temple itself; And its fruit shall be fit to eat, and its leaves (shall serve as) medicine.” Ezekiel 47:12

The dream of beauty, sufficiency, and wholeness conjured by Ezekiel is enough to make even an old skeptic like me a little wistful. If only dreaming worked, and mandrakes and dove blood and prayers. Then we wouldn’t need contraceptive coverage – or the rest of Obamacare for that matter.

Valerie Tarico is a psychologist and writer in Seattle, Washington and the founder of Wisdom Commons. She is the author of "Trusting Doubt: A Former Evangelical Looks at Old Beliefs in a New Light" and "Deas and Other Imaginings." Her articles can be found at Awaypoint.Wordpress.com.