Is it the bikinis? 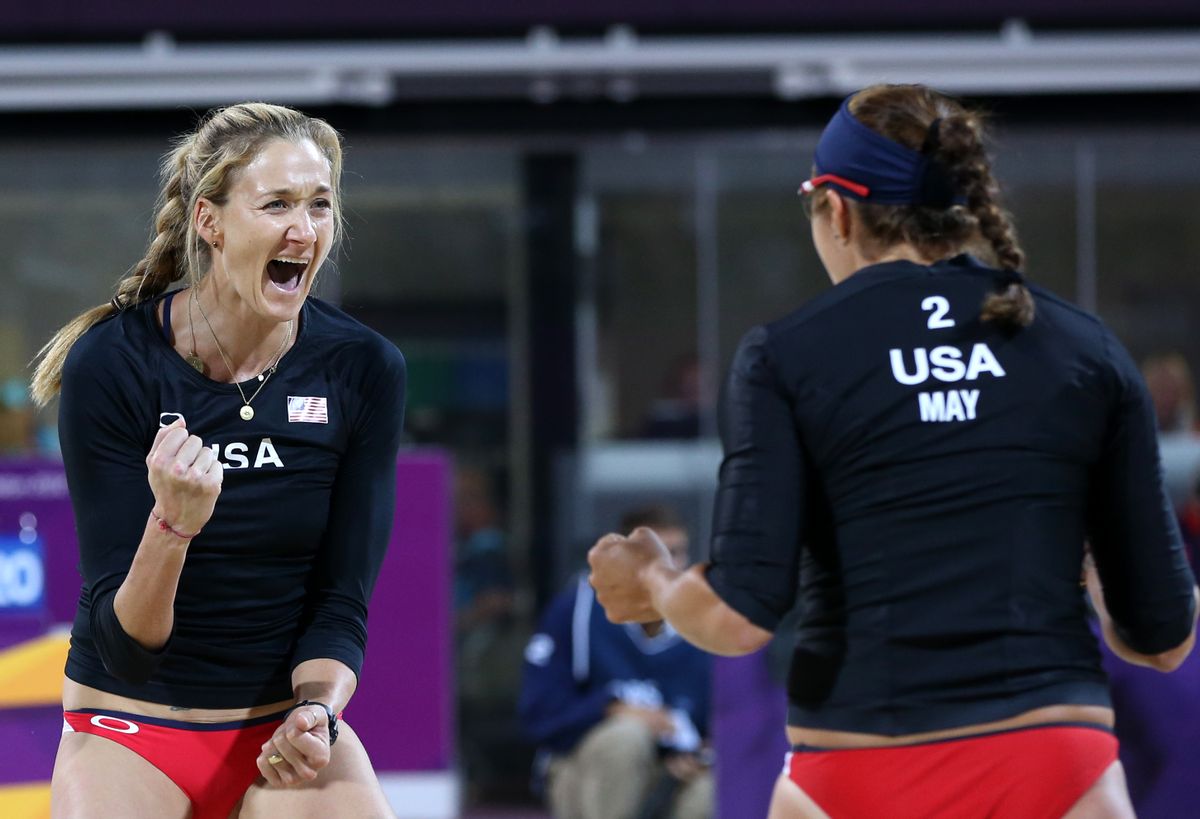 The hot ticket in London is beach volleyball – well, women’s beach volleyball – but interest is high for the men’s game, too. How popular? A spokesperson for the British prime minister told reporters, “I can confirm there is no direct line to the beach volleyball from No. 10.”  That’s Ten as in Downing Street, which is right next to the Horse Guards Parade. The court is actually in Cameron's backyard. “But I’m sure he will be getting out and about and enjoying the sport.” Later in the day, Cameron’s spokeswoman said she thought that her boss “Probably had a peek.”

Beach volleyball has only been an Olympic event since 1996. But, as the Times – that’s the London Times – reported yesterday, “It's quickly becoming a crowd-pleaser.”

And not merely the crowd, but the right crowd. After spending all day at Monday’s matches, Prince Albert of Monaco gushed to a BBC reporter, “I’m such a fan, I built my own court.  It’s just fantastic.”

So let’s be honest. Much of the boost in the game’s popularity has come from the dress code. This is, after all, the only Olympic sport in which bikinis are, well, uniforms. It’s also the only sport with flexibility for religious and cultural requirements. The  International Volleyball Federation has modified its dress rules to “allow shorts of a maximum length of 1.18 inches above the knee and sleeved or sleeveless tops.”

Bikinis have proved far more popular, and a lot of writers even complained when Americans Kerri Walsh and Misty May-Treanor donned long-sleeved shirts to brat the chilly London fog. I found it a fetching look with the bikini bottoms.

Believe it or not, there are volleyball purists who scorn the sandy version. They have a point, I think, if you’re talking about strategy and tactics. Standard Olympic volleyball has six players to a side and allows for an amazing number of possibilities on both on offense and defense. (Sometimes the players can spend so much time slapping the ball to each other on a shot that you feel you can check your phone messages while waiting for the ball to go over the net.) It’s great game, but it doesn’t have bikinis and sand.

But the sand, in truth, is as much an attraction as the bikinis; it allows players to make incredible leaps and stretches without fear of hitting a hard surface. The hardwood game is more cerebral.  The beach game is more athletic – played by the best players (like our own Kerri and Misty) with wild abandon.

The sand in this case provided by the Hutcheson Sand and Mixes in Huntsville, Ontario. Why not sand from, say, from Miami Beach or somewhere in Australia – you know, someplace known for sand?  As it turns out, the sand from Ontario is regarded by sand experts as the best in the world for color and consistency. Golf courses in Dubai, which has a lot of its own sand, want to fill their sand traps with the very best and actually import it from Ontario. If beach volleyball continues at this rate of popularity, you might want to think about buying some stock.

What’s really odd about this phenomenon is that so many cold countries are now fielding beach volleyball teams, like Poland, for instance, whose male duo beat our boys, Jake Gibb and Sean Rosenthal, on Monday. How can a team from the United States lose to a team from Poland in a sport in which the word beach is used? Tropical countries don’t dominate the winter Olympics – except those Jamaicans they made a movie about. How did beach volleyball catch on in Poland?

I don’t know, but I can’t remember the last time a politician such as London mayor Boris Johnson let loose with a ringing endorsement, like this one written for The Daily Telegraph: “As I write these words there are semi-naked women playing beach volleyball in the middle of the Horse Guards Parade immortalized by Canaletto. They are glistening like wet otters and the water is plashing off the brims of the spectators’ sou’westers. The whole thing is magnificent and bonkers.”

Someone should grab “The Wet Otters” as a  team name for Britain’s first pro beach volleyball franchise.