Will Texas execute a man who thinks speakers broadcast his thoughts and Kim Kardashian was a witness to his crime? 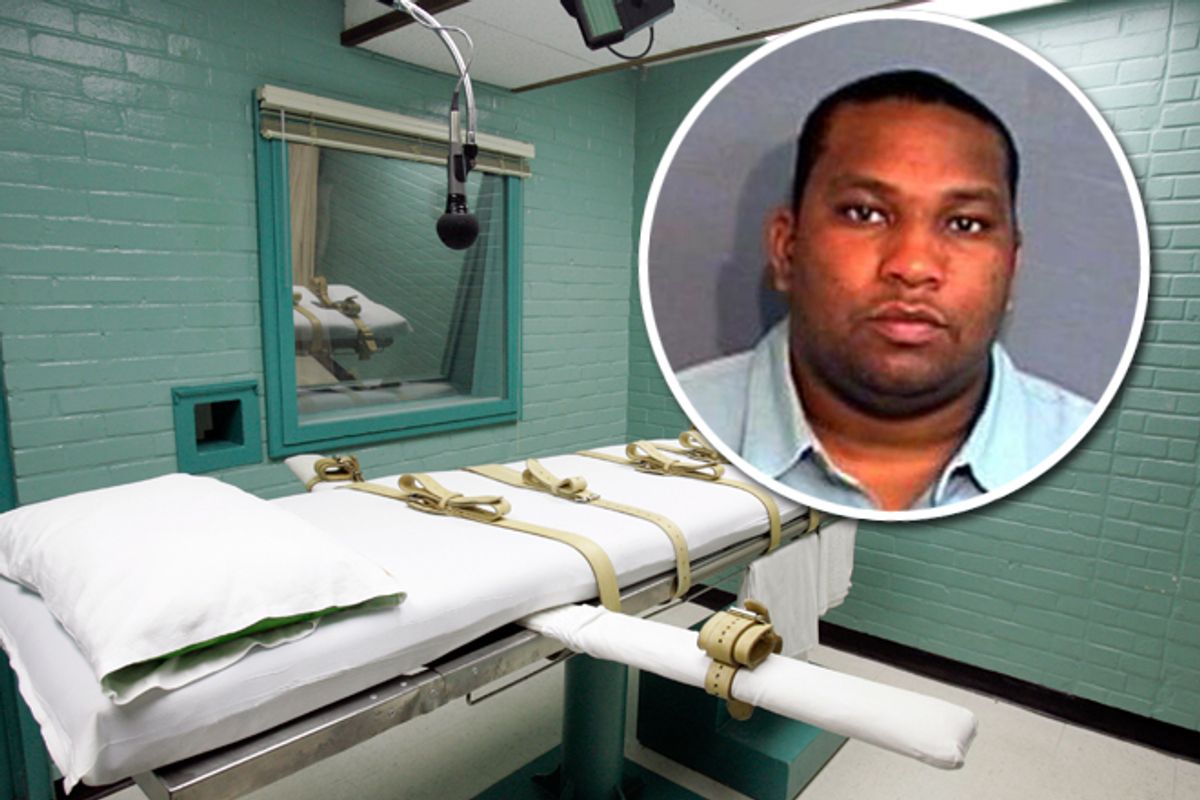 Marcus Druery, a 32-year-old Texas death row inmate, suffers from schizophrenia so severe that his lawyers argue he is not competent enough to be put to death. Early Friday evening, just days before his Aug. 1 execution, the Texas Court of Criminal Appeals granted a temporary stay of execution pending further review of his competence.

Druery’s stay was granted the same week as that of a mentally disabled Georgia death row inmate, Warren Hill. Earlier this month, Hill was denied clemency despite a 2002 Supreme Court decision that ruled executions of the mentally disabled unconstitutional. In an unexpected turn, the Georgia Supreme Court halted the execution just 90 minutes before Hill was scheduled for lethal injection, not because of his intellectual disability, but due to a change in the state’s method of injection. Hill’s pending execution, which will be revisited in November, provoked nationwide outrage, and rightly so. In stark contrast, Druery’s pending execution has received little attention outside local and regional outlets.

Druery was sentenced to death in 2003 for killing, robbing and then setting fire to Skyylar Browne, his classmate at Texas State Technical College. During his incarceration on death row, he has been diagnosed with schizophrenia by several mental health professionals, including prison psychiatrists. His symptoms include paranoid and delusional thoughts and auditory hallucinations, which have distorted his ability to comprehend the reality of his crime and punishment.

His attorneys, Katherine C. Black and Gregory W. Wiercioch of the Texas Defender Service, argue that executing him would violate the Constitution as determined by the Supreme Court in Ford v. Wainwright (1986) and upheld in Panetti v. Quarterman (2007).

Under Ford v. Wainwright the Supreme Court banned the execution of the mentally ill, ruling that it violates the Eighth Amendment. Furthermore, it ruled that the mentally ill are entitled to a competency hearing, which includes a competency evaluation by two independent experts and an evidentiary hearing in court to determine if the inmate is sane enough to die.

Katherine Black told Salon, “Any decision on his case will be important in determining the threshold showing for mental competency.”

Based on letters he has written and his discussion of facts of the case, he's aware ... On June 29, there was a hearing in which defense counsel allowed the trial court judge to talk to Druery and ask him questions ... He said he did not commit the crime. That shows that he is aware that his execution is imminent and that it's for the murder of Skyyler Browne.

But Black says Druery’s awareness of his upcoming death sentence is not the same as having a “rational understanding” of why the state wants to execute him. As evidence, she points to the Supreme Court decision in Panetti v. Quarterman, a case brought forward by another psychotic inmate who was nearly executed by the state of Texas.

Panetti had schizoaffective disorder, causing delusions that led him to believe the state wanted to kill him to stop him from preaching. Though Panetti recognized the factual rationale behind his death sentence — that he was found guilty of murdering his ex-wife’s parents — the Supreme Court held that “[a] prisoner’s awareness of the State’s rationale for an execution is not the same as a rational understanding of it.”

The court reasoned that executing a prisoner who “has no comprehension of why he has been singled out and stripped of his fundamental right to life” undermines the concept of retributive justice. “There’s no retribution for someone being executed when they think it’s for something that has nothing to do with the actual crime,” explained Black.

Druery’s failure to understand his legal circumstances was verified by Diane Mosnik, a neuropsychologist specializing in schizophrenia who was hired by the defense with court funding to conduct a comprehensive psychological assessment of Druery in May. “Because of his inflexible, psychotic and delusional interpretation of his circumstances, Mr. Druery does not have the capacity to rationally understand the connection between his crime and his punishment,” concluded Mosnik. “Although [Mr. Druery] has a factual awareness that an execution date has been scheduled for the crime for which he was tried, he does not believe that he will be executed because of his illogical, fixed, and firmly held delusional belief system.”

Black and her co-counsel, Gregory W. Wiercioch, one of the lawyers who argued the Panetti case to the Supreme Court, immediately appealed Langley’s ruling to the Texas Court of Criminal Appeals, requesting that it be overturned and Judge Langley be required to hold a competency hearing. Late Friday, the CCA granted a temporary stay pending further review of the evidence.

Black told Salon that what “shocked” her most about Judge Langley’s ruling, which she called an “unreasonable declaration,” was how quickly he dismissed the evidence presented.

Black and Wiercioch spent months compiling evidence from over 5,500 pages of Druery’s prison and medical records, which they condensed into a digestible 36-page motion and 15-page supplement for the court.

According to those lengthy records, Druery began exhibiting signs of mental illness as early as 2004 and has been diagnosed with schizophrenia on several occasions by the state’s very own prison psychiatrists, which Black remarked should have been enough to reach the legal threshold. On top of that, he was hospitalized at the Texas Department of Criminal Justice psychiatric facility for a total of more than nine months between 2009 and 2011.

Even more compelling were the clips of letters, statements and complaints made by Druery detailing his paranoia and delusions.

For example, Druery is convinced that he is “wired” to speakers that air his thoughts. During a February 2011 clinical evaluation, he said,  “They refused to unwire me from speakers. I was hooked up to speakers system.”

In a letter to the Brazos court in early June, titled “May I have a stay because…,” Druery provides 21 reasons for why his execution should be halted, which included the following: “The witnesses need to be questioned properly. Such as Kim Kardashian who may be able to get Johnny Cochrans records about my life. (He was my atty. once before)”; “I’m one of the last surviving males of God’s lineage”; and, “I slept w/ DA Jarvis Parsons wife and he once used my money to  go gamble in Las Vegas and couldn’t pay it back.”

In an earlier letter received by the Brazos court in January, Druery complained, “An officer was trying to pull my kidney out of my body & was caught by Sgt. Horton while doing it.” On several occasions, Druery has claimed that Skyyler Browne shot him and several others the night of the murder. On other occasions he claimed that he was being held hostage by the assistant district attorney and that his food was contaminated with human feces and urine.

To Execute or Not to Execute?

Whether or not Druery is entitled to a full competency hearing currently rests with the Texas Court of Criminal Appeals.

Upon hearing that the CCA granted Druery a temporary stay, Black released the following statement.

“Executing Mr. Druery, who lacks a rational understanding of his punishment, would stand in clear violation of the Constitution. We are hopeful the Court will find that Mr. Druery is entitled to a full and fair hearing to present the evidence of his severe psychosis and establish his incompetence to be executed."

While Black is optimistic, she says they will appeal to the federal district court for a stay if Judge Langley’s ruling is upheld because executing a mentally ill man without a full and fair hearing would “violate all fundamental tenets of our Constitution.”

Meanwhile, Amnesty International has issued a call to action, urging people to sign a petition to stop Druery’s execution.