Thanks to Tea Party money, Ted Cruz is poised to upset the establishment candidate in Texas' Senate GOP primary 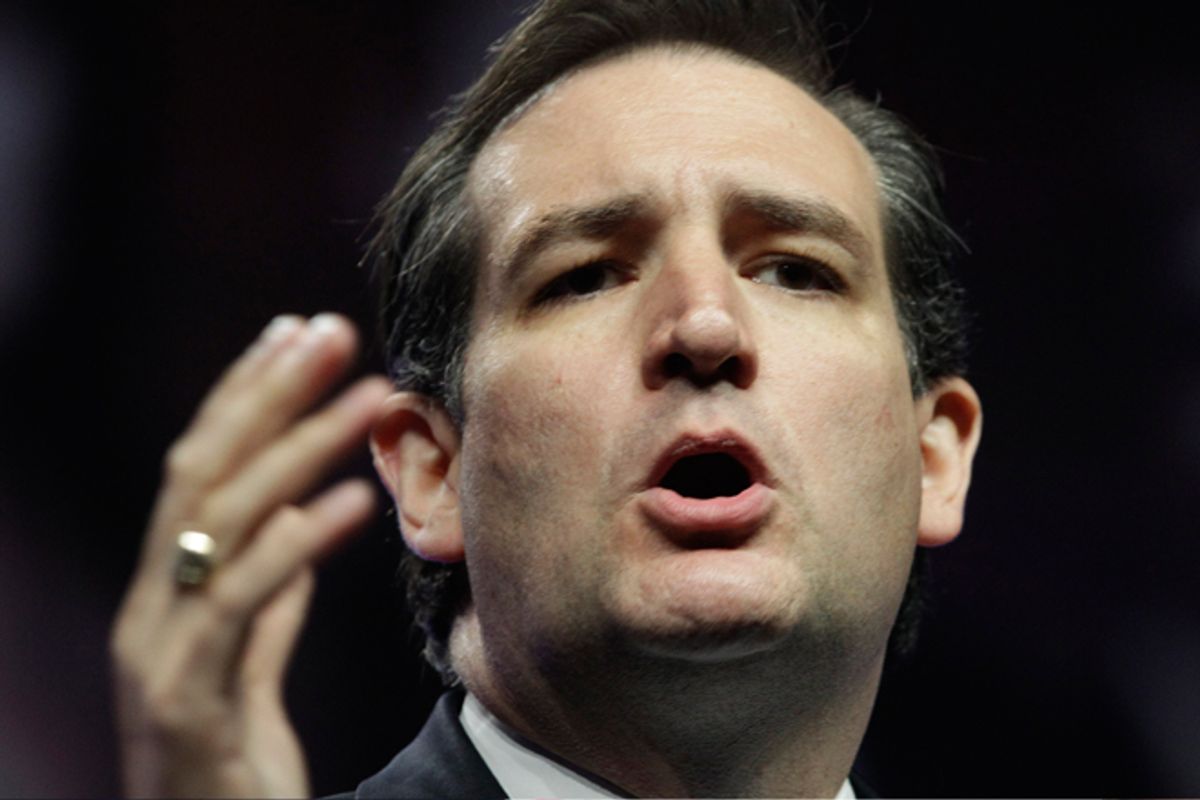 In a away, it’s the typical Tea Party story: An outsider who has never run for office before is about to beat the guy with tons of money and the backing of the state’s party establishment. If Ted Cruz wins today’s Texas Senate GOP primary runoff against Lt. Gov. David Dewhurst -- and polling suggests he will --  it’ll be one of the biggest Tea Party upsets yet, considering that Dewhurst isn’t even a moderate. But it’s not as simple as the grass roots versus the establishment. If Cruz wins, he’ll have national conservative groups to thank, who made his race their No. 1 priority.

Tea Party Express has sent dozens of email fundraising solicitations, sometimes several a day; the free-market Club for Growth spent over $6 million; and FreedomWorks organized a huge rally in Dallas last week that attracted national Tea Party favorites like Glenn Beck, Sarah Palin and Sen. Jim DeMint. “Without Super-PAC spending on TV, Ted Cruz would have been outspent approximately 7-2 in the final week of the campaign. With outside groups, pro-Cruz forces were only outspent approximately 3-2,” the Club for Growth boasts in a memo. These groups nationalized the race and put it on the radar screen of grass-roots activists everywhere more than they've done for almost any race this cycle

A win will show this new hybrid model to be extremely potent, but with dozens of potential candidates across the country, why did the national Tea Party groups coalesce around Cruz?

Brendan Steinhauser, who serves as FreedomWorks' top organizer as its director of federal and state campaigns, explained to Salon that it was a combination of having the right candidate and the right circumstances. First, he called Cruz a “phenomenal” candidate who has excited conservative activists by being a “bright, articulate conservative thought leader” in the vein of Sen. Mike Lee, the Ivy League-educated freshman senator from Utah.

Dewhurst is no RINO, but as Dave Weigel notes, there an “inescapable logic” in nominating Cruz, who at 42 could serve six or seven terms in the Senate. Dewhurst, at 66, would likely view the job as a “gold watch” after a lengthy career as a Republican loyalist.

Meanwhile, Cruz benefited from being in the right place at the right time. “You have to kind of think about this like a progression of battles,” Steinhauser said. “What we’ve tried to do is go from battle to battle in primaries, or the Wisconsin [gubernatorial recall race], and keep people focused nationally, almost like primary by primary.” FreedomWorks and its allies had previously focused on Republican Senate primaries in Utah, Indiana and Nebraska, and the calender meant Cruz was next in line. “It’s the perfect timing to focus activists nationally on this battle,” Steinhauser said, noting the late- July runoff date put it at a time when there are almost no other important races going on. That allows national activists to focus on Cruz full-time, giving money, making telephone call, and coming out to knock on doors.

Being from Texas is also a huge asset to Cruz, as conservative groups know that if he can win today, they're almost guaranteed to win the general election in November. “Texas is a very conservative red state. So you can get a 100 percent Tea Party conservative elected in the primary, they’re going to win the general no matter what, essentially. So the opportunity really presented itself,” Steinhauser said. This logic makes states with other key races, like Massachusetts, Maine or Nevada, far less attractive. It’s sort of the opposite dynamic from a general election, where activists will focus on swing states instead of non-competitive states like Texas. “This is the battle,” he said, referring to today’s runoff vote.