When he wasn't making hilarious gaffes, he was pushing all-too-familiar neocon lines 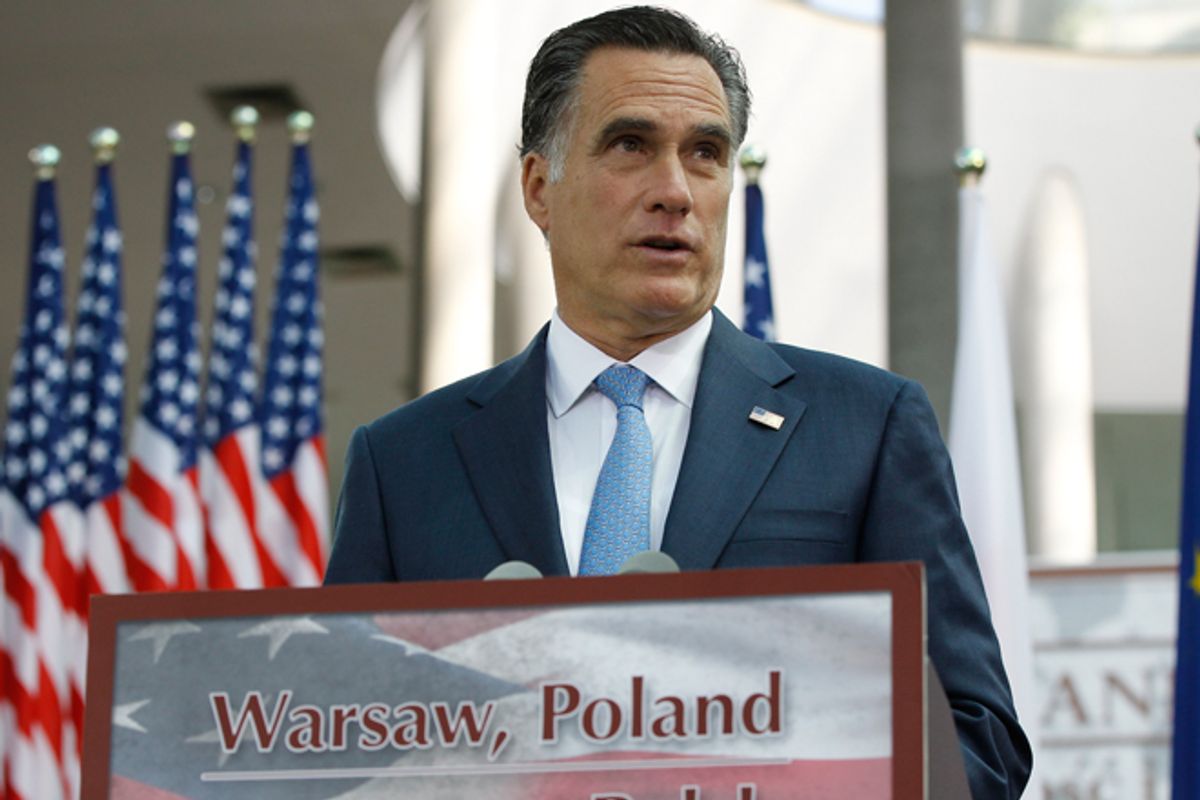 From uniting Brits behind their Olympics to making dicey remarks about his Anglo-Saxon heritage and Jewish cultural superiority, parroting Netanyahu on Jerusalem as Israel’s capital, and replaying the Cold War in Poland, Mitt Romney gives new meaning to the word "blunder," or as the French like to say, "faux pas." But the aristo-banker from Bain is not just being goofy. As tactless, offensive and wacky as he has sounded on his week-long whirl, he is most often telling American voters exactly what he wants them to hear, and much of it comes from the same neoconservatives  who brought us the war in Iraq.

Consider Romney’s growing reliance on his foreign policy advisor Dan Senor, who made his bones as Paul Bremer’s chief spokesman in the early days in Baghdad. Senor has since become a minor Wall Street figure with his own Bain-like private equity firm, Rosemont Capital, which he formed with Sen. John Kerry’s stepson, Christopher Heinz. He co-authored (with his Israeli brother-in-law) “Start-up Nation: The Story of Israel’s Economic Miracle,” while contributing regularly to Fox News, the Wall Street Journal and the Weekly Standard. And he joined with neoconservative luminaries William Kristol, Robert Kagan and Eric Edelman to found and direct the Foreign Policy Initiative, which has replaced the now defunct Project for a New American Century. Like vampires, neocons do not easily fade away.

Accompanying Romney on his road show, Senor became the story this week when he briefed reporters that Romney would support a unilateral Israeli strike on Iran. “If Israel has to take action on its own, in order to stop Iran from developing that [nuclear weapons] capability,” said Senor, “the governor would respect that decision.” Senor himself toned down his remarks, issuing a statement that “Gov. Romney recognizes Israel’s right to defend itself,” a position that Romney himself repeated in an interview with CBS. But the initial support for an Israeli strike was precisely the message the campaign wanted to leave in the mind of Jewish and Evangelical Christian voters back home: that Romney supported Israel more staunchly than did Obama. As Romney himself phrased it in his major speech in Jerusalem,

Make no mistake: the ayatollahs in Tehran are testing our moral defenses. They want to know who will object and who will look the other way. My message to the people of Israel and the leaders of Iran is one and the same: I will not look away and neither will my country.

The bullish Senor put an even deeper mark on policy by talking of the need to stop Iran from developing a nuclear weapons “capability.” Most of the debate so far has been about whether Iran was developing nuclear weapons, and what had happened to an earlier weapons program that the Iranians appeared to have closed down. That is a debate about facts, as shadowy as they sometimes are. But, as is the case with Germany, Japan and probably Brazil, any country that can enrich uranium (or reprocess plutonium) comes close to having a “capability” to produce weapons, whether they actually choose to have weapons or not.

Was Senor talking only for himself and his friends in Israel? Not at all. Romney fully embraced the new policy, telling the Veterans of Foreign Wars in Reno, Nev., the night before his trip that the United States should insist that Iran cease all enrichment of uranium. “A clear line has to be drawn,” Romney declared. “There must be a full suspension of any enrichment whatsoever, period.” This, of course, runs counter to U.S. policy reaching back to the 1950s, not to mention a universally acknowledged right to nuclear energy for peaceful purposes. But to Romney and Senor, these are only details that have no place in what they are once again calling  “An American Century.”

Romney’s visit to Poland similarly echoed vintage neocon themes with its rekindling of a Cold War spirit against Russia, which he previously described on CNN as “without question our No. 1 political foe.” He has also accused Obama of the “sudden abandonment” of Poland for temporarily delaying plans for a missile defense system in Eastern Europe. Romney pointedly met with the former Solidarity leader Lech Walesa, who had refused to meet with Obama during the president’s visit last year. Walesa warmly endorsed Romney, while Solidarity’s current leadership described the Republican candidate as hostile to unions and against labor rights. Romney also praised Poland’s limited government and commitment to free enterprise, but failed to mention the country’s continuing high unemployment.

In the meantime, Senor managed to stay out of the story, leaving it to Romney’s press spokesman Rick Gorka to have the final word at a visit to Warsaw’s Tomb of the Unknown Soldier. Pushed by reporters about Romney’s earlier gaffes, he exploded and told them to “Shove it!” and “Kiss My Ass!” Gorka later apologized for his remarks, though not for the campaign’s general unwillingness to make Romney available for questions.