Does Michael Phelps just hold it?

You know you want to know: Do swimmers pee in the pool? The first in our new series of Olympics rude questions 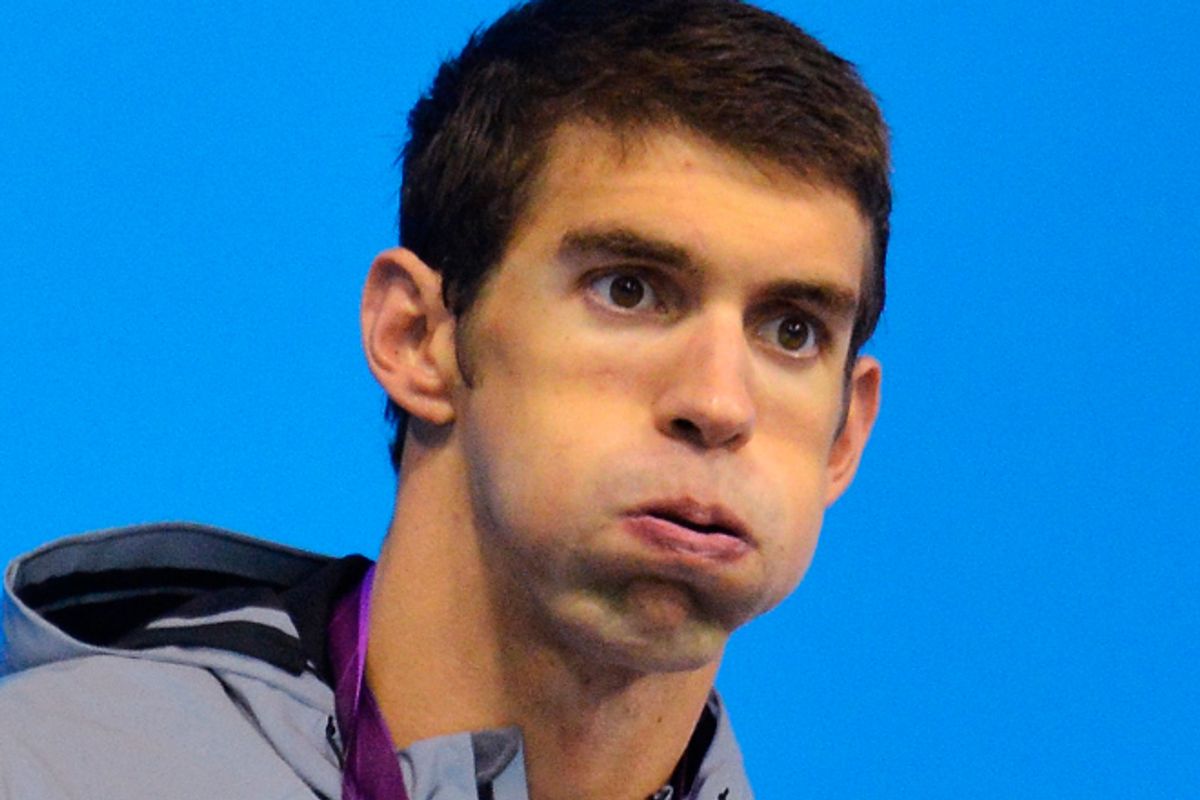 On Monday, Missy Franklin competed in two Olympic races in 15 minutes. She barely had time to get from one pool to the next, let alone make a pit stop along the way.

So it made us wonder: Since toilet trips can be a hassle – especially for those immersed in water and sheathed in nylon, might letting loose in the pool just be easier, particularly for elite swimmers in the thick of training? What's really going on underwater? More than you might want to know, it turns out.

“They don’t want to get out and miss the set,” said Bill, 28, a Canadian swimmer who raced at the Olympic Trials this year and spoke to us on the condition that we wouldn't use his last name.

Bill spent his childhood swimming for club teams and raced for a Division I school in the U.S. before returning to Canada to train for national-level butterfly and freestyle events. Although he did not admit to peeing in the pool, he knows others who did – in secret, mostly.

“No one talked about it,” Bill said.

One longtime teammate revealed his covert ritual to Bill after years of swimming together.

“He would jump in the pool, swim one lap, pee and then continue with practice,” Bill said.

The decision to forgo a proper toilet is more complex than it might seem, however. Status and time of year can factor into a swimmer’s habit.

“If you’re a freshman, you’re scared, so you don’t want to get out of the pool,” Bill explained.

At the Olympics, the situation is different. By the time swimmers arrive at the games they’re well rested due to a process called tapering, in which training is decreased over several weeks. A quick break during practice or warmup at the Olympics is no big deal.

“It’s not like you’re going to break down muscle, so you have time to get out of the pool,” Bill said.

As for location, it doesn’t matter much. Swimmers don’t mind polluting pools that aren’t their own. On intense training trips out of town, Bill said swimmers still peed in the pool.

“Some people just get used to it,” he said.

But all of that urine can have serious repercussions. Mick Nelson, the facilities development director for USA Swimming, travels the country talking to coaches about the importance of pool cleanliness. Nelson said he thinks everyone is peeing in pools: Kids, competitive swimmers and adult exercisers.

“Coaches are self-conscious talking about it in front of swimmers,” Nelson said.

Air quality inside natatoriums relies on water quality. Once the pool water becomes contaminated, no ventilation system can save the air around it. The cost of a new water treatment system to improve air quality in an indoor pool can cost up to $30,000, according to Nelson.

“Sweat and urine have an ammonia base. It stops the chlorine from reacting with the water properly,” Nelson explained.

If one person urinates in the pool, it’s enough to have an effect on 10,000 gallons of water for 12 days. Since most pools are 100,000 gallons or more, it’s crucial for pools to enforce no-peeing rules.

“You only need 2 or 3 percent of people to ignore this rule and I’ve got a problem,” Nelson said.